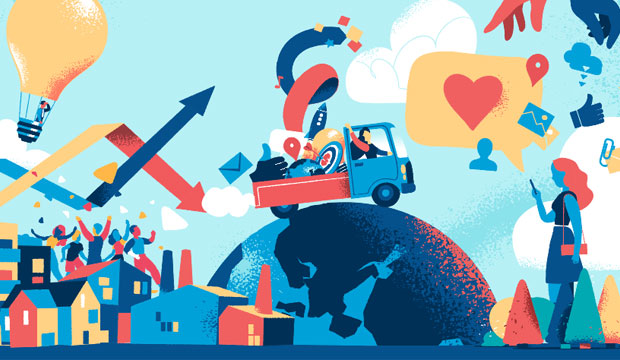 The CRM industry spent the better part of a decade building up the social aspect of CRM. Back in about 2004, I wrote a paper suggesting that capturing large quantities of customer data, analyzing it, and feeding the results to social media should be a big part of CRM’s future. That was before Twitter and Facebook were in the picture, and all we really had to point to when discussing social media were LinkedIn and Plaxo.

Nothing much happened in the social space for a couple of years after I wrote that paper, but eventually social took off. Paul Greenberg also caught the idea and wrote voluminously about it. His observations about social media culminated in an edition of his essential tome, CRM at the Speed of Light. Then, as if scheduled, social became a thing, followed by big data and eventually analytics.

The convergence of these technologies arguably is more important than the amalgamation of the CRM stovepipes under one flag that most vendors went for in the early days. Although the amalgamation was very important, it left us with new problems — like what to do with all that data and how to achieve a 360-degree view of customers. Data gathering and analytics answered those questions and quite a few more.

‘Not Helping the Discourse’

It’s troubling to see the tight situation much of social media finds itself in these days. It was a rough spring for Facebook with the Cambridge Analytica scandal, allegations that it played fast and loose with user data, and Mark Zuckerberg’s latest apology tour. Twitter has its own problems, and various pundits have questioned social media’s power.

Last weekend, Maggie Haberman, a respected New York Times journalist who has been covering Donald Trump for several years, announced in an op-ed that she was suspending her Twitter account.

“The viciousness, toxic partisan anger and intellectual dishonesty are at all-time highs,” she wrote in “Maggie Haberman: Why I Needed to Pull Back From Twitter.”

Her decision was based on “no reason other than that it’s not really helping the discourse,” Haberman tweeted.

“Twitter has stopped being a place where I could learn things I didn’t know, glean information that was free from errors about a breaking news story or engage in a discussion and be reasonably confident that people’s criticisms were in good faith,” she wrote in the op-ed.

Those words don’t require a lot of explanation.

Social Media Is Not an Unalloyed Good

That leads us to CRM. We’ve built CRM on a foundation of actually caring about customers, not because we’re noble people but because we know that customers have options and that they can go elsewhere.

A few years ago I wrote a book, Solve for the Customer, that takes a hard look at some of the failings of customer interfaces, which were rigid and brittle at the time.

CRM vendors knew they needed to get into social and all the rest as ways to cost-effectively deal with legitimate customer complaints. They certainly have, and the grousing about vendors that I reported on, which once was prevalent, now is hard to discern.

Still, I fear CRM could be tainted by the failings of social media and the bad actors who exploited social platforms. Today it seems especially important for CRM to separate itself from the worst aspects of social to the extent that we can.

There’s certainly a lot to say — from continuing to talk about the care we take of customer data to explicitly renouncing some of the tactics that the bad actors have made habitual.

I’m particularly concerned about using social media to provide negative reinforcement to people as a form of behavior modification. Much of what concerns me has been well explained in a new book by Jaron Lanier, Ten Arguments for Deleting Your Social Media Accounts Right Now.

The book is a primer for those of us who have no formal training in behavior modification and a warning sign for all that social media is not an unalloyed good, that we have to work at keeping it in its lane.

What all of this has in common is social’s business model of collecting data and selling targeted advertising. The business model doesn’t work anymore, or perhaps it works too well. The flip side of the model is that vendors give away social at no cost to the consumer who also becomes the product. We’ve seen all of this before.

In the early cloud computing era, it was not unusual to see vendors give away so many seats per month to attract early users. Going even further back, Bill Gates fought what then was an uphill battle to charge for software licenses.

In that era, PC software was handed around on diskettes without a thought to copyright, but Gates’ position was that it takes work to make software, and if you’re not willing to pay for it you’ll always be subject to bugs, lack of support, and myriad other things that make the difference between software as a business and software as a hobby.

Similarly, in cloud computing someone has to pay the bills for the service, and that’s the customer/consumer.

Social media has grown enormously over a very short time. It still operates in a business model that’s more hobby than business, at least where the consumer is concerned. However that conflicts in a big way with other software businesses that operate as, well, businesses, and that expect a level of professionalism from their partners.

CRM is especially vulnerable to outside agitation that questions its legitimacy if it gets too close to social. That’s already happened, though, and the CRM industry ought to, in a unified voice, tell the social mavens to update their business model.

Many no doubt will object, fearing a vast movement for the exits if social begins charging for its services. However, that worry might be ill-founded. Nobody quit using PC software after Bill Gates established it as a legitimate business, and Gates has done tolerably well in the process.

The same is true of cloud computing. No one seriously is considering going back to the on-premises world. So this is really a matter of timing. Is this the time to cut over to a more mature business model in which people pay for the service in return for greatly augmented security?

It’s a decision that will cause sleepless nights up and down Silicon Valley and elsewhere. Yet when big name users like Maggie Haberman and Jaron Lanier begin to desert you, when movements start advocating unplugging from vendors, and when the environment has turned toxic, these are clear signs of the initial collapse of the business model — and of some vendors, if they aren’t careful.