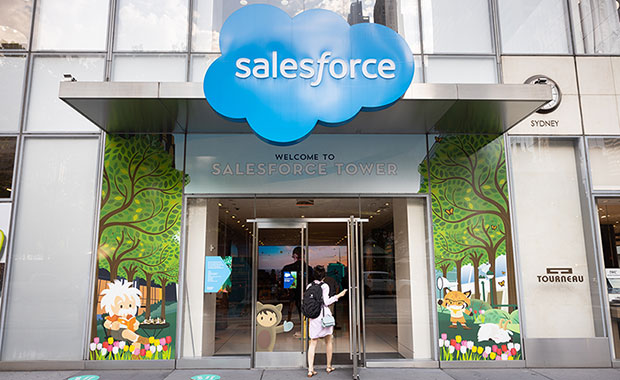 Dreamforce happens this week, emanating from San Francisco and reaching out to the world via the global cloud computing network Salesforce helped to create. With that, this may be the last time to say with all sincerity that Salesforce is a CRM company.

Although the New York Stock Exchange ticker symbol will still read CRM when this is done, Salesforce will remain a CRM company only in the same way that Oracle can be considered a database company, or Microsoft a PC operating system developer, or Amazon an online book seller.

Truth be told, the transition has been ongoing, and the call could have been made at any time in the last few years, so now is as good a time as any to make it. What to call Salesforce is a problem, and it is the same problem that any of the others mentioned have. Their successes have bred further success until they now encroach on each other’s territories. That’s just the way success works.

Maybe none of the others sell books like Amazon but they all have commerce solutions that rival what Amazon built. Oracle, Amazon, and Microsoft all have operating systems, programming languages, databases, and more to the point that distinctions blur in the mind of the buyer.

If a business IT buyer defines a problem as fundamentally data oriented, Oracle or Amazon might have a leg up. If the buyer defines it as a foundational technology problem, Microsoft might get the nod. So, what does this say about Salesforce? Probably only that they won’t likely launch an America’s Cup challenge like Oracle, or a moon shot like Amazon is signaling.

Heavy Lifting ‘As a Service’

More than 20 years ago, Salesforce decided to commoditize all the information technology foundation layers by delivering its solutions as a service, thus hiding from the consumer the choices and complexities of enterprise computing.

In doing this, and in contrast to Amazon, Oracle and Microsoft, Salesforce set its sights on greater levels of sophistication that address the more complex information needs of our civilization. In contrast, you must ask what other information technology needs get glossed over when a company decides instead to go into space.

Salesforce, in previous Dreamforce meetings, showed us that the data we collect can be massaged into new information about customers, and that knowledge was quickly adopted by the rest of the world. It’s the answer to why don’t we solve the problems here on earth, though I do not wish to be critical of others’ choices.

The same can be said about integration among all applications supporting an organization’s mission. Ditto, social media, and its impact on how we get work done. You might rightly quibble about what a Pandora’s box social media turned into, but Salesforce did at least show us how to manage it.

So, what’s in store for this year’s Dreamforce?

First, on the nuts and bolts, Dreamforce might be more consumable because it is more of a visual production instead of a live one. It’s been rehearsed and recorded reducing many of the lags and delays that can make a 30-minute talk much longer.

Next there are the clouds.

I no longer know how many there are, and it shouldn’t mean anything because the integration cloud aka MuleSoft makes everything function as one — and because many clouds team up in various novel configurations.

Commerce Cloud is a good example. It can be very effective in a traditional CRM setting but it can also be put to good use in semi-custom industry applications and even some philanthropic ones.

There will be improvements and enhancements for every cloud and, for once, the video presentation of each will be a more cogent presentation rather than the video replay of a slide show. The differences might be slight on first view, but they’ll matter.

Lastly, there are the new announcements. They’re saving off briefing me until the last minute, so I have a certain amount of freedom to speculate, and my speculation is deep and wide. Deep refers to adding to existing apps and clouds so I’m thinking that marketing has been getting a lot of attention from Salesforce and others lately and it could get more. That makes a certain amount of sense too.

CRM has always been about optimizing selling, but that approach eventually gets you to a point of diminishing returns and you need to focus not on closing deals but on developing more leads. So, look for marketing, especially marketing in the age of the crumbling cookie, to have important things to say.

Widening the footprint seems a sure bet as well — though not necessarily deploying new clouds. At this stage in the life of many of the markets Salesforce CRM serves, things that are tangential to a deal or a cloud take on added importance.

For instance, training should be an important part of the announcements. Trailhead was once Salesforce’s teaching and learning tool, but it has been gradually opened to enable partners to build their own courses to better serve customers. Look for more like that.

That’s just a taste of the firehose of information Salesforce will be serving up this week. I’ll be watching intently and looking forward to giving you my take in the weeks ahead as Salesforce charts its path as a CRM-and-then-some company.