Dreamforce 2012: Revolution Is Out

The CRM industry is used to getting a jolt every year from Dreamforce,Salesforce.com’s annual mega-event. Each year, the number of attendees swells –this year, it’s more than 70,000 — and that makes CEO Marc Benioff’s bacchanal theepicenter of the CRM industry for a week.

That give Salesforce a chance to make a serious splash. Some years, it succeedsspectacularly. In other years, like in 2011, the attempt to change the game seemedstrained — the news didn’t match the bombast.

This year, the company seems to have found the way to align the importance ofthe news with the degree of hype more effectively. Of course, this year’s Dreamforcekeynote was just as full of bombast and spectacle — it kicked off with MC Hammer singing a modified version of two of his hits with Salesforce-centric lyrics — but thepresentation didn’t go overboard in framing what looks like a year not of revolutionbut of integration, rationalization and incremental improvements for Salesforce andits product lines.

Solid but Not Sensational

Last year, one of the big buzztopics around the show was the idea that Salesforce would announce the acquisitionof a marketing automation vendor; this has yet to happen, although it seems there’sa clear spot in the Salesforce application constellation for such technology to reside.

Chatterbox, another technology unveiled on Wednesday, is a tool that syncs files across devices, allows users to read documents and securely share files. This applicationtakes aim at Box.com, Dropbox.com and Microsoft’s Sharepoint — and it can be used forcertain sales and service functions. It’s useful — but not exactly revolutionary.

Then there’s Identity, which combines single sign-on with the ability to import data intoChatter. And Work.com, the result of Salesforce’s acquisition of HR application creatorRypple. A cogent point was made about recruiting becoming more social, whichis true — just ask LinkedIn about that — but again, Salesforce is not first on the scene, nor is it offering a revolutionary story.

The word “social” was used repeatedly — the early part of the keynote felt like a rehashof what most of the industry has realized about social media for the last few years, althoughBenioff backed it up with some useful numbers. But the idea of social media is no longerrevolutionary — and it’s certainly not new news for the folks who’d attend an event likeDreamforce.

The availability of Salesforce Touch may have been the most significant announcement,although its significance may be more evident to developers than to users. It not only allows Salesforce apps to operate on iOS and Android devices, but also provides a platform forForce.com developers to deploy their own applications. It was previewed a year ago, though, so its general availability was not a surprise.

Here’s what Salesforce was great at offering: compelling visions and customer stories.A demonstration of how Virgin Airlines had recreated Chatter to enable its customerservice agents to be nimble and collaborative was compelling, although it omittedanything about the process of customizing the application and, unfortunately, left out thekey ingredient for long-term customer satisfaction — the linkage of the improvisationsagents can make back into the customer record.

Also strong was a case study showing how Commonwealth Bank was using theingredients of the marketing cloud to surface conversations that reveal opportunitiesto create new customers and using Chatter for collaboration. Coca-Cola, Burberry,Activision and GE were also participants in the three-hour keynote.

In all this, however, it was clear that core CRM is fading further into the backgroundfor Salesforce. With the bulk of the keynote devoted to social marketing, single sign-on, Chatter communities, Data.com, Chatterbox and Work.com, core functionality ofthe CRM application at the center was all but overlooked. This suggests that the trend ofSalesforce moving toward a platform play is only becoming stronger. Does that trend — which strongly mirrors Oracle’s past evolution — leave any space for truly revolutionary technology and thinking? We’ll have to wait roughly a year to learn the answer to that. 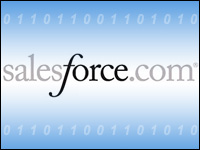 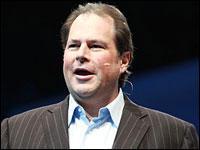 Transmutation in the C Suite