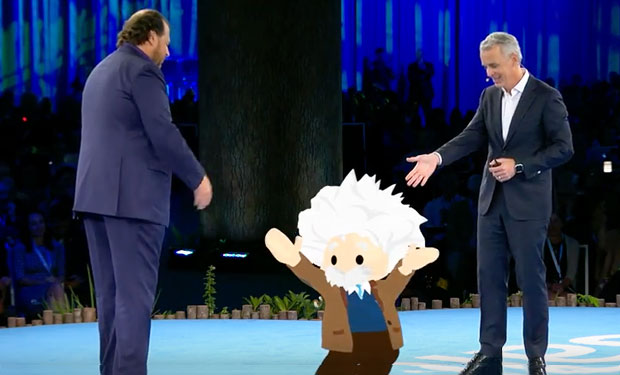 A technology conference staple is the over-the-horizon announcement: a proclamation that something that isn’t quite here yet is the next big thing, often accompanied by simulated screen shots, hypothetical use cases, and demonstrations that veer closer to fantasy than reality.

Even Salesforce has indulged in some of this in the past, and this year’s announcement of a machine learning-enabled technology called “Einstein” easily could be dismissed as futureware. After all, “artificial intelligence” is this year’s hot buzzword (nice to have known you, Internet of Things), and a lot of companies are making announcements that are more descriptive of their aspirations than of actual products.

Don’t become too dismissive just yet, though. The trend toward machine learning is not coming from the imagination of marketing departments, but rather from the confluence of several long-running threads of research.

Combine technology similar to what drives consumer-focused machine learning technologies with large data storage and you have the ingredients for technology that could alter radically how we sell — and buy.

AI by Any Other Name

What will emerge in the next few years may not be artificial intelligence, exactly — there’s been a lot of debate over what AI really is, and the pattern detection algorithmic systems currently in use to understand data and deliver suggested actions are described more accurately as “machine learning.”

Whatever the technology is called, consider the concept of harnessing it for sales as assistive intelligence: It will not displace the sales person, but instead amplify and accelerate the sales person’s ability to understand and employ data — not just to improve productivity and boost performance, but to improve the customer experience.

Amusingly, what people are most fixated on is perhaps least important: the interface.

Voice is the new interface, Marc Benioff said in the Dreamforce keynote, and anyone who depends on Siri or Alexa will seize on that.

Almost 88 million devices with voice-activated functionality will be shipped this year, according to Strategy Analytics. That will rise to 347 million shipping in 2020, at which time some 970 million will be in use around the world.

If the past is any indication, once sales people have used to it in their personal lives, it inevitably will start to play a role in their sales lives. That’s how smartphones, social media and even CRM (in the form of contact management software) became part of the sales landscape.

The real power is not that a computing system can recognize voice commands. It’s what that system can do with those commands — its ability to draw valuable responses from the data sets it’s connected to, and how it prioritizes potential responses.

Salesforce presented an example of Einstein surfacing a high-scoring prospect and alerting a sales person about it.

In a truly powerful solution, the assistive technology also will provide a history of the prospect’s interactions with the company, including content consumed; content drawn from a sales content solution that best fits the prospect’s interests based on content history; and other information that will make the first contact with that prospect a productive one.

The system also will route that prospect and the alert to the right sales rep in the company, based on the vertical market, deal size, geography and other data that resides in various marking and sales management solutions.

As the interface for the fast transmission of some types of data changes from a display to the spoken word, it is not hard to imagine what that could mean for a sales person: a spoken-word guided selling system in CPQ; the ability to interact with sales management systems while in the car; and the rapid generation of new types of reports based on criteria a manager delivers by voice to the assistant, which then makes them viewable on a screen.

The next level would be the assistant as a partner: suggesting sales tactics, prompting the sales person about content the prospect should receive, or prioritizing sales calls. All of this can be enabled through machine learning, which automatically discovers patterns associated with outcomes.

The next stage would be altering patterns based on context. When the framework the data exists in shifts — new competitive products, customer behaviors, economic conditions, etc. — the patterns must shift as well.

Applying machine learning to one set of data relating to the sales and marketing process will be neat, but it will have a limited impact at best.

It will be the equivalent of every sales person having an assistant to help make decisions — to provide access to content, as well as upselling and cross-selling suggestions, virtually instantaneously.

All About the Data

The arrival of this assistive technology could create a dramatic imbalance for the companies that implement it first, dramatically tipping the competitive scales in their favor. We may well see a new sales technology arms race as machine learning is combined with sales data.

However, it would be unwise to start with the assistance system (the sales equivalent of Echo, Cortana or Siri). If you’ve worked with sales technology for any amount of time, you know that a sound solution must start with the data. Assistive intelligence depends on having data in good condition, with the most recent and accurate data given priority, and in a format that makes it compatible with whatever machine learning-enabled system you wish to use.

Having your data accessible in an assortment of disconnected repositories will deprive your assistive intelligence solution of the ability to make the best decisions — and it will cause real adoption problems by making it harder to close deals rather than easier.

So, before the arms race starts, make sure your ammunition — in the form of data — is prepared for the battle your sales teams face in the future.