Amazon, LLBean Tie at the Top for Customer Satisfaction

Retailers performed well this holiday season in terms of customer satisfaction across multiple channels, according to the ForeSee Experience Index: 2013 U.S. Retail Edition, which was released this week.

The report focuses on customer satisfaction at the company level and queried consumers about every applicable sales channel, ranging from the brick-and-mortar store to the contact center to the Web and to mobile.

One intriguing finding is that customers reported strong levels of satisfaction with retailers, even as customer loyalty is on the decline. In short, customers’ actual experience trumped past performance of the retailer or perceptions they had of the retailer.

Taken as a whole, the survey suggests today’s customers want more than low prices from their retailers — although they certainly want those as well, Larry Freed, president and CEO of ForeSee, told CRM Buyer.

“In this ultracompetitive environment, we sometimes think everything is about price,” Freed explained. “But retailers will get a much bigger payment on their investments if they improve their own functionality and customer service and couple that with strategic pricing and in-demand merchandise,” he said.

A Tale of Two Retailers

The top-line finding of the report was that at the company level, Amazon and L.L.Bean tied for the highest spot with identical scores of 90.

“I found it remarkable that two so very different companies in terms of heritage and background and channel strategy both received top company-level scores,” Freed said. “To me, that sends a message to the retail industry — any retailer with the right strategy and execution can deliver excellent customer service and be incredibly successful.”

To be sure, such a company would have to be ferociously devoted to customer excellence, for that is the common denominator between Amazon and L.L.Bean, said Rob Enderle, principal of the Enderle Group.

“They both have made a point on focusing on post-sale customer service,” Enderle explained.

Such a retailer should also have a strong multi-channel strategy for its customers. Generally speaking, these retailers are most likely to have the most satisfied customers, according to the survey, which found that 57 percent of customers were single-channel users with a satisfaction score of 82. The remaining 43 percent, who used two or more channels to engage with the company, recorded a satisfaction score of 85.

Not all retailers are up to the challenge, though, Freed noted, especially smaller retailers that serve a mid-market client base.

“We found that retailers do a very a good job of meeting customers’ needs at the high end, but retailers in the mid-market are facing the strongest challenges. They are having trouble keeping up with the larger players.”

That success is automatically conveyed to larger retailers. As the survey pointed out, even brand-name stores or e-commerce sites fell down in some or many of the channels studied.

Big clearly dominated when tech investment was important, though. For mobile satisfaction, Walmart, with a score of 80, was the only company to experience a significant increase of more than 3 points; it posted a 5-point improvement over 2012’s score.

It was Amazon, however, that led with a mobile satisfaction score of 87. 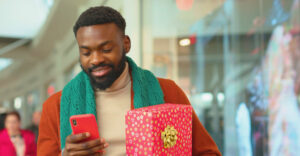