A typical physician’s office features several common elements: a reception area, a stack of outdated magazines, and shelves of slim file folders holding hundreds of paper medical records. The U.S. government is hoping to change one of those elements with a major initiative designed to convert all patient medical records created by both doctors and hospitals into electronic form.

Estimates of the size of the market for EHRs vary widely, depending on what is included in the electronic records process, which ultimately could embrace an extensive range of patient-related data. Healthcare providers currently spend just over US$13 billion a year on EHRs, according to Kalorama Information. Using much narrower criteria, BCC Research figures 2009 spending on EHRs was almost $1.4 billion and growing. Neither estimate included the effect of the recently launched federal program to provide between $30 billion and $40 billion in financial assistance to doctors and hospitals for investments in EHRs through 2016.

The federal funding was authorized by the American Recovery and Reinvestment Act of 2009 (ARRA), the umbrella legislation designed to stimulate the U.S. economy.

The federal program will be transformative in developing the EHR market. Through 2015, doctors and hospitals can obtain federal assistance for investments in electronic records — as much as $44,000 for each physician and just over $6 million — on average — per hospital, according to BCC Research. But by 2016, healthcare providers who have failed to meet federal electronic health records goals will be penalized through reductions in Medicare or Medicaid reimbursements. There is little doubt this carrot-and-stick approach will have a major impact in boosting EHR implementation.

“If the question is whether the ARRA subsidies will induce buyers who otherwise would not have purchased an EHR program to do so, the answer is undeniably yes,” Andrew McWilliams, an analyst at BCC Research, told CRM Buyer.

For both IT vendors and healthcare providers, the federal program will also present challenges. To qualify for federal assistance, healthcare providers will have to meet certain requirements for the deployment of EHRs in a prudent and significant way, known as the “meaningful use” or MU standard. Also, federal criteria will be used to certify the adequacy of IT products offered by vendors.

In addition, the federal program is encouraging the development of health information exchange (HIE) systems, designed to create local, regional and even national networks so that medical records can be exchanged among healthcare providers all over the country, and EHR programs will need to be capable of operating within HIE structures.

The high demand for IT products and services, as well as the federal requirements for acceptable EHR programs, will likely set off a scramble for market share within a vendor community that is broadly based, unsettled, and still experiencing growing pains. Several recent market studies included profiles of between 20 and 30 vendors in each report, although researchers at Kalorama and Gartner concede that small local vendors providing EHR support could number more than 100.

“We found the market to be a mile wide but an inch deep,” Jason Hess, general manager, clinical research, at KLAS Research, told CRM Buyer, referring to the lack of vendors with the kind of comprehensive capabilities that will be required. “Only a relatively small number of vendors have risen to the challenge enough times to claim a proven, repeatable model,” Hess noted in a KLAS report on vendors serving the market.

“Typical of nascent markets, the HIE vendor situation is volatile, with new entrants and market consolidation. Mergers and acquisitions have been the dominant vendor strategy to build out the HIE portfolio,” said Lynne Dunbrack, program director, IDC health insights, in a study of the HIE/EHR market. Most vendors profiled by IDC were small to medium-sized, privately held companies that could be prime acquisition targets, and only a few had a large customer base.

The attraction of a market in the billions of dollars won’t necessarily work for all vendors. The federal requirements could severely limit opportunities for many.

“It’s a market that increases the cost of entry. Some vendors have the capability to meet the federal EHR requirements, or the ability to improve their product offerings with modest investments. But for others, especially those entering for the first time, it will be really difficult,” Wes Rishel, a vice president at Gartner, and a co-author of the firm’s medical records market study, told CRM Buyer.

“Another other big issue for vendors is having the resources for developing marketing channels to reach a lot of small practice physicians,” Rishel noted.

In light of the fluid federal funding and regulatory situation, all vendors will have to be on their toes as product certification standards and market requirements evolve. Several vendors have offered guarantees that their products will comply with the “meaningful use” standards, which are still being drafted by the U. S. Department of Health and Human Services (HHS), which oversees Medicare and Medicaid.

Some vendors have been trying to anticipate the federal requirements, which have been evolving through various HHS outreach channels to vendors and healthcare providers.

“We have been developing our products in line with the ‘meaningful use’ guidelines since they were first proposed in 2009. We constantly build to the highest standard, so if the final requirements are lower than expected, we will simply be ahead of the game,” Charlie Jarvis, vice president of IT provider NextGen Healthcare Information Systems, told CRM Buyer.

Compliance with the standards is likely to be just as important as the federal funding incentives or the Medicare and Medicaid reimbursement penalties to IT vendors seeking to crack the market.

“High-publicity incentives can capture attention, but offerings will shape the market. It is still up to vendors. Creative vendor offers will win the day,” Bruce Carlson, publisher of Kalorama Information, told CRM Buyer.

Vendors offering products that comply with federal requirements may also need to offer “aggressive financing” to physicians, he added. Some doctors, as a result of the recession, higher overhead costs, and lower insurance reimbursements, may still need financing assistance in addition to the federal incentives.

While the federal initiative is designed to be “vendor neutral,” the program is likely to have a technology forcing element. Both vendor and healthcare provider groups have asked HHS to take a more gradual approach in setting deadlines for compliance with proposed regulations. However, even if HHS honors those requests, the federal program is likely to have a significant impact on IT product development.

“This initiative has been a challenge for vendors and end-users alike,” IDC’s Dunbrack told CRM Buyer. “Vendors developing flexible, service-oriented architecture (SOA) products will be better positioned to adapt to evolving requirements and standards,” she added.

Because different vendors may specialize in different medical records functions, vendors will need to offer products that can be integrated into a complete system, as healthcare providers mix and match their product purchases, Rishel added. 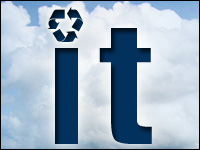 Who’s the Boss in Cloud Land?