SugarCRM has just debuted a controlled release of version 6.5 of its flagship open source CRM offering. In many ways, the release is an iterative change — it does not represent the same major shift in functionality and user interface as version 6 did, when it was launched in 2010.

In one key way, however, the new version is significantly different: The user interface is much more oriented to search technology, explained Clint Oram, chief technology officer.

“If there is anything Google has taught us, it is that search is an essential paradigm,” he told CRM Buyer.

The updated app improved its navigation and added full-text search, said Oram. “Search is now the primary entry point into the application.” 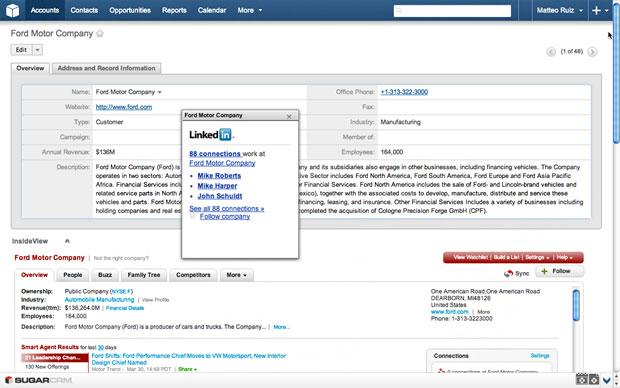 These integrations are almost as important to SugarCRM as the application itself, Oram said.

“We truly believe that software companies that embrace partner ecosystems are the ones that will succeed in the long run,” he said.

There is a new calendar feature with a drag-and-drop UI, which among other things, offers support for recurring meetings. The calendar comes with integration to the iCal standard.

Version 6.5 comes with tighter links to such applications as LinkedIn and Microsoft Outlook. In the case of the former, it offers a new import feature for LinkedIn contacts. As for the latter, it provides enhanced Outlook integration. There is also integration with IBM Connections and IBM SmartCloud for Social Business.

These incremental updates add up to a lot of enthusiasm for the product among SugarCRM’s user base, Jeffrey M. Kaplan, managing director of THINKstrategies, told CRM Buyer.

“The new release not only enhances features but improves the performance, which is essential for pleasing customers,” he said.

Not many end-users look under the hood to see why an application is performing — or not — as well as it does, he continued. In version 6.5, the refined architecture and extended functionality of the platform “has noticeably improved the quality and responsiveness of both the application’s on-premises and on-demand versions.”

Some of the changes are minute enough that they might not register with all of the users, Oram said — but they still add up to an easier experience.

“For instance, we consolidated the two navigation bars into one navigation bar,” he pointed out. “We also greatly simplified the layout of where the information can be found on the screen.”

What users will notice, Oram promised, is the orientation of the user interface on search.

The product integrations that are rolling out with the release of 6.5 are separate applications — that is, they are not embedded in SugarCRM’s core release. However, they are designed to be plug-and-play products with the flagship app, Oram said.

Many are focused on even more expansive search than in the core app, as well as voice and telephony integration, he noted.

To bring its partner community closer into the corporate fold, SugarCRM has announced a few partner initiatives along with these releases and the debut of 6.5. It has formed a 12-member partner advisory board, which will provide feedback from the partner community to SugarCRM.

It is also launching a formal certification program for its channel partners, featuring a role-based training curriculum, which channel partners are required to take. The courses will focus on the functions their employees perform: sales executive, pre-sales engineer, support consultant, service consultant and developer. The partner companies must certify at least one person for each of these roles.