SAS is beefing up its SAS Social Media Analytics application with new features that give users a better handle on their social media effectiveness: improved tracking of past versus present performance, and benchmarks to assess competitors’ performance.

“A lot of this functionality seems as though it would be routine, but few companies on the market actually offer it,” John Bastone, global product marketing manager for SAS Customer Intelligence, told CRM Buyer.

Essentially, it provides a snapshot of how a company did on, say, Facebook at a particular time.

“We find when we ask clients how many Facebook fans they have at the moment, they can answer,” Bastone said, “but they cannot answer how many they had in, say, June or this time last year.”

If a company can answer those questions, he continued, it is usually because there is a social media intern or employee manually logging in the data every day.

“That is what our application does now – it programmatically snaps every KPI (key performance indicator) that a firm may want for social media outreach,” he said.

With this information in hand, a company has the necessary foundation to develop longer-term strategies.

“You can start to do things like correlate campaigns or certain actions, cross-reference them, and so on, to understand what is most effective,” said Bastone.

The author hub is another new module. It provides insight into online authors — or people who post comments, in other words. The point is to give customer care departments information about who their biggest fans are and, conversely, who hates them the most.

It is another capability that is not easy to build in social applications, Bastone said.

“Consider how many people are generating tweets. The notion of compiling people who tweet about your brand in an A to Z directory has been difficult to develop,” he noted.

However, this feature does that, Bastone continued, and also lets users rank the authors in terms of how influential they are, on what topic they tend to post, and so on.

In short, “it helps a company see who has the most influence on its brands,” he said.

The upgrade app also has new competitive intelligence functionality that compares what people are saying about your company in social media to what they’re saying about a competitor. It serves as a microscope to examine how your brand and its competitors are perceived, Bastone said.

It can compare many different functions, such as public relations or research and development, he said. It can also delve into industry-specific issues, such as style and handling in the automotive sector.

The application has added industry-specific sentiment engines in several industries, in fact, including retail, telecommunications, hospitality, gaming, banking and automotive. 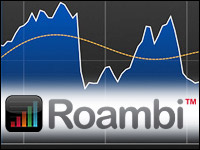 Roambi for SAS Ratchets Up the Integration Factor