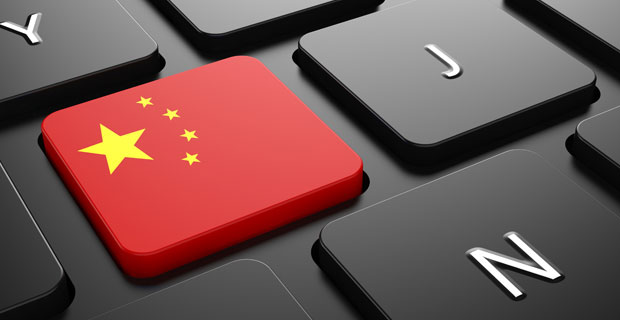 It was bound to happen. Salesforce was going to China at some point, and it announced that action this week saying it was partnering with Alibaba.

There are so many ways to read this, but I don’t have the filters to resist comparing the announcement to what Robin Williams once said about cocaine: “Cocaine is God’s way of telling you you are making too much money.”

Only slightly modified, I’d say setting up in China is God’s way of telling you that you’ve been too successful.

Where to start? There are two scenarios, God’s and a happier one. Let’s flesh them out.

China is potentially the biggest market in the world (depending on what you’re selling) and although their more than 1.4 billion people are climbing the economic ladder rapidly, China is still a mercantile, manufacturing-for-export and agricultural economy.

Forget for a moment China’s current challenges — like a bulging population and energy, water and environmental needs. It has about four times the population of the U.S. and more than double the U.S. and EU together. China — especially when combined with Hong Kong, Macau and Taiwan — represents a pool of opportunity that most Western businesses rarely have experienced, and that Salesforce needs to continue its growth.

However, China’s well-known business practices of ripping off technology companies through technology transfer demands and joint partnerships makes this deal look less like an opportunity and much more like an organized theft of American tech expertise. (Gee, Denis, why don’t you tell us what you really think?)

I shudder to think of Salesforce setting up a few datacenters around the country, and I wonder what will become of Salesforce’s “Ohana,” the Hawaiian word it uses for family — which represents how Salesforce treats its employees and customers — in a totalitarian state where all memory of Tiananmen Square has been suppressed.

The company’s record of changing minds about repressive activities has delivered mixed results. For instance, CEO Marc Benioff stood up for LGBT rights in Indiana when Mike Pence was governor, moving some Salesforce activities out of state, but the company still maintains a major development office there. Last time I looked, Indiana still wasn’t officially a showcase for diversity and tolerance.

So it concerns me technologically, economically and culturally that Salesforce would put its head in the proverbial dragon’s mouth.

Is There a Better Plan?

Times are changing. The trade war spun up in Washington that challenges Chinese practices like dumping steel and unfair partnership agreements and technology transfers has yet to show results.

Some analysts suggest that China simply plans to wait out the current administration in Washington, accepting that it will lose a bit in the short term. However, we already see China resetting by seeking alternatives for U.S. soybeans, for instance.

Its Belt and Road Initiative (BRI) spanning 152 countries to develop trade routes touching 65 percent of the world’s population and 40 percent of its GDP (as of 2017) is something to seriously challenge anyone’s expansion plans.

Trade wars are not simple and they don’t resolve quickly, contrary to the wisdom of the moment. Still, it has taken Salesforce 20 years to get to this point — and although another entity could recapitulate that march in less time, it would require determined effort and resources.

Perhaps the trade war and other issues bubbling up will have an effect on China and make the Salesforce mission there less of a risk. Yet I’d prefer to see some deeds performed with other companies before investing my own in such a venture.

The BRI refers to overland transportation (belt) and maritime shipping (road). FYI, in ancient times maritime shipping used what were described as “blue roads,” which were far simpler to make than the land versions.

There is another road not accounted for in BRI and maybe not thought about yet; certainly it is not thought about enough. It’s the information road and the looming consolidation of IT into a global utility. It’s going on right now before our eyes, and if anything can be considered a next Industrial Revolution it will be how we leverage the information utility in the global market.

By placing itself in a relationship with China, Salesforce is positioning itself as a player in the IT Road competition. Others, like Oracle and Microsoft — with contributions from IBM and others, including Alibaba — will form the backbone of the global IT utility.

From a belt and road perspective, it’s better to be in the tent than outside of it, but that doesn’t give China a free hand in IT. Although the country has high expectations for taking a leading position in the tech markets in the decade ahead, these markets bear only a superficial resemblance to China’s mercantile experience.

Modern markets for information or anything else depend on transparency, rule of law, access to capital and great transportation. China is making strides in some of these, but it will need to up its game to succeed.

Salesforce is in many ways an ideal partner for helping China accomplish this — but despite all the upside what I see most is the downside, and I wish Salesforce was staying home.