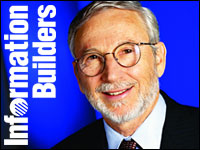 Business Intelligence has evolved considerably in the last several years. At one time the domain of PhDs or other highly trained employees, it has become accessible to the masses.

Indeed, one of the competitive differentiators among the vendors in the market — from the huge stack players to the small best-of-breed providers — is not whether, but how, they make this complex technology available to business line users.

Information Builders’ approach? It focuses on what it calls “production BI” — building a system for a company that can then funnel the necessary information to the end-user in point-and-click format. It’s a model that has served the company well so far, CEO Gerry Cohen told CRM Buyer.

CRM Buyer: How is Information Builders weathering the economic downturn?

We’re battening down the hatches, like everybody else — weathering, by running with the storm. Q4 was terrible. Q1 was not much better. We think we are at the bottom now. Q4 was a very steep slide, but Q1 didn’t slide more. So we think this is the point where it is starting to loosen up.

CRM Buyer: What are some of the cost-cutting measures you’ve taken?

For one, we’ve shifted all of our education and training to be Internet-based. This is a big cost savings for us, since we do a lot of education and training. Our people in the field need to be kept up to date. So this has saved us a ton of dough. We have also [put in place] some travel restrictions. We are cutting back on travel and trade shows, for example.

CRM Buyer: How can your products help your customers’ bottom lines in the near term?

We are in the business of helping people use the information they have so they make better decisions. What we are seeing now is that a lot of customers are actually doing more with our products. We also have a consulting business, and a lot of our business is with existing accounts — helping them build out their systems more.

CRM Buyer: What are some of the bright spots for your company right now?

There are certain industries we are doing very well in. Our hospital track is doing well, for example; so is the federal government business. It makes sense from an economic perspective — those two sectors are not as restricted as some of the others.

CRM Buyer: How will your company look a year from now?

Q2 is easing up, and we are making the assumption that for the rest of the year, it will be a little better. Next year, we think, will be a boom year for us. A lot of companies right now are not making investments in technology, but sooner or later they will be forced to.

CRM Buyer: Business intelligence software is a small tech niche dominated by a few large players. How do you compete with these companies?

It’s true that we are an independent BI vendor, and our competitors are stack vendors such as SAP, which acquired Business Objects, and IBM, which acquired Cognos. Oracle, of course, now has Hyperion. But there are still a number of smaller, independent best-of-breed vendors in the market, and we consider our specialty to be in BI production.

CRM Buyer: What do you mean by “BI production”?

It means we will help a company build an information or BI system that can then distribute information to users who don’t need any training to use the system. BI used to be considered a tool; people would get reports, but first they needed to know how to use the tool. What we give them is point-and-click functionality. We build BI for thousands of people.

CRM Buyer: Can you give me a few examples of how your systems are being used?

Sure. For instance, someone in a company might use us to see how the corporate credit cards — which can number in the thousands — are being used. Another use would be by an automotive dealership that measures warranty costs and how it is reimbursed from the auto manufacturer. We, in fact, have something like that for Ford dealerships.

CRM Buyer: What do you think is the next evolution for BI?

BI used to be a historical review — letting people see what has happened. Now, the focus is on what is happening in real-time. Systems can assess what is selling, for example, and what is not, [and] whether a certain promotion is making sense — information that can then allow a company to make a real-time decision. Now, we recently added predictive analytics to the mix to tell people what will happen. So you can see this now — systems using statistical processes to predict what might happen in a certain transaction. My wife, for instance, recently tried to buy concert tickets to the Boston Pops. It was denied. So she called the credit card company and found out it was because we had never used that card to buy classical music — rock music concerts yes, but not classical. That is an example of predictive analytics being used in a transaction, in this case to prevent fraud.