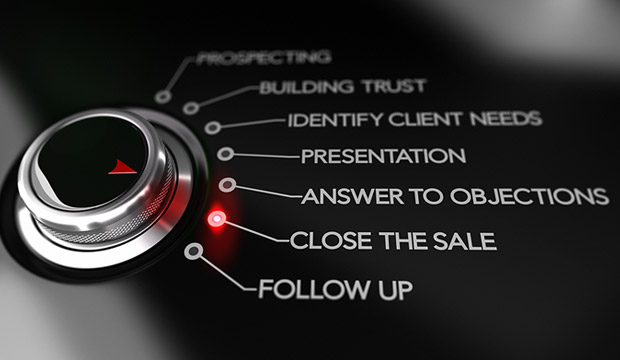 As a system of record, Salesforce, as well as just about every other SFA vendor, has stayed scrupulously neutral in the sales process debate of the last couple of decades. That is now changing, sort of.

A sales process is a set of protocols that an organization uses to conduct selling. One’s process needs not be complex, many organizations settle on processes that have around seven steps. But a sales process that everyone in the organization adheres to is fundamental to that organization’s success. The reasons are not complicated.

For about 20 years Jim Dickie and his partner in research Barry Trailor conducted an annual survey of thousands of sales organizations. Their results were fascinating. They found, for instance, that the best performing sales organizations were the ones that not only had a sales process, but also wrote it down and held their salespeople to it. Process is important, they discovered, and avoiding one led to mediocre results.

Did I mention that a defined sales process helped the best companies to be proactive and to engage as trusted advisors?

Sales process works. For example, most sales processes require a sit down with the ultimate money person, the individual with a budget to spend on your type of product. The reason is simple. The money person is the only one you can trust to tell you that, yes, there is a budget, and it will be spent this year because we need such a product.

Show Me the Money Person

Smart tech companies usually bargain the product demo and proposal process for access to the money person. Way too many deals have gone south because no one checked with the money person and plunged headlong into demonstration and selling.

Often the deals that languish do so because the salesperson was never dealing with a person who could say yes, I’ll buy that. A sales process is put in place (by the savvy companies) to avoid such misuse of precious time and resources that must be dedicated to revenue generation.

Finally, this is not to say that companies with established sales processes close every deal. They certainly don’t. But having an established process gives managers the ability to ask penetrating questions like what’s the customer’s time frame, do they have budget, how do we know this, how did the demo go, and other such tests. Negative answers force a decision to move on to other opportunities rather than further invest in a deal that is at best going sideways.

All of this is has set the stage for more modern selling. For decades, the sales process has been optional in too many organizations. Dickie and Trailor’s data suggested that only a minority of organizations could be classified as top performing.

In the majority of situations, sales reps did what they wanted, used SFA as a system of record, and updated it perhaps weekly or in order to get expenses reimbursed. Sales organizations were too afraid to challenge most of their reps for fear they’d quit and take their data with them.

A few years ago, for instance, I did a project for a $300 million company whose reps kept all their data on their phones. The company wanted to modernize its approach to customers, but there was no central repository of customer and prospect data, and the business didn’t want to have to deal with a walkout by the reps. In that case, a promising SFA/CRM project was scrapped.

Things have changed. A new generation of salespeople, call them digital natives, has arrived — and while they don’t like entering data into their SFA systems as much as their predecessors, they’ve at least made peace with the necessity of SFA.

This generation is also acutely aware that they’re working alone in a competitive world, and they aren’t afraid of asking for help. Into this environment Salesforce has teamed with Slack to supply, if not a defined sales process, at least a defacto one.

Slack is an internal communication tool that can help salespeople to connect not only with their managers and peers but also to the network of people and internal departments that can make a difference in furthering a sale. There are other uses as well. In fact, there are few if any uses for Slack in the front office that have not been attempted with other parts of CRM. Two examples will suffice.

Salesforce has, for a while, championed the idea of swarming in support matters. A swarm is an unofficial or ad hoc group of experts convened to solve a customer problem, especially one that has escalated through normal service channels without resolution.

A swarm does its business, solves the problem, and dissolves back into the company. Chatter was the Salesforce tool initially used for this and it was quite good. But swarming with Slack further reduces internal friction and to a degree obviates the need to declare a swarm, as I understand it.

There’s a similar situation in sales, especially where managers need to balance organizational needs against those of a single deal.

For instance, and here’s where process becomes pronounced: two reps might want to book a sales engineer or SE for a demo on the same day. The natural question a manager might ask is whether the reps have spoken with the money person and confirmed that there is a deal in the works.

Now, just to complicate things, there are good reasons to give a demo even if there has not been a confirmed visit with the money person. Such a reason might be that one of the customers wanting a demo is already a customer seeking an upgrade. In that case the sales manager may feel comfortable extending the courtesy of a demo.

Regardless of how those scenarios work out, having a solution like Slack means salespeople don’t have to wait for an email notification or voicemail exchange — especially if they are working from a remote location and can’t hope to bump into people at the water cooler.

A tool like Slack is also more general purpose. A rep might be able to communicate with a manager through a CPQ system, but that approach primarily focuses on aspects of a deal — like discounts and warrantees — but not “can we demo?” A CPQ notification might also run through email, thus slowing things down.

Also, some such questions might be better dealt with earlier in the sales process rather than when generating a quotation that can carry the weight of a contract.

When I first heard about the Salesforce-Slack deal I was skeptical — and to a degree I still am. So far, the messaging is about events which are parts of processes but there’s no explicit link and without it you can be left thinking about an array of dissociated events. Scale is important.

But if these scenarios provide examples, then it’s likely that other uses will arise that further cement the integration. That’s a good last point. The two products aren’t fully integrated yet, and more business cases are likely to emerge, so watch this space.