Avaya has released its IP Office 8.0 — the latest iteration of its trademark unified communications platform for small and mid-sized businesses. 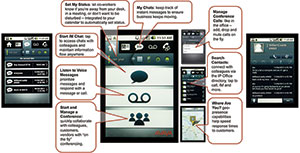 The new application comes with a number of new features, some of which focus on the company’s core competency of communications, collaboration and presence.

However, the big push with this release was in the mobile arena — specifically optimizing for mobile collaboration, said Avaya’s SME executive, Joe Scotto.

“There were a number of enhancements to IP Office 8.0, but mobile collaboration was a key area for us,” he told CRM Buyer.

The mobility application for Avaya IP Office 8.0 is called “one-X Mobile Preferred for IP Office.” It currently provides unified communications capabilities on Android-compatible devices; within several weeks, Avaya will be rolling out similar functionality for iPhones.

The feature set was developed with the mobile worker in mind — someone who increasingly is blending work, home and travel, and needs to be able to access a multitude of applications, Scotto said.

“This change is lifestyle is a big part of why mobility is so critical. People need to be able to, say, conduct conference calls on the road, or follow a meeting even if there is a lot of noise or confusion in the background.”

Major enhancements include the ability to initiate an IM with several co-workers from a smartphone; features to manage multiple participants on a conference call; directory access to colleagues while on the road; and new ways to tap into presence.

For example, when setting up a teleconference among several colleagues, a user can tell what time zones people currently are in and arrange the meeting accordingly.

Another feature — visual voicemail — lets users see all of their business voicemails on their mobile device with date/time information. In addition, users can hear voicemail messages as they are being left, and have the option of interrupting the message to take the call.

Also new to Avaya IP Office 8.0 are the so-caled “serverless” collaboration capabilities delivered through a new Avaya C110 Unified Communications module. It eliminates the need for an external server in IP Office implementations.

There are new desktop IP Office plug-ins for popular business productivity applications, as well. One of them brings Google Talk and IP Office contacts into Avaya one-X Portal for IP Office. Another allows you to make and receive phone calls from a Salesforce.com page.

The Role of CRM in Logistics Companies’ IT Strategies, Part 2

The Trouble With Live Chat