Your New 2nd Car Could Be an E-Bike 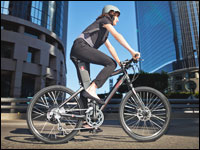 There will be no shortageof two-wheeled vehicles at next week’s Interbike trade show in Las Vegas. The largest bicycle trade show in North America remains very much about pedal power, but in addition to thehigh-end Tour de France-worthy road bikes, go-over-anything mountainbikes, and hipster- and messenger-friendly fixed gear bicycles, there arethose that are juiced up with electric motors and batteries.

It might seem counterintuitive that electric bicycles would be at ashow built around health and fitness, but the idea here is thatbicycles that are still pedal powered while offering a motor assistwould be ideal for commuters. In this regard the electric bicycle isbeing aimed at consumers as an alternative form of transportation — onethat is far more affordable than a car and offers greater flexibilitythan mass transportation.

This is especially true in dense urban areas where auto trafficoften grinds to a halt during rush hour, but bicycles can zoom byin bike lanes.

“For shorter commutes, the bicycle and electric bicycle are already agreat time saver,” said Edward Benjamin, chairman of the LightElectric Vehicle Association. “I remember sitting in a traffic jamsomewhere in the Los Angeles area and watching in envy as cyclists sweptpast us and into a university campus on the bike path next to theroad.”

But could these single person vehicles replaces cars?

“Maybe it would be better to think of electric bikes and scooters assupplementing metros, trains, buses and … cars,” Benjamin added.

If the e-bikes are so good for getting around, the question can beasked why these are only taking off now. The answer comes down to anumber of improvements, with the biggest actually being the batteryand the electrics that allow for the pedal assist to do its job. 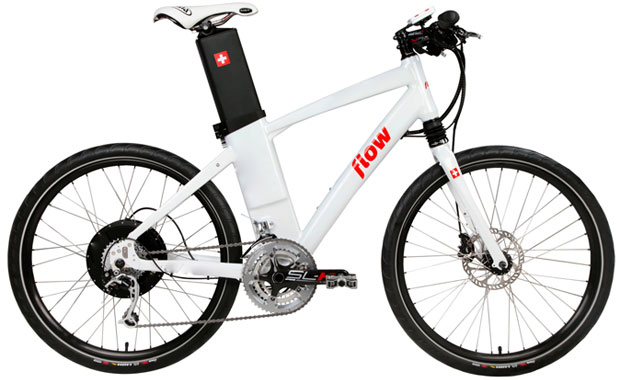 “It is really the integration of the electronics to build a higherperformance oriented product than what was available in the past,”said Larry Pizzi, president of Currie, which makes the eFlow brand ofelectric bicycles. “It has been a gradual and slow progression, sortof like pedaling uphill.”

Exactly how slow this innovation has been in coming is notable in thatelectric bikes have been around almost as long as the bicycle itself.In fact, the motorcycle — the big sibling of the bicycle — came out ofdevelopments to put a motor on a bike.

What wasn’t around back then was the modern rechargeable battery, atrue game changer for those looking to get some help when pedaling.The size of the battery has gotten smaller, making it a far moreviable technology for riders.

“Electric bicycles were invented more than a hundred years ago, butmodern lithium ion battery technology has made them at least 20 poundslighter,” said Beth Black of Pedego Electric Bikes.

“When we started afew years ago, the battery packs still weighed 30 pounds. Today, abattery weighs six pounds and lasts 10 times longer. Recentinvestments in improving battery technology for other applications,such as cars, are helping to develop even better batteries forelectric bikes,” she explained.

Get Your Motor Rolling

Thus the biggest single improvement truly is that development oflithium ion battery technology, which has seen a remarkableimprovement to make e-bikes more viable as a transportation optioncompared to lead acid batteries.

“They are lighter, smaller, and they have a longer life cycle,” Prebustold TechNewsWorld. “Continued improvements in battery tech will makea big impact on e-bikes — less expensive, lighter weight, and longerlife cycles. Hopefully, demand for improvements for battery tech fromthe car industry will trickle down to e-bikes and make a bigimprovement.”

While this is beginning to have its own trickle-down effect on theAmerican market, much of the innovation is actually coming out ofChina and Europe — two locations that have long seen the bicycle’spotential as a commuter and transportation alternative to theautomobile.

“The industry has also grown, and overall e-bikes are becoming morereliable with higher-quality components,” added Prebus. “China andEurope have driven the demand for economical light electric vehicles –including e-bikes — because of their congested cities and the highexpense of owning and operating a car.”

One issue that remains dominant when considering electric bicycles is that they still require power, and whether this in turnmakes them “less green” than a conventional bicycle.Detractors suggest that if power is used, then mass transportationmight be the better option.

But those supporting the growth of e-bikes see that there are green ways to juice up a bike, while the power used is still far less thanthat of a car or motorcycle.

“E-bikes use a very small amount of energy compared to many othere-vehicles,” Prebus added. “A conventional bicycle is one of the mostefficient forms of transportation, and adding electric assist that ispowered by solar power is a real possibility today. Using solar powerto charge an e-bike is something that a lot of people could do today.”

Even the end of life is considered in the industry — notably ofthose lithium ion batteries.

The other part of the equation with electric bicycles is that mostroads today are still designed for those riding in vehicles with fourwheels. As e-bikes aren’t capable of the speed required to use manyhighways or urban freeways, this puts riders on surface streets, whichcan still be somewhat hazardous.

However, cycling initiatives in the United States, including thosefrom various advocacy groups, are helping make bike lanes and bikepaths a reality. And this further is spurring the growth anddevelopment of the electric bicycle. Many urban centers, including NewYork, Chicago and even car-friendly Los Angeles, are becoming just asbicycle-friendly as cities such as Minneapolis and Portland.

The industry is also getting into the spin of things, and with highgasoline prices likely to be the new normal, the e-biketruly could become the second car.

“It is on the cusp of becoming a mainstream product,” said Pizzi.”This has changed dramatically in the last three years, and now everymajor bicycle brand is starting to look at offering an electric bike.”

Peter Suciu is a freelance writer who has covered consumer electronics, technology, electronic entertainment and fitness-related trends for more than a decade. His work has appeared in more than three dozen publications, and he is the co-author of Careers in the Computer Game Industry (Career in the New Economy series), a career guide aimed at high school students from RosenPublishing.