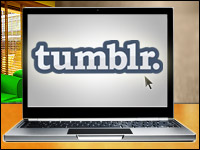 Yahoo confirmed on Monday that it was acquiring Tumblr for US$1.1 billion — perhaps further propelling the flight of Tumblr bloggers that began when rumors of the sale intensified last week.

While the deal has implications on many levels and for many players — starting with Yahoo and its shareholders and including the youth segment Yahoo intends to target — at least one group appears to have weighed the transaction and come to a conclusion about its merits.

Tumblr bloggers have been leaving in droves to join WordPress, according to a post by WordPress founder Matt Mullenweg.

However, Mullenweg later tempered his assessment in an update to the post.

“Some people are reading too much into the import numbers,” he said. “I don’t think there will be an exodus from Tumblr.”

Having committed to a $1.1 billion cash purchase, Yahoo might justifiably be unnerved by any sign of cracks in Tumblr’s foundation, especially given its barely there revenue. One reason Yahoo wanted the site was that it would be key to the company’s recently stated goal of revitalizing its brand among younger users. For that reason, the site will remain independent.

Any significant loss of bloggers from Tumblr would not bode well for Yahoo’s strategic positioning or its bottom line.

However, it’s more than likely that the so-called “exodus” was actually just a knee-jerk reaction by a relative few bloggers, said Rich Hanley, associate professor of journalism at Quinnipiac University.

“It is now a cliche for users of an application or site to defect once it has been acquired by a larger company,” he told TechNewsWorld. “It is the techno equivalent of threatening to move to Canada if a party one opposes wins the White House.”

Every time Facebook shifts policies or user functionality, the chorus kicks in to denounce the move, he said. The bottom line is that even Internet users — people purportedly embracing the cutting edge of technology — don’t like change much.

Why Tumblr Is Unique

Yahoo’s acquisition of Tumblr will not likely result in a significant change, though, precisely because its uniqueness was the draw, said Teresa Caro, SVP of social and content marketing at Engauge.

What makes Tumblr unique is that it is both a social content management system like WordPress and a community platform with an engaged audience of people looking to follow great visuals and curated content, she told TechNewsWorld.

“What I’m hoping is that Yahoo, through Marissa Mayer, can help Tumblr monetize its offering in a way that does not alienate its audience,” Caro said.

“Also, Yahoo has its own audience to help drive visibility to the different Tumblr experiences,” she continued — thus Yahoo has the potential to be great for brands on Tumblr.

Still, this argument is unlikely to resonate with some of the more ardent users of the site, said Marcus Messner, assistant professor of journalism at Virginia Commonwealth University.

“Tumblr is a hip social media site that has attracted a large young audience — in some age segments even rivaling Facebook,” he told TechNewsWorld. “Naturally, a takeover of their favorite site by one of the Internet dinosaurs does not sit well.”

Yahoo’s business accumen could be a big asset to Tumblr CEO David Karp and his team, Messner said, “but that is, of course, a rational business argument that is not necessarily important to the playful and creative Tumblr crowd that wants an authentic platform more than anything else.”