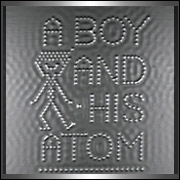 IBM has released the world’s smallest movie. Company researchers moved thousands of atoms to create a miniature stop-motion movie titled A Boy and His Atom. 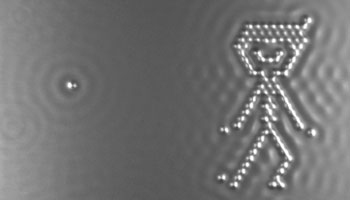 A Scene From A Boy and His Atom by IBM Research

The movie, which has 242 frames, was made with a scanning tunneling microscope (STM) which IBM Research has been using to conduct research into data storage. The movie has been certified as the world’s smallest by the Guinness World Records, according to IBM.

“What a great movie!” said Michael F. Crommie, a professor of physics at the University of California at Berkeley.

The film shows that it’s possible to manipulate single atoms and molecules with the tip of an STM, and IBM scientists had to develop “new low temperature, ultra-stable scanning tunneling microscopic techniques” over many years,” Crommie told TechNewsWorld.

“It is now possible to create tiny atomic and molecular structures that were never possible to access before,” he said. “We can now study the electronic, magnetic, mechanical and optical of these nanoscale structures.”

IBM did not respond to our request for further details.

The movie depicts a stick figure playing with an atom. They dance together, the figure “bounces” the atom off a “wall,” then plays other games with the atom, which eventually mutates into the word “Think” — a word prominent in IBM’s corporate offices — and finally into the letters IBM. It’s set to an electronic music soundtrack.

The STM magnifies the surface of atoms more than 100 million times. IBM researchers used the STM to control a needle that has a tip 500 nanometers (NM) long and only a few NM wide. The needle, attached to a cantilever, scans the surface of materials with an accuracy of 1 NM.

The needle is remotely operated from a PC. It physically attracts atoms and molecules on a surface and can be used to pull these to a precisely specified location. The scientists took still shots of the individually arranged atoms.

The STM is suited for taking these snapshots. In 2010, it was used to take 100,000 snapshots of an atom within less than one second.

Also in 2010, IBM scientists in Switzerland used the STM to create a 3D replica of the planet that measured 22 x 11 micrometers.

There’s more to the IBM mini movie than meets the eye. It is an actualization of quantum mechanics.

The properties of nanoscale structures are dominated by quantum mechanics, and the waves that surround everything in the movie “are not an artifact of the measurement but are, in fact, quantum mechanical probability waves arising from electrons bouncing off the boy and the atom,” Crommie said.

“We expect that one day these ultra-microscopic structures will be incorporated into commercially available technology, but that day cannot come until we understand the basic behavior of these structures,” Crommie said. That incorporation “would potentially enable faster, more energy-efficient computers and communications, profound new energy harvesting schemes, and extraordinary new sensors and environmental monitors, among other things.”

Other Avenues for STMs

IBM “is demonstrating the technology is viable for practical projects,” Robert Enderle, principal analyst at the Enderle Group told TechNewsWorld. However, actual products resulting from this research are still several years away.

The scanning tunneling microscope can be used in other areas, such as research into medicine and in the creation of unique elements and materials, Enderle added. “IBM has other projects focused in areas like this in a variety of labs.”