This month begins the march to 2012 technology with the Consumer Electronics Show just around the corner. Vendors have already started prebriefings for what will likely be a cascade of announcements all happening in the same one-week time frame.

This will be the last year that Microsoft keynotes or has a major presence at this show. Like Apple, Microsoft is moving to an event-driven, rather than show-driven, schedule. The reason is showcased by the fact that Microsoft will be announcing Windows 8 about a month before it is really ready to be announced. This makes me wonder if we are having a Comdex moment and this could be the beginning of the end for CES and other massive shows of its type.

After exploring that issue, I’ll close with my product of the week: a cool new superphone from Samsung.

CES will be the coming-out party for Windows 8, but the problem is that Microsoft isn’t expected to begin the Beta process until more than a month later, making this show ill-timed for the announcement. Much like Apple did with MacWorld, Microsoft is calling this the last CES it will have a major part in, making this an historic event for the company.

Windows 8 heralds a new class of computer called either “hybrid” or “crossover,” depending on your predilection for automotive terms. This class was pioneered by the Asus Transformer, a tablet/laptop combination product designed to address the desire of many early iPad users to have the capabilities of an iPad and MacBook Air without having to carry both products at once. The iPad was often left at home.

This new combination product promises to address this problem, but it will need to work through some interesting choices as it will come in both ARM and X86 platforms, and size is in flux. The size problem isn’t trivial, because folks don’t seem to like tablets over 11 inches or Laptops less than 12 inches, making a compromise on size difficult. Still, this is the form factor that will best highlight Windows 8 capabilities, and it is likely it will be the most interesting of the 2012 PC designs. I expect you’ll see some early designs at CES as a result.

One of the things that may make this new device class workable is the coming wave of USB portable monitors. I’ve been using one from Lenovo for much of this last month, and coupled with an Ultrabook — doubling the available screen real estate — it is well worth the typical sub-US$200 price.

It fully powers off the USB port and weighs in 2.4 lbs. with cover (1.8 without). I’ve generally been annoyed at working on the road because I use two 27-inch monitors in the office, and dropping down to a single sub-14-inch monitor is a huge pain. I think the option of doubling that on the road is well worth the $185 this monitor costs, and that this class of product could make the small screen on a hybrid/crossover-class product usable.

Granted, you’d fall back to using a mouse or touchpad for stuff on the USB monitor, but it would allow you to work off reference material, play a video, or just monitor Twitter or Facebook much more easily.

Just when you had settled on that brand new LED/LCD TV with 3D and smart features, LG pre-announced a 55-inch OLED prototype, and it is drop-dead gorgeous. The company is hinting at an aggressive price point that still will likely be more than twice what a similar LED/LCD TV might cost, but it knows the pressure will be to get that price more competitive. If it does, we are so screwed, as we’ll want one.

This TV is about as thin as a pencil (if you can remember what a pencil looked like) or 5-millimeters thick (an iPad is 8.8 mm thick as a comparison). Other than price, the bad news is that OLED TVs are infamous for their short lifespan, and most of the last generation appeared to lose 50 percent of its brightness within the first year. That makes even the original plasma technology look good by comparison.

So, I’ll be watching to see if LG has addressed this chronic OLED problem. The good news is that not only are the TVs fabulous looking, they tend to use less power — so you might be able to justify buying one to your spouse because it’s green. Good luck with that.

Expect to be up to your armpits in 4-plus core tablets running technology from Nvidia and Qualcomm. This will be the changeover year, when tablets stop being mostly about consumption and move solidly into creation.

Hovering over the show will be the rumored announcement of the iPad 3 brought to market early to fight off this emerging breed of high-performance iPad alternatives.

Most of the products will show up later in the year with the initial batch running Ice Cream Sandwich (which was recently pulled due to battery issues and a nasty tendency to brick devices). We’ll see if tablets survive as a separate category this decade, but they’ll likely still be hot in 2012.

IBM will be back at the show for the first time in years, and it is expected to showcase security and technology solutions (rumored to be the ones that helped Apple with the iPhone 4 antenna problems).

IBM has made some interesting predictions for next year, including mind control for computers (targeted mostly at paralyzed patients).

The most pertinent to CES is effective biometrics to eliminate the very vulnerable passwords we now have on our smart devices, and this couldn’t be timed better given how vulnerable folks like McAfee say we now are.

Wrapping Up: Last Year for CES

I was on the advisory council for Comdex the year it failed, and the reasons were similar to what now plagues CES. The show was ill timed, it had become too broad, and the major players just didn’t see the point anymore.

CES really comes too soon after Christmas now for the OEMs to be ready to showcase products for the following fall, and the show has become so broad that getting around it is a huge pain in pretty much every part of our bodies.

Buyers tend to meet with vendors on their own schedule, and while this does provide a great place to meet a lot of people, remembering any one of them becomes problematic, due to the number of meetings.

Apple hasn’t been a CES supporter, and it even pulled out of MacWorld for similar reasons. While I doubt this will be the last year for CES, the Microsoft pullout indicates the show is trending down and will likely need to be rethought for this century if it is to survive and prosper — likely as a set of smaller, better-timed and better-focused events.

I’m one of those folks who can’t give up a keyboard, which is why I looked forward with anticipation to the Samsung Captivate Glide. It uses a dual-core Tegra 2 processor, and while it is relatively thick due to the keyboard, it feels good in your hand due to the nice finish on the back and rounded corners. 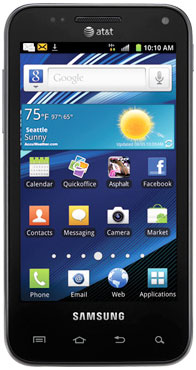 Samsung did a nice job with expansion, in that you can get access to the SIM and Micro SD slots without the more normal battery removal process with most phones in this class (though you still have to unsnap the back of the phone. The phone’s 8 megapixel camera is arguably the best I have yet seen on a phone for stills, though you can find better for HD video.

The only real downside is that this phone is HSPA+ and not LTE, but given AT&T (this is an AT&T phone) hasn’t fully rolled out LTE and that LTE has a nasty battery life tradeoff at the moment, this may be OK for you.

Usability is good for an Android phone but this one doesn’t yet use the latest version of that platform (which, given the breakage, may be a good thing). In the end, for a $150 phone, it makes few sacrifices.

If you are in the market for a new smartphone this year, and you can wait on LTE but want a keyboard, it might be worth checking out the Samsung Captivate Glide, my first product of the week for 2012.