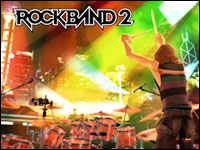 Wii gamers who felt let down by the absence of download functionality for the original “Rock Band” video game will have more than just a playlist of new songs to look forward to with the upcoming release of “Rock Band 2” (“RB2”), expected to hit stores in November.

MTV Games confirmed Tuesday that “RB2” will include online features, enabling players to download new tunes and participate in online multiplayer modes on the Wii.

Versions of “RB2” for Microsoft’s Xbox 360, released Sept. 14, and Sony’s PlayStation 3 (PS3), set to launch mid-October, both offer gamers these capabilities, as was the case in the first iteration of the game.

The PlayStation 2 (PS2), however, will remain offline, according to MTV Games.

“Most PS2 owners have either converted or are very late adopters, so they are waiting to buy a next-generation console before they buy an expensive game like ‘Rock Band.’ The game costs around the same as the Xbox 360 Arcade, so it’s hard to justify a purchase for the PS2,” Michael Pachter, a Wedbush Morgan analyst, told TechNewsWorld.

However, the problem with adding the ability to download game content is where to store it. The Wii, unlike the Xbox 360 and PS3, does not include a built-in hard drive with a great deal of storage capacity. Instead, the market-leading console includes an SD memory card slot for those who need to store more than the paltry 512 MB of game storage included with the Wii.

The announcement from MTV Games on the additional functionality for “RB2” may lend credence to rumors that Nintendo plans to release an external hard drive accessory for the Wii.

That said, Pachter does not think that many Wii-ers will download the songs.

Harmonix and MTV Games have equipped “RB2” with other upgrades over the original.

“The drum set is clearly improved, and the song list is long and impressive,” Pachter noted.

While the original game is a scant nine months old, the new version is well-suited to the Wii audience, he continued.

“The Wii can accommodate multiple players (up to four), so putting a band together should not be a problem at all. ‘RB1’ came out on the Wii in June and appears to be working well. If anything, I think the Wii audience is the core music-themed game audience, as they are far more casual, on average, and the Wii has trained them to use peripherals,” Pachter concluded.