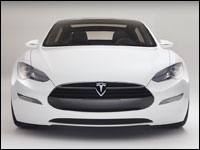 In 2003, a group of engineers got together in Menlo Park, Calif., and began developing an all-new electric vehicle — what would become the world’s first highway-capable electric car.

“[They] wanted to show the world that electric vehicles could be awesome,” Khobi Brooklyn, a spokesperson for the company they formed, Tesla Motors, told TechNewsWorld.

There hadn’t been many car manufacturing startups since the beginning of the 20th century, so the Tesla project was unusual. The first car it built, the Tesla Roadster, began with the creation of Tesla’s proprietary electric powertrain technology. The company’s cofounder, Elon Musk, managed the Roadster’s development and recruited chief technology officer JB Straubel. In July 2006, the Roadster hit the roads.

“Tesla built the Roadster to prove that electric vehicles can match the performance and beauty of the world’s most coveted cars,” explained Brooklyn. “Not just the world’s first electric supercar, it made headlines when it launched in 2008 as the only highway-capable EV in production on the planet.”

“The Roadster catalyzed the industry to go electric and laid the foundation for future long-range Tesla vehicles,” he explained. “With an EPA-tested range of 245 miles, gorgeous styling, and acceleration from 0 to 60 mph in 3.7 seconds, it instantly became one of the world’s most coveted sports cars.”

Since that first release, the company’s vehicles, including its recent Model S, have continued to be built with a combination of range, performance, style and efficiency.

“Model S is the world’s first premium sedan engineered from the ground up as an electric vehicle. [It] was designed around is its floor-mounted, efficiently packaged electric powertrain, which delivers unprecedented range and a thrilling driving experience,” said Brooklyn.

“The lack of a bulky internal combustion engine under the hood opens up the interior of the car for industry-leading passenger and cargo space,” he continued. “The flat battery gives Model S a low center of gravity and ideal weight distribution for responsive, precise performance.”

The company’s cars are known for their range, and even the smallest battery-pack option with the Model S offers around 160 miles per charge, which Brooklyn says is higher than any other production electric vehicle.

The company is also working to appeal to a variety of consumers, including those who want to do some off-roading — and its third vehicle, the Model X, can be equipped with all-wheel drive.

Customers are loyal to the brand and to the cars because of what they have to offer, Brooklyn said. Twenty-two hundred Roadsters have been sold, and more than 20 million electric miles have been driven on Teslas.

“Owning a Tesla is easy — there are no smog checks, oil changes, timing belts or spark plugs to replace, or trips to the gas station,” he explained. “By plugging in each night and ‘topping off’ the car’s charge, owners wake up to the equivalent of a full tank of gas every morning without ever visiting a gas station. In addition to saving money on fuel and maintenance, Tesla drivers are reducing our dependence on oil.”

Another small electric car company, Fisker Automotive, was founded in 2007 by Henrik Fisker and Bernhard Koehler. They too started their company out of a love and passion for the possibilities of electric cars.

“Henrik Fisker believed that an environmentally responsible vehicle did not have to compromise on design and style,” Roger Ormisher, senior director of global corporate communications and public relations for Fisker, told TechNewsWorld. “Built on these principles of uncompromising design, environmental stewardship and disruptive technology, Fisker produces cars that deliver pure driving passion.”

Fisker touts its long range, creative design, and efficiency — both in the car and its manufacturing processes.

“Everything we do is with efficiency and the environment in mind,” said Ormisher.

“Suppliers are selected in part for their environmental concerns. Sales and marketing collateral are distributed electronically whenever possible, minimizing the use of paper,” he pointed out.

“Our retailers are also environmentally responsible and use solar signage at retail facilities and reclaimed materials where possible,” Ormisher noted.

“Our lifestyle merchandise is created from environmentally sustainable sources and materials. Printed sales collateral uses recycled and soy-based inks whenever possible. Display materials, such as those used at auto shows, use a variety of eco-friendly materials,” he said.

“In addition,” Ormisher noted, “during recommissioning of our plant in Delaware we have salvaged and recycled as much material as possible.” 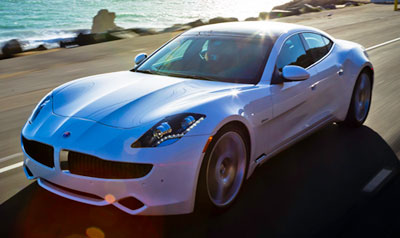 The Fisker Karma, which ranges in price from US$102,000 to $116,000, is driven only by electric traction motors,” he explained. In addition to a 20 kWh rechargeable lithium ion battery, the car has an on-board range-extending gasoline engine that powers the motors as necessary.

Running only on the battery the car can cover 50 miles, and the range extender gives it another 250 miles after that.

Because of its price, the car appeals primarily to premium luxury car buyers.

“Fisker Automotive is about uncompromised responsible luxury,” explained Ormisher. “We believe that environmentally conscious vehicles can still deliver the style, passion and performance that made us fall in love with cars in the first place.”

The one thing all Karma buyers share, said Ormisher, is a commitment to the environment.

“Our consumers are reaching beyond the needs of traditional sports car buyers as they look for an alternative that satisfies their environmental as well as their design needs,” he said.

“These customers are looking for alternatives to conventionally powered vehicles, and for a variety of reasons,” Ormisher noted. “For many, the key factor is environmental concern. For other customers, concerns about national energy security drive an interest in alternative-fuel cars, including hybrids and electric vehicles. There are also customers who are attracted to these vehicles by the styling and technology itself. The Fisker Karma and future models will appeal to all of those groups.”

An even smaller electric car company, the Electric Car Company of Missouri, is just getting off the ground. Currently it markets its cars primarily in the Caribbean, though a few are on U.S. roads as well. One unique thing about this company’s cars is that they use regular, deep-cycle, maintenance-free batteries — 10 of them, strategically placed throughout the car and linked together. 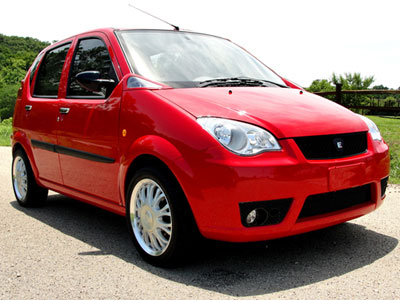 “We’ve taken the approach that everything in the car should be repaired by going to the store,” Scott Diamond, the owner of the company, explained to TechNewsWorld.

The company’s car, which sells for $17,000 to $21,000, is sold under a variety of private-label names, and it’s particularly popular in the Caribbean because its limited range of 50-70 miles doesn’t matter as much in a place where people drive relatively short distances.

“When you have a 20-mile island, you don’t get the how-far-can-my-car-go question,” explained Diamond.

Though it can reach up to around 60 mph, the car is a low-speed vehicle, intended for going 30-45 mph on surface and city streets. Its range varies from 50-70 miles, depending on the temperature and driving conditions.

“It’s highly engineered for efficiency,” said Diamond. “If we’ve done anything, we’ve targeted efficiency. It’s a synergy of taking the right car at the right weight, and building the car from the batteries up, rather than seeing what the car should be and then deciding what it will take to power it.”

The car is a hard sell in the U.S., where people tend to want long-range vehicles, Diamond admitted.

For most commuters, however, a low-range vehicle is just fine — and with the money they save on fuel they can rent a car for longer trips, he argued.

“The reality is, if you do the math, if you buy a car that does your basic needs and you want to drive somewhere long distance, you rent a car,” suggested Diamond. “Financially, if you’re paying $10 a month to run your car, you can afford once a year to rent a car for a long trip.”