What’s Missing in the iPad Air 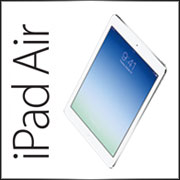 Apple fans generally have a cow when I write about things left out of an Apple product, because to them, anything Apple brings out is perfect and to suggest otherwise is heretical. Given that I think fanboys give up their intellectual freedom to the vendor or product they religiously follow, I tend to wear the Apple Heretic badge with honor — and thus I’m going to point out the technologies the Microsoft Surface 2 and Nokia 2520 products have that the new iPad Air lacks.

I’m not arguing that loyal Apple fans will switch, but I am suggesting that Apple no longer owns the gold standard for tablets. In fact, I doubt any one vendor owns it today, which means you get a lot more choice — and, if you aren’t joined at the hip to Apple, you’ll likely find a more useful product from another vendor.

I’ll close with my product of the week: my new favorite 7-inch tablet, the Amazon Kindle HDX.

Let’s set the scale and talk about the Apple Air for a moment. For this refresh, Apple basically put the iPad on a diet and cut about four-tenths of a pound off its 1.4 lb. tablet. This is significant, but I didn’t hear anyone really complaining that the 1.4-lb. device was too heavy. The iPad was already one of the more fragile tablets, and making it even thinner will increase the risk of breakage significantly. Granted, it is beautiful to look at, but tablets and smartphones are dropped.

The tablet got the power it needed to run the new OS, and this is likely the strongest reason to replace your old iPad with a new one, as folks have complained that loading the new OS on any of the previous versions of Apple’s tablets or smartphones will cause them to feel significantly slower. The Apple tablets are pure tablets, as Tim Cook pointed out. You can add a Bluetooth keyboard, but iPads are designed to be held and really don’t do that well as a laptop alternative.

This is by design, because Apple wants its customers to buy a MacBook as well, so it can get the added profit, and this has been a very profitable strategy. So, moving from Apple to a product that is more dual-role potentially could provide you not only with a small savings over the premium iPad price, but also — depending on how you work — possibly save you the cost of a US$1,000 laptop.

The Surface 2, which uses the new Nvidia Tegra 4 processor, brings a number of features the iPad lacks, though at a weight that is closer to the old iPad. The backlit magnetic keyboard is likely the coolest feature, as is the option to have a version with a booster battery that increases battery life by about 50 percent.

The keyboard serves as a cover and protects the tablet screen, which is the most fragile part of a tablet. It also has an adjustable kickstand that eases watching movies and, combined with the keyboard, can create a better laptop-like experience for work. You actually don’t really need a laptop with this unless there is some old legacy Windows stuff you have to work with — which won’t work on any other ARM-based tablet either.

It has a magnetic power plug, one of the things I’ve always envied in MacBooks that didn’t make it over to the IPad. If you’ve ever tripped on your power cord and had your heart stop as your laptop or tablet fell to the floor (I’ve broken two laptops and one tablet this way), the magnetic connecter that pops off the product is a huge benefit.

On the Surface 1, the plug was too tight, and my Surface Pro did a header as a result. Microsoft fixed it during the model run, and the plug disconnects nicely now. It has both USB 3.0 ports and a micro-SD slot that takes the tablet up to 64 GB of storage total.

The Lumia 2520, which uses the new Qualcomm Snapdragon 800 processor, also has an optional keyboard. Like some of the best iPad aftermarket keyboards, it uses a slot to hold the tablet. However, it provides a 50 percent battery boost, which isn’t available from the Apple keyboard.

It has a 650 nit screen with mask to provide a far better outdoor experience. It has a Tesla-like fast-charge battery, which can be a godsend as it can go from near zero to 80 percent charged in one hour. (Note: Never discharge a lithium ion battery completely, as it will significantly shorten the life of the battery.)

Like the Surface, the Lumia 2520’s weight is in line with the old iPad, but it is cased in plastic (the Surface and iPad are metal cased,) which should protect it better in the case of a drop.

The Nokia shares the SD and USB advantages. Just this week, a friend of mine was having connectivity problems with her Apple product and without the USB port had no way to get her work off her device, shutting her down until she could get the problem sorted. That little USB port can be a godsend in an emergency.

One feature that exists either built in or as an option on Nokia phones is inductive charging, and I mention this because it really makes charging a dream. You just set the product on a charging pad, and it charges. The reason we don’t see this more often is that it adds to the thickness of the device and there are several inductive charging technologies out there that aren’t compatible with each other.

The 2520 uses a laptop-like circular plug that is actually easier to attach than most, but both the Surface and new iPad plug are far easier in the dark than the damn micro-USB plug that all but the iPhone use to charge (including most small tablets).

Wrapping Up: Thinner Is Cool but the Tradeoffs Are Ugly

I remember an ad that Lenovo ran with its old X series laptop against the MacBook Air. Its product had a full set of ports, and Lenovo created a video that showcased what happened to the manila folder when you put the Air and all of the adapters you needed to get the ports back into a mailing envelope (the envelope failed catastrophically).

Apple is brilliant because it gets people to pay more to get less. I buy the idea that weight is important. I just doubt people will value four-tenths of a pound more than an SD slot, USB port, magnetic charging or fast-charge battery. Add to this the significant premium you pay for an iPad over its competitors with a similar configuration — particularly when you compare it to the Nokia LTE-equipped 2520 — and it just doesn’t seem to be a good value unless you just have to have the latest Apple product. (To some, that alone is worth the price.)

Choice is a good thing, and perhaps choice is the biggest feature absent from the new iPad Air — and every Apple product. Yep, I’m an Apple Heretic, and proud of it!

I’ve been focusing on 10-inch tablets in this piece, but I actually carry my 7-inch tablet more often, because I use it as a reader and in situations when my smartphone screen isn’t big enough. I took a poke at Apple fanboys earlier in my piece — but I confess I’ve been hooked on Kindles since they first launched.

I’m a reader, and while I started with Amazon’s ePaper products and have a Kindle Paperwhite, I mostly carry the Kindle Fire, and it was with great anticipation that I awaited the arrival of the Kindle Fire HDX. At around US$230 for the 16 GB option, it is a bargain when compared to the similar but far more expensive iPad Mini with Retinal display. (Get at least 32 GB, at $269, if you want to watch movies on the plane; the 64 GB is a reasonable $309.) 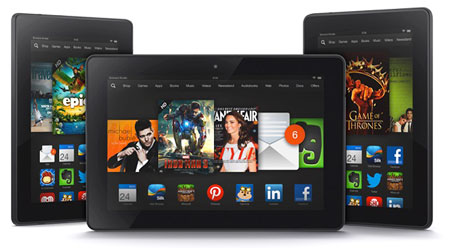 The new display is gorgeous. Amazon has improved the polarizing filter so it works better outdoors than the old Fire HD did, and it’s added some decent stereo speakers and upped the performance. The Kindle Fire HDX has the same stunning Qualcomm Snapdragon 800 2.2 GHz 4 core processor as the Nokia 2520 above.

It is a decent game machine. During my flight to New York last week, I gamed on it all five hours and still had plenty of battery left to read when I got to the hotel — something I couldn’t do on my old Kindle HD. This points to the real reason I carry both a smartphone (the amazing Nokia 1020 at the moment) and the Kindle, because I don’t run my smartphone battery down while gaming or reading on the Kindle.

Initially, the new Kindle OS seemed a little flaky — it was rebooting a bit — but that has stopped, and it is as stable as the old one (fingers crossed), which was as reliable as an appliance. You are tied somewhat to the Amazon walled garden with the Kindle, but it will run most Android apps (it runs a fork of Android controlled by Amazon) and that includes Netflix.

Unlike Apple, LTE is a no-charge upgrade, but I’ve so far avoided it (hate multiple data plans and use an LTE cellular access point from Verizon instead, which works with all my tablets and laptops). In the end, I’m very impressed with the Amazon Kindle HDX, so it has to be my product of the week.