Verizon Wireless has introduced a new device that routes its cell phone traffic over a consumer’s household broadband connection, effectively creating a mini cellular service network inside the user’s home.

The new box, called “Verizon Wireless Network Extender,” is designed to let Verizon Wireless customers use their cell phones at home in situations where they don’t typically have good service signals. 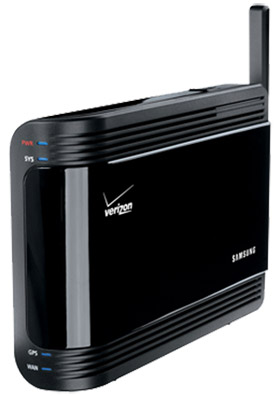 “Our new Network Extender device will bring the full benefit of the Verizon Wireless voice network to the small but important segment of customers who may experience a weaker signal in their homes because of geographic or structural conditions,” noted Jack Plating, executive vice president and chief operating officer of Verizon Wireless.

“For those who have wanted to sign up for Verizon Wireless service but hesitated because of reception problems unique to their home location, this is the answer,” he added.

The Verizon Wireless Network Extender acts as a small cellular base station, also known as a “femtocell.” The device, which is about the size of a wireless router, is manufactured by Samsung. The calls are routed seamlessly through the Network Extender via a broadband Internet service connection in the home. It covers up to 5,000 square feet.

“As far as your cell phone is concerned, it thinks it’s connected to a tower, but that tower happens to be a little box in your home,” Ken Dulaney, a vice president analyst of mobile and wireless for Gartner, told TechNewsWorld.

Positioned for Nooks and Crannies

While Verizon Wireless is touting the cell-site-in-your-home idea, the company’s press materials also make it clear they are positioning the Network Extender as a solution for customers who have particular service challenges.

Network Extender is ideal for situations that include houses with structural barriers, basement rooms, or remote, mountainous, or hilly areas that are signally challenged. Network Extender also can provide improved network access for customers living on the geographical fringes of the Verizon Wireless network.

“You can use it where there is no signal, but you have to be an area where we own the spectrum,” Brenda Raney, a spokesperson for Verizon Wireless, told TechNewsWorld.

Network Extender does not support EV-DO speeds and services that require it.

While some customers may see the Network Extender as an opportunity to ditch their landline phone service altogether, it’s not without some possible gotchas: Customers, their Family SharePlan members and other Verizon Wireless customers can use their current phones and calling plans to place calls using the Network Extender, but they will be charged minutes and data usage according to their current Verizon Wireless Plans. So households with chatty Cathys who tend to rack up minutes on a landline might run into some interesting bills by switching to Network Extender without adjusting their plans or talking habits.

Still, Verizon isn’t charging anything extra to use the box — just the cost of acquisition.

While the Network Extender acts like a mini cell tower, it only supports three active calls at one time. However, there’s always a fourth channel available for 9-1-1, Raney said.

What About the Neighbors?

“There are safeguards built into the device so neighbors can’t use it,” Raney said.

“What it does for the carrier is extend the coverage, but it does also permit them to use the customer’s broadband as a way of backhauling calls as opposed to having to invest more in their own backhaul networks,” Dulaney said.

“They can effectively increase capacity of local cells by offloading traffic over to the DSL (digital subscriber line) or cable connection in your home — so it takes some of the load off,” he added.

While femtocells are relatively new and niche-oriented, Dulaney said, they could catch on and result in organically grown networks that effectively provide better coverage to many users in certain areas.