One of the ironies of my technical career is that when I first went to work for a tech company, I specifically wanted to work for a firm that was breaking the mold — not representative of it. So, in my initial interview, I was concerned that IBM was going to buy the firm because it was the mold at that time.

I was promised it wasn’t, and that there was a contract that said it couldn’t. Then, six months later, it did.

IBM nearly failed six years after that, largely due to two strategies Apple now has embraced: vertical integration and lock-in. As a result, I’m very sensitive to these strategies — especially, to their negative potential. Given that the huge breach Apple experienced last week could be connected to one of them, I figure it’s time to speak up.

These strategies have their positive side — they can make a company dominant and incredibly profitable over the short term. However, they can lead to behaviors that are company killers. They nearly killed IBM, which once was a far larger and more diverse company than Apple is.

I’ll close with my product of the week, HelloMD, a godsend for medical marijuana users. It removes a great deal of the pain that the government unfortunately and needlessly has piled on them.

Vertical Integration in a Hostile World

A company becomes vertically integrated when it controls all of the components that go into its product. When Tim Cook handled Apple’s supply chain, he was one of the company’s greatest assets. By writing incredibly aggressive contracts, Apple was able to get most of the benefits of vertical integration without actually owning the underlying technology.

However, with processors it has been drifting toward vertical integration, and its ARM processor design is Apple’s own.

The problem is, as powerful as the company is, it doesn’t have the R&D budget for processors that a processor company like Intel or Qualcomm does. The end result is likely to be inferior to what the other vendors can do.

We saw a touch of this when Apple was on Power, IBM’s processor. IBM, even with all of its mass, just couldn’t keep up with Intel on devices. One of the first things Steve Jobs planned to do was to take Apple to Intel.

We saw the same thing with Nintendo and Sony and their game consoles. They went from the IBM Cell processor to AMD, which was willing to take the x86 technology and adapt it to their needs.

The current example of this problem occurred last week, when Apple was massively breached in an ironic set of circumstances. The irony was that the breach originated in China but the hackers used a technology that the CIA apparently had developed.

Increasingly, it is looking like our own government is our biggest security problem — specifically the agencies that are missioned with keeping us secure — and it’s getting kind of old.

For the type of ARM problem that led to the Apple breach, there’s only one fix currently available in the smartphone market — and it’s over at Qualcomm, which is the company virtually every other large cellphone company uses for core technology.

The solution will ship until early next year on Qualcomm’s 820. When it does, it will be capable of securing phones from this class of exposure, and it should make Android phones far more secure than iPhones as a result.

Given that the breach was caused by legitimate developers being tricked, and that the resources used apparently came from both the Chinese and U.S. governments, it seems unlikely that Apple can mitigate these problems alone. That raises the specter of next year’s new iPhones being the only premium phones vulnerable to attacks like this. That likely would bar them from any place where security is a concern. (I don’t know about you, but for me, security is a concern right now.)

In short, Apple’s move to vertical integration with processors could end up killing the iPhone, and the benefit just doesn’t warrant the risk.

The Lure of Lock-In

Lock-in is so tempting. It’s the practice of embracing customers so completely, they can’t move. It typically gets established when a firm takes especially good care of its customers and then wraps them with layer after layer of specialized applications and services, so that the cost of moving to something else is just not worth it. Don’t get me wrong — as long as you are being well treated, you don’t care.

There are two huge problems with this approach, however. The first is that it also locks in the company to a specific approach, and it can’t move. Years ago, I did a competitive analysis on a product called “Crosstalk.” It was a program that got people online before there was an Internet, and it was so incredibly complete that nothing could compete with it.

Crosstalk owned the market — then the Internet happened, and it was gone. The company never saw it coming, and by the time it realized that it needed to evolve, it was done.

The other example is IBM, and I felt this personally. I was having issues with IBM’s practices of charging customers for fixing product defects and promising to build products they had no plans to fund. I brought this up to the CMO of our division, and he explained that IBM basically sold air. Customers were locked in and didn’t have a choice, so the firm could do whatever it wanted — and it wanted to milk those customers for cash.

That was a huge departure from the ideals that created the company, and while it did wonderful things for IBM’s profits in the short term, the customers eventually revolted. When that happened, the company almost went under. (That CMO was fired.)

That is the big problem with lock-in. The company eventually stops growing the number of customers, and the executives realize the easiest way to grow revenue is to mine its customers for money. Customer satisfaction goes out the window. The firm spends customer loyalty until it is gone, and the firm fails.

Apple is nowhere near that phase yet, and I doubt it will get there this decade — but if this outcome isn’t aggressively mitigated, one of Apple’s biggest assets could eventually kill it.

Take a look at what a new hotshot CEO just did in the medical space. He realized that he had a lot of people locked into a specific drug, and so he increased that drug’s price by more than 5,000 percent (that’s not a typo — 5,000 percent). He’ll make a ton of money in the short term, but I think it’s likely that in the long term, the company will fail due to the backlash.

That’s what executives do, particularly new, young executives. They go for the cash and kill the company. (As I finished this piece he was rethinking his position, likely because an animation went up just pillorying the guy — it is pretty funny).

One thing I find fascinating is that over the years, when I’ve brought up things like this about Apple, it later would come out that Jobs was thinking of them as well — and before the problem emerged he had a fix in place. Cook may be showing the same tendencies, because as I was finishing this piece a well-sourced rumor broke. It appears that Apple is going to switch from ARM to Intel for the iPhone 7.

Intel also has a security solution like Qualcomm’s, which could be applied to smartphones. It goes without saying that this one deal would take Intel from an also-ran in the smartphone space to a power to be reckoned with. Intel has a very unique and powerful relationship with Apple, and that move would eliminate the vertical integration problem I highlighted.

The problem with lock-in likely won’t occur on Cook’s watch, but he should anticipate it and put in place some long-term protections. In that way, he could secure the future for Apple and ensure that the loyalty customers have for the firm never will be used against them.

This is less about Apple, which still appears to have competent management, than about avoiding the company-killing mistakes others have made. I feel that if we know about them, we can keep our companies from making those mistakes — and maybe avoid buying from firms that can’t seem to avoid making them. Fortunately, that’s not Apple — for now.

Two things really piss me off. One is the way the Veterans’ Administration treats the people who put their lives on the line for our freedom (like crap), and the other is how federal, state and local governments treat those who depend on medical marijuana (generally, also like crap).

Many people need this stuff so that they can tolerate what is often a massively shortened lifespan. It is a quality-of-life cure. I’m thankful I don’t need it, and that I’m in a state that has legalized the stuff. However, in California, where I grew up, it’s an embarrassment that people have to go through so many hoops to get some relief for the unacceptable levels of pain and suffering they endure each day.

Doctors who know the process are exceedingly hard to find, the paperwork required is daunting, and the state puts the dispensaries in locations where carrying cash or cannabis is likely life threatening. Oh, and because of federal law, you can buy it only with cash or a digital currency like bitcoins. If we did this to convicted murderers, the courts likely would rule the punishment cruel and unusual.

HelloMD, an app that runs on a smartphone, connects you to a deeply vetted doctor who knows how to get you the approval you need, collects the documents you’ll need to supply and provides them in a secure digital format, and connects you to a dispensary — in many cases, one that will deliver. 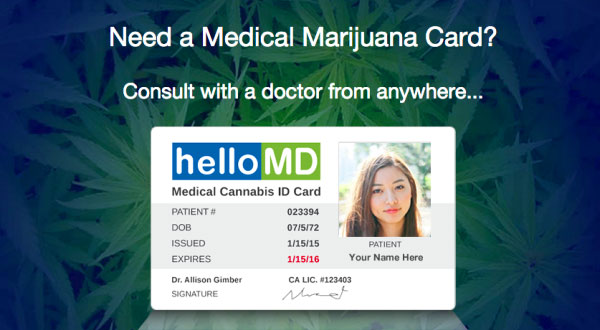 It basically takes over 90 percent of the pain of an incredibly painful process focused on people who already are under unacceptable levels of pain away. Granted, the real fix would be just to legalize, tax and regulate the stuff, but until government gets a clue, HelloMD could make the difference between wanting to fight for life and just wanting it to be over.

HelloMD is a noble effort to help prevent the government from screwing people in need and, as a result, it is my product of the week.