If there was ever a year for train wrecks, 2011 was it. It is that time when we look back at the screwy decisions executives made last year, and be thankful that we aren’t them. There were a number of career-limiting moves last year that warrant a top spot on my Bozo meter.

I’ll end with my product of the year: the 2011 product that I found I just couldn’t live without.

What’s particularly sad about the HP Touchpad is that — like the Palm Pre — it had the promise of kicking some Apple butt. But where it seemed to bypass the Pre was in the sheer number of mistakes that were made.

From the name of the product — which neither pulled from the HP-owned and iPad-similar name “iPaq” nor truly fit within its existing TouchSmart line (TouchSmart Tablet) and was confusing (“touchpad” is what you call the mouse replacement on a notebook computer) — to the wrong-headed marketing, to the fact it was so late to market, it was no longer competitive.

This was only topped by the catastrophic removal of the product from the market and the burnout price of US$100, which resulted in long lines to buy it while pissing off retailers like Best Buy, which had sent its stock back. This appeared to be either another example of the Apple 5th column I’ve been writing about or a blatant attempt to get HP’s new CEO fired. Since he was fired… . But at least HP kept the core technology of this $1.2 billion acquisition alive — not so with Cisco.

Cisco purchased the top selling under-$100 camera company, Flip, and intended to make the devices its WiFi eyes in the home. In short order, it nearly tripled the cost and price of the cameras, setting them up to compete against some of the best cameras from companies like Nikon and Canon without taking the trouble of actually making a product that could compete at this stratified level.

Then, just before releasing the camera that would make its networking dreams come together, it shut Flip down, even though the camera was still No. 1 in the segment, despite all the blunders. That was a half-billion dollar total writeoff — Cisco didn’t even try to sell the asset. This one move put John Chambers ahead of Leo Apotheker for CEO bozo of the year, with the difference that Chambers is still in his job — Apotheker isn’t.

Here is a great idea: Let’s bring out a Windows-killing product, pull together some partners around it, and then starve it to death, making those partners look stupid.

Yes, Google launched the Chrome OS to great fanfare and underfunded marketing. After months in market, the Chrome OS is still largely unused and unsuccessful. OK, the Chrome OS sucks, but the real disaster is that Google actually makes its money from advertising — it is in the advertising business — but it apparently neither understands nor believes in advertising.

This is like a company that sells cars being made up of employees who think driving is stupid. If the world followed Google’s example, Google would go under. Major failure, but dwarfed by…

Google was on a run and brought its incomplete Google TV product to market and got the CEO of its biggest supporter fired. Yes, Logitech — the company that backed the Google TV heavily was actually getting more returns for its Google TV offering than it had sales and exited the market so catastrophically that its CEO got fired.

It takes one hell of an effort to do so badly the head of your most supportive customer gets the boot — and when it comes to doing badly, Google seems to take the prize. You can’t beat this. Oh wait…

Google effectively topped its TV debacle with its big Los Angeles deployment. After months of trying to get its solution to work, it finally appeared to hit a wall and admitted it just couldn’t do it.

Apparently, no one had told Google that a government law enforcement account would need to meet security standards. Who knew? That is, except virtually every other vendor that has ever had to sell into a government account.

It is pretty impressive to create a hugely visible reference account and then piss all over it in public. I haven’t seen this big a screwup since Netscape. This has to be the topper, right? Well, no…

Eclipsing the Los Angeles screwup was stealing the idea for Android from Steve Jobs and Apple. Sadly, Steve Jobs died this year and toward the end, as told through his approved biography, his ire was directed not at Microsoft but at Google for stealing Android.

You see Steve, who was already sick with cancer, took his valuable time to mentor the Google founders and even put Eric Schmidt on his board — one of the most sought-after board positions in the world.

Google then decided to clone Apple’s signature iPhone. This likely sets a record for betrayal that will take decades to exceed. OK, nothing can beat this. Except…

Apple was far from the only company alleging that Google stole from it. Microsoft and Oracle (Java) also have. And as I write this, British Telecom has jumped on the “take Google to court” wagon. Companies that are and aren’t Google competitors are lining up to complain that Google has stolen from them.

These aren’t little patent trolls, either — they are mostly all major multinationals. And they aren’t just going after Google; more are actually going after the licensees of Google’s Android platform.

This has likely made Android the most expensive free software product that has ever existed and made Google the best thing that has happened to the IP litigation industry in a lifetime.

Bozo of the Year: Google

Seriously, you can go down a list of companies that aren’t doing well and not see this kind of overachievement in screwups that you see with Google. As I’m writing this paragraph, two U.S. senators are pushing for antitrust action against the company.

This has been an impressive year for Google, and it appears to have done more stupid things during 2011 than Microsoft, a company Google thinks is stupid, has done in a decade.

That’s overachieving, Google — but I suggest that in 2012, you might actually want to overachieve on something positive.

Product of the Year: Audi A7

I look back at all of the products I reviewed this last year, and there were some good ones. I was impressed with the Kindle Fire. The Lenovo ThinkPad X1 and the Toshiba Ultrabook were great, and I fell in love with Sonos when it got Slacker. Even the new TiVo has been a blessing. 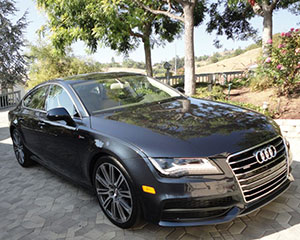 But in looking back, the one thing that just put a huge smile on my face was the Audi A7. It had the room of my Infiniti FX35, the performance of my Audi S5, and a media system using Nvidia technology that just blew my socks off.

I am a car guy at heart, and when I went back and reread my reviews and took another look at all of the products, the one product I wished I still had was that Audi A7 — though granted, I’m convinced I’d like the coming S7 better (420 HP).

A product that not only combines the best features of the cars I own, but also has the best technology solution in the market, for this tech analyst, has to be No. 1. As a result, the Audi A7 is my product of the year. Apparently, Automobile agrees.