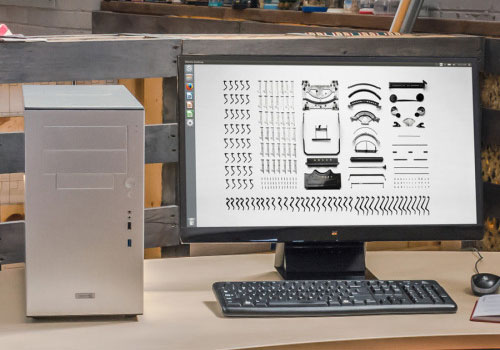 “The Wild Dog Pro proves that Linux users can have the absolute latest and greatest in hardware innovation,” said Carl Richell, president of System76.

System76 engineers its products to run Ubuntu flawlessly with today’s most advanced technology, he told LinuxInsider. Pricing starts at US$769.

Wild Dog Pro offers a choice of either a sixth-generation Intel multicore, multithreaded Core i5 Skylake processor, or the Intel i7 water-cooled 6700K processor. The chipset is Intel H170 Express.

Solid state and standard storage options are M.2 SATA SSD up to 3×2.5 inches or 3.5-inch drives up to 18.5 TB. Networking options include Gigabit Ethernet or Intel Wireless-AC (a/b/g/n/ac).

The Wild Dog Pro is configured with an impressive collection of ports and accessory connectors, including front and rear data ports for both USB 3.0 Type-A, USB 2.0 Type-A and USB 3.1 Type-C. The power supply is rated for 500W to provide 80 percent or greater power efficiency.

The desktop chassis is lightweight brushed aluminum. It comes in silver or black and measures 14.75 inches high by 8.25 inches wide by 19.25 inches deep. The Wild Dog Pro weighs 17.5 pounds.

The newly remastered software images do not include Adobe Flash. That omission is based on security concerns and the lack of any real need for Flash to gain a full Web experience, according to System 76.

The Wild Dog Pro desktop stands out from any desktop — not just Linux — with its high-quality brushed aluminum build and extensive expansion and customization capabilities. The machine is designed to last, according to Richell.

“While thin and light computers and all-in-ones are a great fit for some users, they sacrifice performance and storage to achieve their size. The Wild Dog Pro is designed for creators and engineers that don’t want to make sacrifices. It’s quiet, powerful and beautiful,” he said.

The Wild Dog Pro is an interesting product that is “a decidedly different game than traditional Windows-based PCs or even some workstations,” said Charles King, principal analyst at Pund-IT.

The new desktop release targets engineers, designers and other professionals who appreciate or need top-of-the-line technical features and performance in a Linux-supported solution, he told LinuxInsider. That is a growing market for Linux users.

“There are more of those folks than you might think, especially in technically savvy companies that develop their own Linux-based applications and tools in-house,” King pointed out. “The Wild Dog Pro units sell at a premium, but System76’s ongoing success suggests that there is a sizable audience for thoughtfully and well-designed Linux-based desktop systems.”

The Skylake processor makes more of a difference for Linux support than anything in the box, noted Rob Enderle, principal analyst at the Enderle Group.

“Typically with Linux, you are left to the mercies of the Linux forums — which can be really hostile and unforgiving — and your own skills to resolve problems. System 76 takes care of most of that for you,” he told LinuxInsider. “The end result is that with one of their systems, you can focus more on your job and not on doing your own tech support.”

System 76 makes sure the system works out of the box, Enderle said, and consumers know that there is someone reasonable to call for help when there is a problem.