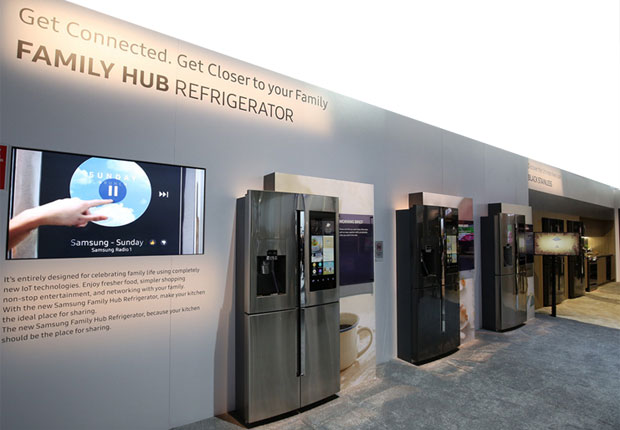 Samsung on Wednesday unveiled the Family Hub Refrigerator at CES, ongoing in Las Vegas through Saturday.

The new refrigerator sports a 21.5-inch full HD LCD screen on the upper right outside door, which doubles as a communications center.

The Family Hub Refrigerator has built-in speakers for music streaming, and it can connect to Bluetooth wireless speakers.

Users can view TV programs on the screen, using screen mirroring with their Samsung smart TV.

Three interior cameras capture images every time the fridge door closes — to take stock of its contents — and then send them to the user’s smartphone.

Users can check the contents through the Samsung Smart Home app.

The Samsung Family Hub refrigerator will be available in the United States in May, in counter-depth and full-depth versions. In both stainless steel and black stainless steel.

It could cost around US$5,000, according to reports, but Samsung did not comment on pricing.

The “Groceries by MasterCard” app supports the latest versions of both Android and iOS, said MasterCard spokesperson Chaiti Sen.

It lets consumers order groceries from FreshDirect and ShopRite.

“We have a strong relationship with both … and they share our vision of connecting consumers to stores in a way that is most convenient to them,” Sen told TechNewsWorld. More grocers will be added to the app as the rollout continues through this year, through MasterCard’s partnership with MyWebGrocer.

Other Partnerships in the Works?

Samsung’s arrangement with MasterCard may not be exclusive.

“Our focus is launching the Family Hub … and [we] have not made any other announcements as yet,” Samsung said.

“Looking ahead, we continuously seek and evaluate new partnerships that enable us to innovate in order to create new benefits for our stakeholders,” Sen remarked. “MasterCard may explore other joint development opportunities with other partners.”

Leaping into bed with Samsung first might have been a good strategic move, because “MasterCard wants to be first,” suggested Rob Enderle, principal analyst at the Enderle Group. “They might get a few more transactions than if they didn’t.”

With an increasing number of household devices connected to the Internet of Things, concerns about hacker attacks have been on the rise.

However, the threat “is not much worse than anybody stealing magnetic strip information from credit cards, so in terms of relative security against the credit card, it’s not that bad,” Enderle told TechNewsWorld. “Identity theft is another issue.”

All customer card and personal data will be stored in MasterCard’s secure wallet, and all card data is encrypted using the latest technologies, said MasterCard’s Sen. “Further, we have plans to tokenize the purchases made through the grocery app.”

From CES to Main Street

There will be 50 billion Internet-connected devices by 2020, Cisco has predicted.

“For MasterCard, this [Family Hub Refrigerator] launch is another important step towards our goal of bringing commerce to every device,” Sen remarked.

So, is it safe to assume that smart fridges soon will reach the mainstream?

The problem is that a refrigerator’s service life is eight to 10 years, while the high-tech hardware — chips and boards — have an 18-24-month life, Enderle noted. “The hardware will become obsolete, and people won’t want to pay extra for that.”