Research scientists in the UK have demonstrated for the first time a solid-state maser that can work at room temperature. 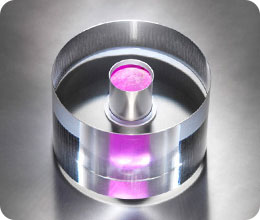 The MASER core — a sapphire ring containing a reddish pink crystal that amplifies microwaves to create a concentrated beam.

Maser is an acronym for Microwave Amplification by Stimulated Emission of Radiation. If that sounds, and reads, suspiciously like the word “laser” that’s because masers were developed before lasers, and the two amplify different parts of the electro-magnetic spectrum.

However, masers ended up being used in niche areas only, such as in atomic clocks and as electronic amplifiers in radio telescopes, because they have always required extreme conditions in order to work. These could be extremely low pressures or intense cold.

The United States Naval Observatory, which keeps standard time for the U.S., employs hydrogen masers as part of its master clock.

Now, the British researchers, from the UK National Physical Laboratory (NPL) and the Imperial College, London, have demonstrated a solid-state maser that can work at room temperature.

“At the moment, [the maser} is the size of a coffee can,” research team member Mark Oxborrow of the NPL told TechNewsWorld. “But it could be shrunk to the size of a sugar cube or even smaller by using different designs of known resonators.”

Masers work by essentially amplifying microwaves in a process known as “masing.” There are atomic beam masers, gas masers and solid-state masers.

The maser developed by the British researchers is a solid state maser, being “made of solid materials with ambient air in the gaps between the solid components,” the NPL’s Oxborrow said.

In addition to requiring special vacuum chambers and pumps to create very low pressures, traditional masers need large cooling systems as they function in temperature close to absolute zero degrees Celsius. They may also need very strong magnets to create a population inversion of the atoms in order to get them into an excited enough state to emit microwave radiation as they decay.

By getting rid of these special requirements, the British researchers have opened the door for more extensive use of masers.

Masing in a Coffee Can

The new maser demonstrated by the British researchers uses p-terphenyl, an aromatic hydrocarbon that’s used as a laser dye and an ingredient in sunscreen.

The p-terphenyl is doped with pentacene, another aromatic hydrocarbon that generates excitons, which transport energy, when it’s exposed to light.

“The pentacene molecules are dissolved into molten p-terphenyl which then solidifies upon cooling to form a solid pink crystal,” the NPL’s Oxborrow said. This crystal is placed inside a microwave cavity and then exposed to a pulse of yellow light from a dye laser.

The pentacene molecules absorb the light from the laser and go into a special excited state, Oxborrow continued. They are then stimulated into emitting microwave energy, thus strengthening the amplitude of the oscillating magnetic field.

This stimulates the emission of even more pentacene molecules. “This process runs away with itself, resulting in a high amplitude oscillation,” Oxborrow remarked.

“The choice of pentacene made it possible to operate at room temperature, because at low temperatures, the timescales would not have favored masing,” Neil Alford, head of the department of materials, Imperial College, London, told TechNewsWorld.

Masing for the Masses

Maser can be used for things like radio telescopes, military applications, and medical technologies like body scanners.

The new maser currently works only in pulses, and “we first need to get the device working continuously” before developing a prototype for eventual production, Oxborrow said.

“We have submitted proposals to [develop a prototype] … but don’t forget that from discovery to production can take quite a long time,” Alford stated.