Andy Rubin was Google’s Steve Jobs, and with him now booted off the Android product, that platform in its current form will pass. It is kind of funny to see the spin on this, which suggests this was Andy’s decision. Yeah right, and I’ll be buying that bridge in Brooklyn shortly.

While there likely were a number of reasons for this decision — from OEMs that signaled they were abandoning the Google ship because of poor treatment to what may have been the loss of an internal power struggle between Chrome OS and Android — the real reason may be that Google simply lost control of this product and needs to reset.

I’ll explore that this week and close with my product of the week, the biggest tablet you might still want to carry: Dell’s XPS 18.

The Not-So-Secret Problems With Android

The IDC report that came out last week showcased Android solidly kicking Apple’s butt in the market,but much like a report years ago on Unix that reflected Sun or IBM’s variant solely, the IDC report washorribly flawed.

Ben Bajarin over at Tech.pinions took a stab at creating a report that more accurately reflects the real world. You’ll see from the report that Google controls a small minority of the Android OSes in market on tablets, and Amazon actually has more control.

However, the biggest component is made up of Chinese tablet vendors that took Android and did whatever they wanted to it, completely separating Google from the result. Given that China kind of hates Google at the moment, it seems the company has no recourse.

For now, developers aren’t seeing much that’s different, but Google’s online services generally don’t work with products that have been separated from its control and guidelines, which means they, much like Unix, are enough different to be listed separately.

Outside of China, Google has more control over the phones, thanks to the carriers and to the fact there’s no Amazon phone, but Google’s dominance still is likely overstated, given what has happened in China.

Other problems surrounding the product are the visible defection of LG to webOS for TVs, Samsungapparently drifting to the Tizen platform, and Huawei, LG, ZTE, and Alcatel jumping to Mozilla’s. Oh, and security sucks.

Estimates currently have Android malware growing at a whopping 41 percent annually, makingthis platform almost impossible to secure — and likely one of the reasons Samsung is so pissed. This makes Google look more negligent when it comes to security than Microsoft did in the 1990s — and beating Microsoft on this score took some real work.

If this was an OS report card, Andy would have to stretch to get a “D.” It looks like Google has prettymuch lost control of its OS.

Google generally seems to operate like Microsoft did only a little over a decade later. Its treatmentof security and visible arrogance are reminiscent of Microsoft in the 1990s, and the path Google is onappears to mirror the path Microsoft took with Windows.

Rubin’s fall and replacement by the Chrome OS head appears to mirror the same thing that happenedto the head of Windows 95 when he was replaced by Jim Allchin. Much like Android, Windows washaving serious problems — and like Microsoft, Google wants its product to flow into businesses moreeasily.

While Microsoft took a couple of years to pull the plug from Windows, creating the horribly flawed Windows ME in the process, the end result was eventually Windows XP, which turned out to be sopopular, the company has had a hell of a time getting people off it.

Now Windows NT was a rewrite of OS/2 and designed from the ground up to be Unix-like and targetedmore at workstations and eventually servers. However, it was also far more secure at inception than Windows 9x ever became. Windows XP was created almost entirely to address massively emerging security issues like those being faced by Android, and Windows 8 today ties back to Windows NT far more than it does to Windows 95.

That will be the likely progression of Android, which should follow a similar path to obsolescence thatWindows 9x did. Chrome OS will be the new OS at some point going forward, as it embracessome of Android’s breadth and capabilities. Chrome OS isn’t selling well, but initially neither did NT.Chrome OS reflects Google’s view of the near-term cloud future much like NT reflected Microsoft’sview of the then client/server world.

Wrapping Up: Is Rubin a ‘Firing Steve Jobs’ Mistake?

Like him or not, Rubin is the father of Android, and of the two OSes Google has, it is by far the moresuccessful. When an executive steps out of a job without a new job announced, the move isn’tvoluntary unless the person has health problems — and that clearly is not the case here.

You boot out someone as instrumental to Android as Jobs was to the Mac, and it may be a Sculley-level historic mistake. In the end, Android will be very different and far more like Chrome OS. We’ll see if the result is successful or eventually becomes another one of Google’s many failures.

It is actually more of a portable all-in-one, but I think 18 inches is the largest you are ever likely to want to carry — at least before we start shipping bendable displays. Yes, there are 22-inch and 24-inch products in this class, but they are simply too big to take on the road and would have to remain in the home or office.

Why I think you might want to try to take the XPS 18 on the road is because, if you do worklike I do, bigger is better when it comes to screens, particularly if you are constantly messing with Webresources and social media apps at the same time. 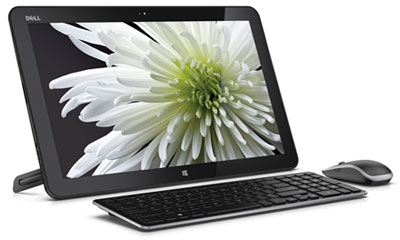 It just kills me to drop to anything smaller than 15 inches, and living on a 10-inch or 11-inch tablet, which I’ve been doing of late, is incredibly painful. But give me 18 inches and a good wireless keyboard — don’t tell anyone I use the Apple wireless keyboard with my Surface tablet — and suddenly I’m almost as productive on the road as I am in the office.

Also, with a tablet, you can actually use something in this size class on a plane, if you don’t take out thekeyboard, while a similarly sized notebook would likely need its own coach seat. Much like I thoughtthe Dell Surface 7 and Surface 5 were predictors of the future — the 7 proceeded the more successfulKindle Fire and Nexus 7, and the 5 proceeded the Samsung Galaxy S4 that folks are now eagerlyawaiting — I think the Dell XPS 18 heralds a time when we’ll likely carry a phones that are 5-plus inches and tablets that are 15-plus.

If you want to see the future, check it out — and because Dell is once again leading the way, the Dell XPS 18 is my product of the week. If you look for me on a plane now, I’m the guy with the big movie screen and getting lots of screen-size envy. Bigger is better.