Remix Could Bring Some Cinnamon Lovers Back to Ubuntu

Ubuntu Cinnamon Remix arrived just in time for the holidays. Its first stable version, released on Dec. 4, is based on Ubuntu 19.10 Eoan Ermine.

It utilizes Linux Mint’s Cinnamon desktop environment on top of Ubuntu Linux’s codebase. Work on several release candidate and beta versions stretches back to 2013. The efforts stayed under the radar until the announcement of the new distro’s debut stable release. 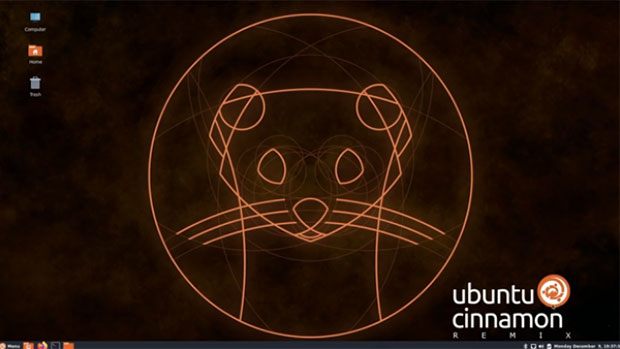 This new distro layers the Cinnamon desktop over the Ubuntu Linux 19.04 base.

As its name suggests, Cinnamon is the only desktop option. What makes this release so significant is that it supplies a missing link in the current Ubuntu Linux desktop family.

This remix release could be a welcome gift for many Cinnamon desktop users who fancy the Ubuntu Linux family. Some Ubuntu Linux users moved to other Ubuntu desktop flavors years ago, or outright fled Ubuntu Linux, when parent company Canonical adopted the now-discarded Unity desktop. In its place, Ubuntu made GNOME the flagship desktop.

For Cinnamon desktop fans, this Ubuntu Cinnamon Remix entry is welcome news. I fall into that user class. I was unhappy with lingering issues that befell recent versions of Linux Mint, but I did not want to give up on the Cinnamon desktop Linux Mint’s developers created as an alternative.

I found Feren OS to be a very reliable replacement for Linux Mint, without its issues. Feren OS is based on Linux Mint. Linux Mint itself is based on Ubuntu. A Cinnamon desktop offering based directly on Ubuntu’s newest release makes this Remix version a potential game-changer.

Ironically, Feren OS has a notice that pops up on its website alerting users to check back on Dec. 25 for an announcement on the future of the Feren OS. So it may be fortuitous to have a new Ubuntu-based Cinnamon desktop option in the mix.

Ubuntu Cinnamon Remix is an Ubuntu-branded OS released as an unofficial flavor of Ubuntu, a Gnu/Linux computer operating system. The Ubuntu branding is a bit of misdirection, though.

When loading and quitting Ubuntu Cinnamon Remix, the splash screen you’ll see is the standard Ubuntu purple screen and logo. The distro’s name is missing within menus and other internal signage.

An eye-jarring orange neon icon fills the center of a black and gold swirl screen display when the desktop loads. This is the default screen. You easily can change the screen appearance to a more comforting color or image display.

All that takes is right-clicking on the desktop (or go into system settings) to select from an ample inventory of colors and background images. Despite the inclusion of the “Ubuntu” name on the opening screen, this distro is not issued by the official Ubuntu Linux community.

The lead developer, Joshua Peisach (known by the handle “ItzSwirlz”), is an ex-developer of the now discontinued Ubuntu GNOME project, according to some reports. Some Ubuntu team members also are helping with the development.

The Remix is designed for average computer users. This project is merely a repackaging of already available components intended to be completely ready for the end-user. 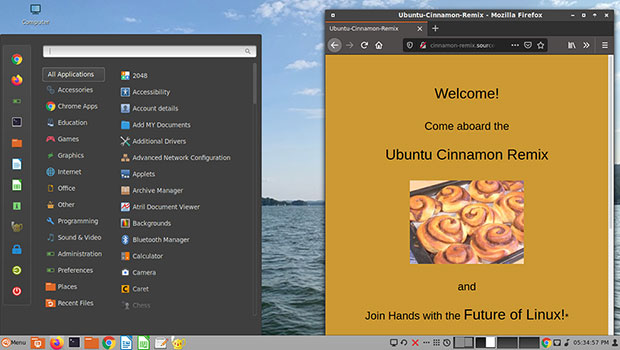 The developers kept a close eye on the features built into the Cinnamon desktop design without overwhelming new users. The default settings provide a familiar computing platform with few applets installed on the bottom panel and no screen applets activated.

This approach gives Ubuntu Cinnamon Remix a clean and uncluttered look. The same is true of its bundled applications. The installed software provides a basic assortment.

You wind up with a very functional desktop environment with basic accessories and a few productivity tools to get started. Even a few games are included.

What you do not get is a Welcome Panel that makes it easy to turn on tool sets and useful features. Conspicuous for its absence is the Firewall Configuration Tool, for instance.

GUFW, a standard Internet firewall application with its simple Firewall Configuration panel in most Linux distros, is not installed. That is a critical oversight, especially for new users who need a reminder to add the firewall security.

Ubuntu Cinnamon Remix uses the Calamares installer and features Cinnamon desktop version 4.0.10. The ISO file is available only for 64-bit computers as an isohybrid, so you can burn it to a DVD disk or to a USB stick. It supports EFI and UEFI systems.

The installation process was fairly simple. I installed it on an existing partition that contained a no-longer needed Linux distribution. The Calamares installer completed that task with just a few clicks.

I did not encounter any major problems in setting up and using this Remix release, but I did have some run-ins with some of the Cinnamon features. That surprised me because the desktop is in an advanced state of development.

The troubles seemed more the result of its integration into the Ubuntu base. For example, several of the panel applets did not work.

A key failure for me was the screenshot launcher. It refused to load even though Cinnamon reported its installation on the panel was successful. No problem, I thought. I’ll just use the screenshot tool I expected to find in the Accessories section of the main menu. It was not there. So I had to install it from the software store.

Another sign of this Remix distro’s immaturity is unresponsiveness when trying to apply some of the settings. For example, the Themes panel was next to useless. Clicking on the window borders, icons, controls, mouse pointer and desktop categories and their contents produced no effect.

The more I used this distro over the last few weeks, the more inconsistencies I spotted with displays and such.

Since I am an avid Cinnamon user, I was a bit disappointed in the performance of this initial stable release. The critical stuff worked fine. The Ubuntu base is very forgiving. What did not work was an annoying list of small stuff. I am a lot less forgiving of those glitches.

I am sympathetic to the challenges a small developer team faces in swapping a heavyweight desktop design the likes of Cinnamon into a powerhouse operating system such as Ubuntu. Given that it has come this far in the last five years or so, I hope it will be a short time before the next stable remix release is ready.

Planned improvements for the 20.04 release include a new GRUB, a Plymouth theme, an improved layout application, and a Welcome screen. Also planned is a slideshow presentation during installation.

I want to see a better installed base of applications that rises to the volume of what Ubuntu now offers in its desktop offerings. I am not in favor of application bloat, but I think the current installed software inventory is far too minimal.

I look forward to seeing the Cinnamon desktop spice up Ubuntu as an official competitive desktop option. Hopefully, this new remix distro will improve and become part of the official Ubuntu Linux lineup. I can not help but wonder why Canonical has not already done this, without waiting for a third-party distro to join the Ubuntu spice rack.

*ECT News Network editor’s note – Dec. 20, 2019: Our original published version of this column incorrectly displayed a 5-star rating for Ubuntu Cinnamon Remix, although Jack Germain actually gave this debut version of the distro a 4-star rating. The mistake occurred in the editorial department and does not reflect any change in Jack’s assessment. We apologize for the error.