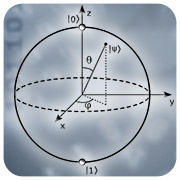 It should come as no surprise, of course, that something called “quantum computers” would be tricky to talk about. The inner workings of computers are plenty complex to begin with. When melded with a dizzying branch of physics — quantum mechanics, which dissects the world of atomic and sub-atomic movement — the result is bound to defy simplistic explanations.

For the laymen among us, quantum technology is so daunting that simply asking someone to explain it can be complicated. I learned, for instance, that sending an interview request to a quantum physicist is liable to come back thus: “Please try me anytime next week if you’re happy with a non-unit probability of successfully getting through.”

But even if quantum computers require an expanded vocabulary and understanding of mind-bending science, their impact moving forward figures to be incalculable. (Incalculable here is used literally.) Researchers, engineers and, importantly, investors have dived in headlong at companies like D Wave, and at universities from California to Denmark. What’s more, companies like Nokia and Lockheed Martin have begun to meld quantum technology into their operations, thus proving that the steady migration from labs to commercial industry is under way.

Indeed, quantum computers are not some sci-fi theory residing only in the future. They’re part of the here and now, and they will be ever more so over the coming years — even if many of those who stand to gain have a non-unit probability of understanding exactly how they work.

“Our heads have evolved over the millennia to deal with things we can understand,” said quantum researcher Jeremy O’Brian, who is a professor of physics and electrical engineering at Bristol University.

“Quantum physics would be absolutely obvious to us if we traveled the speed of light or moved like electrons,” he told TechNewsWorld. “All of this stuff would make sense and we could totally get our heads around this. But it’s just not how we’ve evolved. We evolved to understand regular physics, so this stuff can seem bizarre.”

As such, it may be best to start with something else that once seemed entirely bizarre: the laser.