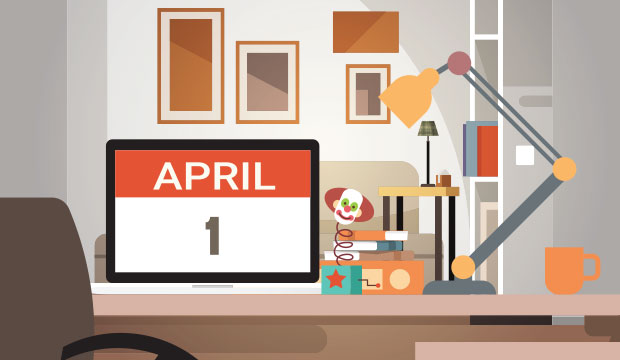 The Internet is a minefield on April 1, with tech companies getting in on the April Fools’ act in weird, wonderful and often woeful ways. The line between a successful prank and one that leaves users sighing, or worse, is micron-thin, and the boost to one’s reputation — or knock on it — can hang around for some time.

This year, we’ve rounded up some of the worst April Fools’ pranks unleashed on a tech-savvy audience in recent memory.

Last year, Google added a new button to Gmail that could append an animated GIF to an outgoing message. It depicted a Minion character dropping a microphone to signal the classic boast, “I’m out of this conversation — nothing you can say will be better than what I just wrote.”

Unfortunately, Google placed the “Send with GIF” button right next to the regular “Send” button, causing all manner of social faux pas. Worse, the feature prevented the sender from seeing any subsequent replies.

The Internet went a little crazy with reports suggesting that “Send with GIF” accidents had cost people jobs and friends — or at least damaged relationships. Google disabled the tool before the end of the day and apologized.

While it was a cute idea and surely raised a few smiles, the execution definitely could have used a little more finesse.

Google’s high volume of foolery each year means that it’s bound to have plenty of appearances on any list of the worst Internet April Fools’ pranks, and hey, look at that, here’s another. In 2013, Google and Bing decided to poke some fun at each other.

Google offered a tool called “Gmail Blue,” apparently the result of a challenge to “completely redesign and recreate something, while keeping it exactly the same.” It essentially gave Gmail a bluer theme instead of the default red look. This was Google’s way of throwing shade at Microsoft, which at the time was working on a project called “Windows Blue” — a redesign of Windows 8’s metro mode with some new features.

At the same time, Microsoft offered a different version of its Bing search engine, taking aim at the most well-known place on the Internet: the Google homepage. When users entered “Google” into Bing’s search field, they were rewarded with a sparse white page sporting a colorful Bing logo and an “I’m Feeling Confused” button, a riff on Google’s “I’m Feeling Lucky” option.

Microsoft aimed a couple more direct barbs at Google, along the lines of this tooltip: “With so many delicious flavors available, most people still choose vanilla.” Microsoft also suggested the aim of the prank page was “to learn more about how our world would look if we hadn’t evolved.”

Relatively inoffensive, sure, but the missives from both sides seemed somewhat petty and didn’t make either company look good. One wonders what interesting new feature might have popped up had the engineers working on each “prank” decided to work on something actually productive or funny.

Speaking of Microsoft and 2013 April Fools pranks, the company allowed an Instagram app logo to sneak into its Windows Phone app store — but, haha, there was no app to download. It was a mean-spirited, ill-conceived joke, as many Windows Phone owners had been desperate for an Instagram app.

It’s likely that an independent developer carried out the prank, but I can’t imagine why Microsoft wouldn’t have vetted an app with that particular name, given that the joke only served to annoy its users.

As much as I love and cherish Twitter, I don’t think I’ll ever forgive it for teasing a new premium product that might have brought about an end to the English language as we know it.

It suggested that everyone could still use Twitter as a basic service, but only its new premium version would display vowels — you’d have to shell out some cash to see complete tweets. It’s an obvious nod to the company’s original name, Twttr, and in all honesty, not a terrible joke.

But, my word, would I have subscribed to that premium account in a heartbeat. I am all for people expressing themselves however they need to, but I’d urge them to do so with a semblance of grammar and proper spelling.

A Twitter without vowels would be a nightmare. Twitter might be onto something with this subscription idea, though. I’d happily hand Twitter money every month if it helped get rid of all the trolls and reprobates.

It is, on the surface, a pair of silly ideas welded together in a way that makes sense for our modern world. However, it seems a little shortsighted given the concerns many have about inappropriate advances from drivers in the best of times, let alone when a c