Ejected from Oracle’s Open World. An impromptu gathering at a nearby restaurant. Fulsome explanations from PR flacks and tweets galore. The relations between Oracle CEO Larry Ellison and Salesforce.com chief Marc Benioff went from wary and grudging mutual admiration, to red hot rhetoric. How red hot? Well, for starters, Ellison referred to Salesforce.com as the “roach motel” of cloud services this week.

Not that Benioff made out badly. He was reportedly willing to pay US$1 million for the chance to deliver the OpenWorld keynote. He’ll get that back — plus all the free publicity he could ask for.

The two sides appear more than eager to give their spin on the keynote kerfuffle to any and all who will listen — although neither company was able to produce a spokesperson to talk to the E-Commerce Times about its cloud computing services for this story.

Which is, after all, what the whole circus was really about: Oracle is encroaching on Salesforce.com’s turf with its own public cloud service. Competition is seriously ramping up.

“It is important to recognize that Oracle Public Cloud is still very early — and like any version 1.0 product, there is reason for customers to be cautious, Nucleus Research Vice President Rebecca Wettemann told the E-Commerce Times.

“However, the real winners are customers that now have more choices,” she said.

A Look at Public Cloud

Oracle Public Cloud, as described by Ellison, provides customers access to Oracle Fusion Applications, Oracle Fusion Middleware and Oracle Database, all of which are managed, hosted and supported by Oracle.

The Drawbacks of Multitenancy

It is positioned as the answer for customers that do not like the drawbacks of multitenant Software as a Service applications.

“Virtualization is an effective approach — one that Oracle is good at — and Oracle is clearly taking advantage of that,” said Wettemann.

Salesforce.com, for its part, put a stake in the ground years ago with its firm belief in the value of multitenancy, although lately it has relaxed its stance. Earlier this year, it announced a new Database.com Data Residency option that lets companies keep readable versions of data on premises.

Other considerations that prospective users should factor in are the advantages and disadvantages of using a Java-based system versus a proprietary one, said Wettemann, and whether a company will need the myriad business applications Oracle has available.

Whether the system is Java-based or proprietary, in particular, will be an important distinction for a lot of customers, she said. “Certainly it raises questions about vendor lock-in.”

Oracle is also pushing its hybrid approach to computing — that is, the ability to move users and workloads from the enterprise to the cloud and back seamlessly, noted Muneer Taskar, head of Persistent’s cloud computing practice.

“This is ideal for customers that want to either test out the cloud or want to use the cloud in a limited manner,” he told the E-Commerce Times.

However, only a small subset of users would be interested in this functionality, Wettemann pointed out.

Who’s the Most Reliable?

Both vendors promise reliability, but this is a no-contest question, according to Taskar. “It is too early in the game to be able to speak to Oracle’s reliability, whereas Salesforce is a proven platform — multiple times over.”

Then there is the matter of a CRM-focused approach versus an ERP, database-oriented one.

“When [you] look at Oracle, you have hundreds of different modules for all areas of the business. Salesforce.com is more CRM and custom-app focused,” Wettemann observed.

Here Oracle is the hands-down winner, said Taskar — that is, if you want an Oracle DB and allied enterprise services in the cloud.

“That makes sense for enterprises that already have Oracle products installed. Salesforce has focused on the social enterprise and has the framework built in for feeds, sharing, collaboration and APIs to enable consumption via external app. Oracle has yet to elaborate on social networking support.”

Basically, Oracle and Salesforce are heading to the same destination, Taskar concluded, but they are coming from opposite directions — with completely different features to boot.

“Salesforce.com has been wildly successful with its flagship CRM product,” he said. “With that success it is safe to say that they understand the cloud, and particularly SaaS, better than anyone else. This is Salesforce.com’s edge. What remains to be seen is whether they can capitalize on this edge and replicate the success they have had in CRM as enterprises move other pieces of their IT pie to the cloud.”

Oracle, on the other hand, is taking its success in enterprise IT — and in some cases, complete dominance — and trying to replicate it in the cloud, continued Taskar.

“The technology Oracle is moving to the cloud is already proven,” he maintained, “and more importantly, widely entrenched. Not having to learn, or do, anything new or proprietary is a powerful pro in enterprise IT decision making, and this will work in Oracle’s favor.” 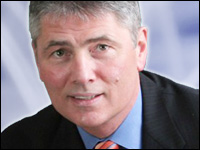 What to Make of Database.com?