If you think about it, Apple and Microsoft have kind of switched places with their recent operating system refreshes. Microsoft, which is dominant with PCs but anything but on tablets and smartphones, is leveraging its smartphone platform heavily to create a new PC product. Apple, which is a small player with PCs but massively dominant with smartphones and tablets, is keeping the two technologies at arm’s length. Microsoft’s latest OS is a smartphone-like product, although it is weakest with smartphones. Apple’s is a PC-like product, although it is weakest in that space.

This evens the playing field in both directions, but initial observations suggest that Microsoft is winning and may, if things continue this way, slam-dunk Apple. However, Apple has not really begun to fight, and Microsoft has a tendency to snatch defeat from the jaws of victory, so this is far from over. I’ll shine a spotlight on OS X Mountain Lion/iOS vs. Windows 8 this week.

I’ll close with my product of the week: an interesting 7-inch tablet from Samsung that gives the iPad a run for its money.

I’ll start by reviewing the strengths and weaknesses of both vendors, which have near-equal massive cash reserves. Microsoft is still dominant in the PC and server space and has deeper relationships with business buyers going into this fight. It pulls greater margins from its products, historically, and owns a diverse revenue stream that is now heavily based on an annuity model (basically, subscriptions) from business buyers.

Microsoft also has a tendency to fund based on what it wants to spend — not on what success costs. This means it tragically underfunds and underresources most of its efforts and, compared to Apple, often appears unfocused and unable to concentrate the resources it has on a single initiative. The last real company-wide initiative was .Net, and it was driven by Bill Gates who is no longer active in the company.

It remains the only vendor that people line up for, and it is currently driving the tablet/smartphone wave, though Google is beginning to mount a challenge for part of this leadership. Apple remains the most-focused vendor in its class.

Apple just lost its founder who, among other things, was both the face and key pitchman for its products. It seems to be unable/unwilling to fully backfill him, and this weakens, perhaps significantly, its ability to ensure a positive image over its new products.

In addition, the market is clearly in transition, and even though Apple leads it in both tablets and smartphones, smartphones are likely the more sustaining of the two platforms, and that’s where its leadership is the weakest.

At this phase, both OS X Mountain Lion and Windows 8 are in beta phase, which means they are largely feature-complete but being tested for problems. Apple took the more conservative path, incorporating some features from iOS but not yet merging the code base.

Microsoft’s approach is far more blended. Windows 8 is effectively a hybrid of its mobile and desktop platforms and comes closer to providing a consistent experience across all of its client products. Because few have ever used a current-generation Microsoft phone and many iPhone users don’t use a Mac, both user groups are subject to some disruption.

By taking each other’s ideal path, Microsoft is placing its PC market at high risk, and Apple is jeopardizing its smartphone and tablet dominance.

Microsoft Is Winning (So Far)

Based on reviews of both products over the last several days (here is one from traditional Apple fan David Pogue, and here is a contrasting Mountain Lion review), it appears that Windows 8 is largely getting glowing reviews and Mountain Lion is getting pounded for specific problems and a general lack of innovation.

I think this is the result of three things: Microsoft is massively funding its Windows 8 effort; the change to a more-mobile platform is more overdue for Windows; and Apple has yet to replace Steve Jobs as spokesman.

In short, Microsoft has filled the airwaves with the advantages of Windows 8, but without Jobs, Apple has effectively lost its voice. Since Mountain Lion isn’t that close to iOS, it is being pounded both for lack of change and for dissatisfaction with the changes it does make.

This reminds me a lot of Apple in the 90s. It built cool stuff, but it increasingly couldn’t get people to see how cool it was. Without Jobs, it simply didn’t have the ability to properly pitch its differences as advantages. Apple had lost the magic and had no idea how to replace it until it bought NeXT and brought Jobs back. I’m pretty sure he isn’t coming back this time, though with Steve, I’m not sure even death is certain.

Wrapping Up: Far From Over

Microsoft does have a tendency to cut funding at critical times and snatch defeat from the jaws of victory and Apple could still discover how to replace Jobs as pitchman. The first is historically likely — the latter not so much. This is what makes this a horse race.

If Microsoft can keep up its momentum, or if Apple can recognize its critical loss and find a way to fill the void, either could end the year with a decisive victory over the other in its core markets.

Of course, Google is a wild card, but given that it generally funds below Microsoft and is currently playing privacy chicken with regulators, I’m expecting it will likely be taken out of the race by one of the governments it has enjoyed pissing off before year end.

Strangely enough, that means success or failure is largely in the control of all three firms, for once, which should make this fight particularly interesting to watch. The outcome is still uncertain and likely will remain so until year end.

Now the tablet Samsung sent me is the Samsung 7, and it isn’t that great. However, based on what I know of the new Samsung 7.7, it could be a knockout. 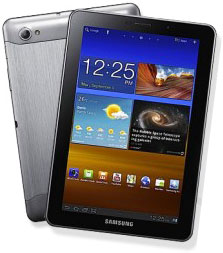 The old 7 is thin, light and very sexy, and it is well priced at less than US$300, but where you think it would shine — as an e-book reader — it doesn’t. The display just isn’t up to the task (not enough contrast). Even though the product is otherwise impressive, missing on this critical feature makes it unacceptable.

The new 7.7, however, comes with a Super AMOLED display. This immediately turns the tablet’s weakness into a strength, because AOMLEDs combine the contrast of plasma with the brightness of LEDs. The result should be better than the Kindle Fire and vastly better than the old Samsung. In addition, it gets the newer Android OS and a faster processor, which should make it snappier.

It’s thinner than a Kindle Fire, offers five hours more battery life (up to 12 hours in test), and sports features like both front- and back-facing cameras. Currently, this product can only be had with warranty at Verizon for about $500 + a two year LTE (4G) contract. (Verizon data plans typically cost between $20 and $80 per month.) You can get it on the gray market — there’s a WiFi-only version on Amazon for $660 — but most of the other gray market providers are out of stock. Still, this is pricey, no matter how you look at it.

You often pay more for the best, though, and the reviews on the Amazon site suggest the buyers got a good value, even at this very high price. In the end, it is great to see a vendor break from the pack and do something different that is also outstanding. That is why the Samsung Galaxy Tab 7.7 is my product of the week.