Obama vs. Romney: An MBA’s View

I’ve been watching the battle for the White House with some trepidation, largely because I believe that given how dysfunctional Congress is, even a god would be ineffective as president.

I voted for and have largely been disappointed in Obama who has so far repeated most of Jimmy Carter’s mistakes. I haven’t yet been a supporter of Romney, who appears to me to be a rich guy who wants to buy the presidency. However, a recent piece in Slate by Jacob Weisberg showcasing Romney’s problem with Bain actually made the guy more attractive to me.

You see, to drive change you either have to change the system — something Obama and many others havefailed at doing — or you figure out how to game it. That’s pretty much what Ronald Reagan did, and whileyou might not like what Bain does, it was created to game this same system, and it has been successfuldoing just that. This suggests Romney, who created Bain, might actually have the necessary skills.

Now that could actually be scary if you don’t like what he plans to do, but I’m a believer of putting folksin jobs who can do them. Planned incompetence just doesn’t seem to be working for us.

I’ll close with my product of the week: a US$6,500 laptop that will crushthe competition and make you wish you lived in an alternative universe.

If the country were a company, GNP would be revenue and taxes would be intercompany billing fundingsecurity, IT, operations and executive salaries. If Obama or any president were truly the leader of U.S.Corp., he would focus far more at growing the country’s revenue and far less on increasing fundingfor core services.

Put a different way, had Steve Jobs performed as most U.S. presidents have in recent years,he would have ignored selling Apple products and instead worked to pay security, ops and executive staffmore, and increase employee benefits.

The end result would have been a dead company within monthsof his being put back in charge. In fact, looking back at some of the things his immediatepredecessor Gil Amelio did, I think Gil could have been a U.S. president, which is why he was fired.

In short, our presidents mostly — at least in recent years — seem to focus on creative ways to spend moneyand taxes rather than focusing on making the country more profitable. Ironically, if you make the countrymore profitable, tax revenues go up automatically as a percentage. Folks buy more and pay moresales taxes; they earn more and pay more income taxes; and since they are more likely to be employedand happier, they also are more likely to reelect their politicians.

Even the Republicans tend to focus more on costs, security and taxes than on growing revenues, and thelast two presidents — one from each party — seemed to be in competition to see which could spend themost on things we couldn’t afford, such as wars and expensive healthcare.

Now I’m not only an MBA, but also an ex-auditor, and I was at one time part of the IBM ExecutiveResource Program which was supposed to train folks to be smart managers. It must be effective,because IBM is one of a small handful of companies that has lasted for 100 years.

However, if you were to put in place any CEO that behaved as most presidents do, their companies would fold so fast theiremployees might not even see a second check.

Where Carter and Obama differ is that Carter tried to bootstrap the solar industry, and his inability toget reelected killed it. Obama has apparently killed the solar industry trying to help it, and this goes tomy point on executive competence.

Even if you look at his health plan, the right way to have done it would have been to first address what apparentlywas a massive inequity in health costs and then create — using your own experts — a program that was bothfiscally responsible and effective.

Obama just appeared to jump over the whole healthcare cost thing, andthen he tossed the concept over to Nancy Pelosi to finish. He’d been in Congress and should have knownit to be dysfunctional. The result was a disaster politically. It isn’t that the idea was bad, as theRepublicans claim. The idea was a good one — it was that the execution was horrid.

In short, while Obama clearly has a good heart, he hasn’t proven competent in either preserving U.S.revenues or in executing major programs. If he were a CEO, we’d fire him.

Over the years, in business and in politics, we’ve seen with CEOs for companies like HP and Yahoo thereis always a chance that the new person can actually make things worse. Here in California, we triedthe actor thing again with Arnold Schwarzenegger, and that didn’t exactly work out as well as it did thefirst time. Though, to be fair, we were likely screwed whoever got the job, due to how much of the housingcrisis ended up in this state.

But to be an effective president — and I think we saw this in both Clinton and Reagan — you have to be ableto learn to game the system. You can’t just complain about Congress and come up with reasons whyyou failed; you have to succeed. In the end, no one wants to hear excuses — they want touchdowns. Inpolitics, that means you have to kiss babies and butts. You also have to be able to make deals and keepyour eye on the goal.

Bain, with all its faults, is a company that figured out under Romney how to game the tax system to thebenefit of its executives and investors — both of which appear to have been pretty happy with the result.Given that we are, in effect, the investors in the U.S. as well as the line employees who drive the real nationalprofits, I think that makes Romney potentially more qualified.

Frankly, I’m not convinced that any president can fix the mess we are in, and there is a lot to be said forsomeone who already has four years of actual experience. However, against the expectations he set, Obamahas fallen far short, and largely because he wasn’t able to work with either a Democratic or RepublicanCongress.

Now if you don’t like what someone is planning to do, you’ll prefer they be ineffective, which suggests that as a voter you need to look at both goals and effectiveness. However, as a member of U.S. Corp., I’d like to see a practice of putting people who can execute into office. Then there is at least a chance they will meet someone’s — other than their mother’s — expectations.

His experience at Bain suggests Romney is competent in business, but the way he is defending hisrecord suggests he isn’t yet competent in politics — and to be successful, he’ll need to learn both. So inthe end, this is simply intended to get you to look at the race differently and to question the key pointsboth sides argue, so perhaps we’ll make a better selection this time.

This round, I think only one thing matters: Which will be most effective at improving the nationaleconomy? That will raise all boats — the rest is noise. Or, put a different way, Greece is what happenswhen you focus too much on benefits and not enough on true revenues. I don’t want to live in anotherGreece, and I doubt you do either.

Product of the Week: The Datamancer $6,850 Victorian Laptop

Especially when you look at the political situation here in this country, it isn’t hard to imagine living inan age when excitement is a bit more magical and bit less like watching the Three Stooges run yourcountry.

Few products capture this kind of concept like the ones made by Datamancer. I have boththeir keyboard and monitor and, while clearly expensive, they provide a visual and tactile pleasure thatis hard to duplicate.

Their latest creation is the Victorian Laptop, which has apparently sold out it hasbeen so popular, and I think it points to a market unmet even by Apple’s offerings for more of a classicRolls Royce product in an alternative universe form. 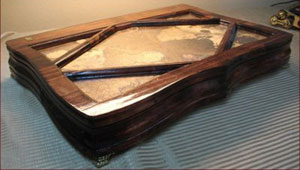 The chassis is natural rich solid wood, nicely finished, with engraved brass keys, semi-precious gemlights, and a top that is made from a gold foil map. You’d think it would be steam powered, but insteadit has Intel Core i7 inside, Nvidia GeForce GT 555M graphics, 8 gigs of Ram, a 17-inch 1920×1080 screen,and a DVD drive. But you always touch wood, brass or leather.

Clearly these laptops aren’t for everyone. However, if you have the money and want a PC that captures the imagination, that you would likely leave in the office or at home — it’s really more of a folding all-in-one — then the Datamancer Victorian Laptop is for you, and it is also my product of the week.