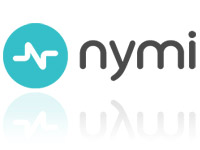 Bionym on Tuesday unveiled the Nymi, a wristband designed to replace the need for passwords and locks by using individuals’ unique heartbeats to authenticate a range of devices.

To activate the Nymi, a user simply touches an embedded biosensor sitting atop the thin wristband. The touch generates the user’s unique electrocardiogram reading for authentication. The Nymi then transmits that data via Bluetooth to a corresponding registered device (usually a smartphone).

Once a user is authenticated, the Nymi automatically unlocks electronics including computers, smartphones and tablets when the owner comes into contact with them. Once they are out of physical range of the Nymi, they lock again.

The Nymi is also able to detect gestures. With the flick of a wrist, for instance, it could unlock a car door. Bionym is urging third-party developers to work with its open source API to expand the Nymi’s functionality.

The Nymi is designed to adjust for the normal variations in a person’s heart rate throughout the day. Users can also register an ECG sample when their heart rate is elevated — during exercise, for instance — so that the device will recognize an individual’s unique elevated read in the future.

The Nymi wristband will function properly even if a user should experience a long-term change in heart activity, said Karl Martin, president and CEO of Bionym. That’s because the device picks up on the parts of the ECG reading that remain the same, no matter what kind of activity or trauma the heart is experiencing.

“There are aspects of the ECG that are consistent over time and unique to a person,” Martin told TechNewsWorld. “We are using this to enable our recognition system.”

The company has worked with the University of Toronto to test more than 1,000 subjects, some of them for more than four years. Bionym plans to launch more scientific data about the tests this fall.

The Nymi wristband is available for pre-order for US$79. Bionym said the device will be shipped in 2014.

Convenience is the Nymi’s most compelling feature, Martin said.

“If you compare this to putting biometric sensors directly into devices — for example, a fingerprint reader in an iPhone — those systems still require a user to take an action every time they want to use their identity,” he noted. “In our case, the user can forget about the fact that they’re wearing the Nymi, and live a life of convenience.”

Smart devices are about more than just convenience, though, noted Ross Rubin, principal analyst at Reticle Research. For a wearable device to succeed in the market, it must also have practical applications — and with hacks and cyberattacks on the rise, any device that can increase security is bound to get attention.

“This is an intersection of a few emerging trends, one of which is the idea of monitoring different bodily vital signs and the other is taking a new approach to providing access,” he told TechNewsWorld. “We’re going to see a number of industry-wide efforts to get us beyond passwords and replace them with biosensor inputs to make them more secure.”

The Nymi is one of many wearable tech items breaking into the consumer device space, said Rubin. Right now, many of those products serve relatively specific purposes. The Nymi helps to eliminate the need for passwords; the wearable Fitbit wristband measures fitness goals and daily physical activity.

Eventually, there will likely be a smart wearable device that combines several elements, Rubin suggested. The idea behind the Nymi is thus smart and practical enough to find its way to a wearable device in the future, even if the Nymi doesn’t end up being next year’s hottest accessory.

“There is limited real estate on the body,” Rubin pointed out. “We’ve seen different classes of wearable devices for monitoring and for output, and over time, we’ll see more of those functions in the same device. Cost and battery life are two of the main factors preventing that, but we continue to make progress and this idea is something that we’ll see a lot more of in the future.”