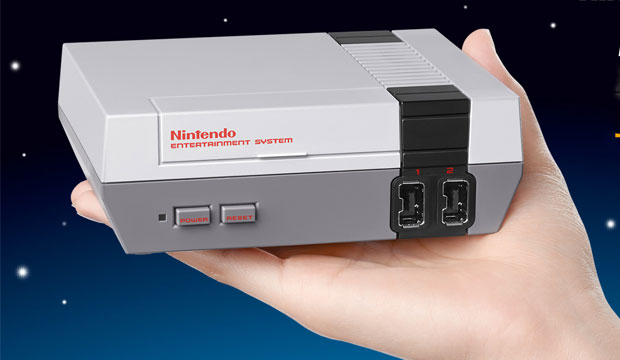 Nintendo on Thursday unveiled its latest gaming console: the NES Classic Edition, a mini replica of the original home console that can connect directly to a TV via an HDMI cable.

The system features 30 built-in games from the 8-bit era, including fan favorites such as Super Mario Bros., The Legend of Zelda, Metroid, Donkey Kong, PAC-MAN and Kirby’s Adventure.

“We wanted to give fans of all ages the opportunity to revisit Nintendo’s original system and rediscover why they fell in love with Nintendo in the first place,” said Reggie Fils-Aime, president of Nintendo of America.

“The Nintendo Entertainment System: NES Classic Edition is ideal for anyone who remembers playing the NES, or who wants to pass on those nostalgic memories to the next generation of gamers,” he added.

The system, which will be available this fall for US$59.99, will ship with a newly designed NES Classic Controller patterned after the original NES controller. It will include an HDMI cable and an AC adapter.

Blast From the Past

The NES Classic Edition is not the first all-in-one gaming machine throwback. The Atari Flashback, which recreates the Atari 2600 and Atari 7800 systems, comes with the original classic games from their respective eras. Colecovision and Intellivision also have gotten the blast-from-the-past treatment.

“Many NES games are definitely within this category, and Nintendo has already made this aspect of its catalog open to gamers on several generations of hardware, such as the Wii and Wii U,” he told TechNewsWorld.

“It is actually surprising that Nintendo took so long to do this,” added independent video game industry analyst Billy Pidgeon.

“This is going to appeal to that same target that played the system back in the day — plus all things 8-bit are kind of hot right now,” he told TechNewsWorld.

Staying True to the Classics

The quality of the execution could play a big role in determining the new NES’ success.

“One requirement for such games is that their replication has to be spot-on,” added IHS’ Bailey. “If there’s any sloppiness, the target audience will feel short-changed. Given Nintendo’s track record, we’d expect flawless renditions of the games to appear on the NES Classic Edition.”

That’s not to say changes can’t be made. One improvement, for example, is that instead of saved game cartridges, the titles have been reworked to allow for multiple suspend points, which will allow gamers to start where they left off with no password needed.

“This addresses one of the big problems with 8-bit, in that games had that password you had to enter,” noted Pidgeon.

“This makes it easier to play, so you don’t have to start from the beginning,” he explained. “The hardcore purists may not like it, but some of us have other things to do than continually start over 8-bit games.”

Competing With the New

One major difference that could set the NES apart from other retro systems lies in the longevity of the games themselves. Other flashback systems revive games that largely were obsolete unless one had an old system collecting dust in the closet. Nintendo games have not been more enduring.

“Those other systems came about because there was no virtual console,” suggested freelance game reviewer and industry consultant Paul Semel.

“There have been compilation releases, such as the Midway Collection, but Nintendo games have been playable in other ways,” he told TechNewsWorld.

“Of course, you have to wonder how much replay value gamers will get from it, since it will compete with a slew of contemporary games,” pondered Joost van Dreunen, principal analyst at Super Data Research.

“It looks like it will be an ideal gift idea for the holiday season, but I don’t see it take up significant market share in the larger games market,” he told TechNewsWorld.

However, “these things are for different market,” noted Semel. “These retro consoles are for those older gamers that may want to play their older game without investing in the latest hardware.”

Connecting With the New

For those gamers who do keep pace with the new while wanting that blast from the past, the NES Classic Edition also can be paired with a Wii remote to play Virtual NES Console games via a Wii or Wii U.

“This plugs into a Wii remote, allowing the joypad to be played with NES games on the Wii and Wii U,” he added. “This allows people to play their existing NES game collections with an authentic input device, which, for some people, will be an appealing bonus that adds to the purity of the experience.”