Nintendo Unveils Labo, a DIY Cardboard Kit for the Switch 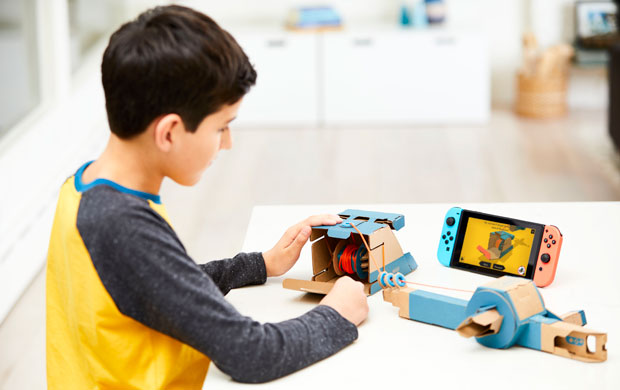 Nintendo, riding high off of record-shattering sales of its Switch gaming console, on Wednesday announced an out-of-the-box addition to the family, Nintendo Labo. With its Toy-Con creations, Labo could rewrite the script on the way gaming companies expand their audience to the children’s market.

A 13-key cardboard piano becomes a functioning instrument once the Switch console and the right Joy Con controller are inserted into the instrument. When the keys are pressed, an IR Motion Camera converts them into notes that are played through the console.

Users can make cardboard motorbike handlebars and then insert the Joy-Con into each side and the Nintendo Switch in the middle. After hitting the ignition button on the bike, they can start the accelerator using the “bike’s” right handle.

Labo is an “amazing evolution” of the Switch platform that will “inspire curiosity, creativity and imagination” in people of all ages, said Reggie Fils-Aime, president of Nintendo of America.

The Nintendo Switch has been riding a wave of popularity. It set a new record with 4.8 million unit sales in its first 10 months, becoming the fastest-selling home console in U.S. history, according to data from NPD Group. The console sold more than 1.5 million units in December, the most of any video game system.

Nintendo Labo will launch officially on April 20. Besides the Variety Kit, the company will offer a Robot Kit: An interactive cardboard robot, with a visor, backpack and straps for the hands and feet, allows users to take control of a large in-game robot.

Both the Variety Kit and Robot Kit will contain relevant Nintendo Switch software. The Variety Kit will retail for US$69.99 and the Robot Kit for $79.99. The Switch console is sold separately.

A special customization set that includes stencils, stickers and colored tape will retail for $9.99.

The company will host Nintendo Labo Studios in New York on Feb. 2-3 and in San Francisco on March 2-4, for kids aged 6-12 and their parents.

Nintendo truly has surprised many in the gaming industry with the Labo announcement, said Mat Pistcatella, industry analyst for U.S. games at NPD.

“It’s an amazing concept,” he told TechNewsWorld, “and I can’t think of anything since the original reveal of the Nintendo Wii that made me sit back and just say “wow.”

Nintendo Labo is designed to increase engagement and keep the Switch in the hearts and minds of users, many of whom are kids, said Rob Enderle, principal analyst at the Enderle Group.

“This is a historic problem with Nintendo’s recent efforts like the Wii,” he told TechNewsWorld. “They get a ton of initial traction and then interest wanes.”

The prospects for Nintendo Labo are a bit limited because it is so sharply aimed at the younger set, suggested Karol Severin, an analyst at Midia Research.

“Nintendo is trying to capitalize on the popular Switch release by launching add-ons, which utilize and showcase the console’s capabilities and expand on user experience,” he told TechNewsWorld.

There is no silver bullet that would appeal to a broader market in the same way Labo addresses children, Severin acknowledged. However, the company may need to expand its add-on strategy to appeal to nostalgia players or hardcore gamers as well.