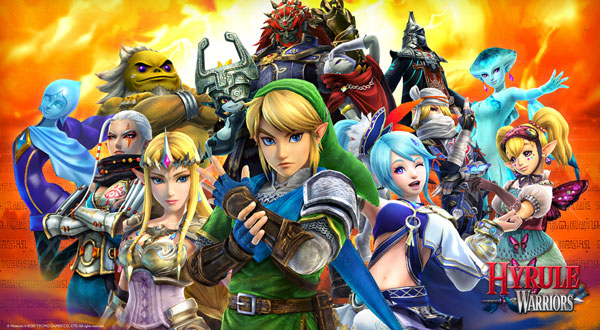 Nintendo’s Hyrule Warriors, which was released in Japan last month and will arrive in North America on Sept. 26, is a very different kind of game.

Nintendo called in help from two outside studios: Team Ninja, developers of the Dead or Alive series and Ninja Gaiden; and Omega Force, the creators of Dynasty Warriors.

The result is a game that looks a lot like The Legend of Zelda, but the game play goes in a very different direction.

Hero Link once again is called to save the realm, but rather than featuring the traditional puzzle-solving and exploration elements in a long and winding adventure, Hyrule Warriors thrusts players into hack-and-slash action.

The change in game play could change Nintendo’s fortunes. Its franchises long have followed a familiar — if not exactly predictable — pattern that typically involves the signature character fighting evil through exploration rather than the use of brute force. This approach hasn’t fared well since the release of the Wii U nearly two years ago, and on the business side of things even Mario has been unable to truly save the day for the company.

This time, Link is drawing his sword to try something different.

Messing With a Legend?

Hyrule Warriors begins much like a typical Zelda game, with Princess Zelda calling upon the Hero of Time to stop a new evil. Instead of doing more of the same, though, Link goes straight for the stick, and action ensues as the various heroes from the land of Hyrule fight increasingly stronger enemies and more challenging threats.

It isn’t clear whether this brute force approach utilizing Nintendo characters will be embraced by gamers. The early reviews have been somewhat mixed. Some reviewers have been critical of the repetitive game play and underdeveloped story.

“Hyrule Warriors is a mashup collaboration of The Legend of Zelda and Dynasty Warriors games, and while Nintendo is trying to create something unique for the Wii U, it seems to fall short for Zelda fans,” said Wanda Meloni, senior analyst at M2 Research.

“The Zelda franchise is one of Nintendo’s strongest brands, and they are looking to breathe new life into it to keep gamers engaged on the Nintendo platforms,” she told TechNewsWorld.

However, others see the game as a fresh break from the ordinary, even if its storytelling isn’t entirely revolutionary.

“It was impressive,” said Susan Schreiner, analyst for C4 Trends, after seeing a preview.

Gamers may take to Link’s more direct approach — especially as it offers elements from another hit series.

“Given that it is a mashup of two strong Nintendo franchises, we are projecting that gamers will actually be receptive,” Schreiner told TechNewsWorld, “particularly since Nintendo is making this even more interactive — with content being added, expanded adventures, and a few free downloads at launch. Gamers will receive access to a new free mode, free new weapons, and a free set of alternate in-game costumes for Link and Zelda.”

A New Link for Nintendo

Side-project styled games that are barely related to the official time line of the in-game universe are common, as they draw new players to a franchise. This changeup for Nintendo also could be a way for the company to show that it can branch out — notably with its signature characters — rather than just deliver more of the same.

All of Nintendo’s fortunes are not tied to this one title, of course. Hyrule Warriors is just one of several upcoming releases that could draw addition to the Wii U’s potential.

“Collectively, Nintendo has a strong lineup for this quarter — and in time for the holiday season,” said Schreiner. “This title has the potential for giving gamers a reason to stick with Nintendo and their long-time Nintendo favorites.”

Will it draw enough new gamers to the system? While it shows that the company can take chances, does Hyrule Warriors go far enough?

“Unfortunately, the company does not seem to be making a big-enough pivot to be front-and-center where gamers are going, and this continues to show how risk-averse they are to change,” observed M2 Research’s Meloni. “This to me, over the long term, will not bode well for them.”