Battered bookseller Barnes & Noble has joined the slew of vendors releasing new tablets for the holiday season, announcing the latest additions to its Nook tablet family on Wednesday, but the content that will grace their screens is getting just as much attention.

The tablets are the 7-inch Nook HD and 9-inch Nook HD+. The two offer ad-free content, are built around dual-core processors, run Android Ice Cream Sandwich, and have expandable memory through SD cards.

Come On In, the Content’s Fine

Barnes & Noble will launch Nook Video when the new tablets ship in October. This service will offer standard and HD movies and TV shows from major studios, networks, and content producers such as HBO, Starz, Disney and Warner Bros.

Games such as The Walking Dead, Game of Thrones and Breaking Bad will also be available.

Both new Nooks have an HDMI compatible port so users can connect them to their TVs to watch content.

Videos streamed and downloaded from the Nook Store are stored in the Nook Cloud so customers can watch them on other devices through new free Nook Video apps. The apps automatically sync between devices for a continuous viewing experience.

Forget the Bells and Whistles

“The video service is the real story, not the new devices,” Jim McGregor, president of Tirias Research, told TechNewsWorld. “I don’t think [the Nooks] are in the same league as Amazon and Apple, but they are moving in the right direction. Anyone can build a tablet but, as we’ve seen, few can sell one without the content and services.”

On the whole, “processors going into new tablets in most cases are way more than consumers need,” McGregor said. “When it comes down to performance, what’s really important is what people use them for.”

The Nook “isn’t intended to be a productivity tablet so performance is maybe third down on the list of features consumers will look at,” McGregor continued. “They will first want to know if it does what they want it to do, then does it have the content they need, and then whether they want a Barnes & Noble device.”

Tech Specs for the Nooks

Both the new Nooks have touchscreens that are integrated into the tablet bodies.

The 7-inch Nook HD’s IPS screen offers 1440 x 900 pixel resolution and is claimed to be the highest-resolution display available on a tablet in that category. It supports 720p HD video.

The Nook HD weighs 11.1 ounces and is 5 inches wide, making it more than 20 percent lighter and nearly half an inch narrower than Amazon’s Kindle Fire HD, a new version of which was announced earlier this month.

The Nook HD has a dual-core 1.3 GHz processor. It is claimed to be 80 percent faster than the Kindle Fire HD when it comes to graphics processing. It’s available in two colors, Smoke and Snow. 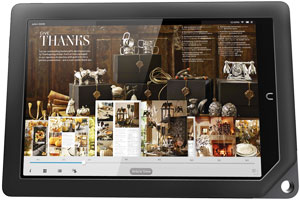 The Nook HD+ will sell for $269 and $299 and be available in stores in November.
(click image to enlarge)

Both tablets will ship in late October and be available in stores in early November.

Battling in the Market

There’s “a lot of play in the 8- and 9-inch space, and I’d say [the Nooks are] a competitive entry,” Rhoda Alexander, a research director at IHS iSuppli, said.

The Nooks lack a camera but “I don’t necessarily view that as important,” Alexander told TechNewsWorld. “When people evaluate tablets, they look at the specs they want, how the tablet feels and holds in your hand, and the content and overall user experience.”

The Nooks are light, and “weight could be a significant issue as people move forward,” Alexander said.