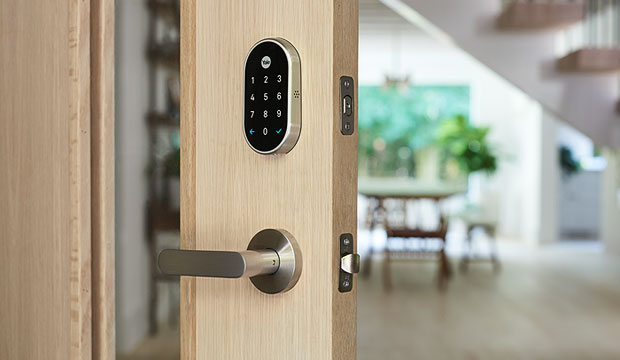 The Nest Hello video doorbell and the Nest x Yale Lock became available last week, and the company announced its new Nest Temperature Sensor as the latest addition to its smart home lineup.

Owners of the Hello video doorbell can use the Nest app for iOS or Android to see and converse with people without opening their door. The x Yale Lock — a tamper-proof, key-free deadbolt — also connects with the Nest app, allowing users to lock and unlock their door from anywhere. The Temperature Sensor works with Nest’s smart thermostats to control the temperature of the area in the device’s vicinity.

The Hello doorbell is available at Best Buy, Home Depot and Lowe’s, as well as on Nest’s website, priced at US$229.

The Nest x Yale Lock is available for $279 bundled with Nest Connect, which links it to a home’s WiFi system.

The Temperature Sensor is priced at $39, and a three-pack is available for preorder at $99. It is scheduled to ship next month.

These products have the potential to revive Nest’s fortunes. The company has been around for seven years, but there have been serious doubts as to its viability.

“It’s been a bit chaotic at Nest since its acquisition by Google,” noted Ray Wang, principal analyst at Constellation Research.

“It’s taken them some time to iron out the culture issues and get new product out faster,” he told TechNewsWorld.

The global home automation market is forecast to be worth $55 billion by 2022, based on Constellation Research estimates.

The delay means Nest has “fallen behind on brand awareness, but Google Home has the better algorithms and APIs, and so it’s well worth the wait,” Wang said.

Overall, however, Nest may find the market tough.

“There are other smart lock applications and devices,” noted Michael Jude, research manager at Stratecast/Frost & Sullivan.

“ADT has some particularly nice options,” he told TechNewsWorld.

Not Home? Answer the Door Anyway

The Nest Hello has an HD camera with a 160-degree field of view, a 4:3 aspect ratio, HDR imaging and night vision.

Its HD Talk and Listen feature lets owners respond even when they’re not at home, and echo cancellation provides improved sound quality.

It sends owners an alert even when visitors don’t ring the bell, and it is always on.

Subscribing to Nest Aware enables 24/7 continuous recording for up to 30 days. Owners can scan through their entire video history.

Nest Hello works with Google Home devices to announce if someone is at the door. It requires a wired doorbell, chime, and the right transformer. Nest recommends professional installation.

Amazon Is in the House

The Ring solution “has the option of battery power so it’s more likely to be able to function during a power outage if the network has a UPS, and it will install in places where there isn’t doorbell button wiring,” he told TechNewsWorld.

Further, “Ring should eventually better integrate with Amazon’s secure delivery solution and Amazon Echo once the acquisition settles,” Enderle said. The link to Echo would let people automatically see from inside the house who’s at the door.

With a Nest Aware subscription, video is streamed to the cloud for secure offsite storage. Each Nest Hello can upload up to 600 GB per month.

“If you’re going to use any HD video surveillance system, it would be wise to upgrade to a level that will exceed what that system requires,” remarked Enderle. “Otherwise, its capability may become compromised when you most need it to work.”

Nest Hello owners subscribing to Nest Aware will get familiar face alerts, but that raises some privacy questions.

The face-alert feature is unavailable in Illinois, because of pending biometric legislation there, noted Steve Wilson, principal analyst at Constellation Research.

There also could be privacy issues with Nest Hello, he told TechNewsWorld, because “consumers want to know where their facial scans are being stored and processed. Are they being sold to third parties?”

The Nest x Yale Lock can hold up to 250 passcodes that owners can hand out instead of a key. Homeowners can create passcodes and schedules for guests and anyone else who requires limited access. They can set the device to lock automatically when they’re away from home, and they can monitor who enters through the door and when.

Owners use the Nest app to lock or unlock a door remotely, or to check if a door equipped with the lock is open.

However, the Nest x Yale Lock “was built to Google’s specs and doesn’t appear to work with any other system,” Enderle pointed out. “Alternatives from Schlage and Kwikset are standards-based and work with ADT, Amazon and others.”