A team from MIT won the best overall design award in the first round of the Hyperloop pod design contest, held last weekend at Texas A&M University. About 120 teams participated in the event. 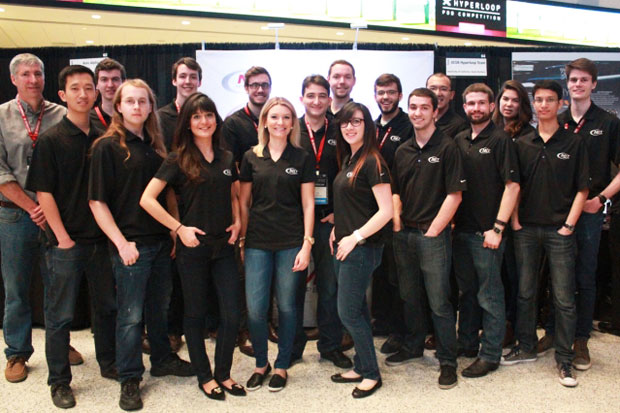 The MIT entry focused on speed, braking, stability and levitation.

Powerful magnets placed over a conducting plate — the aluminum SpaceX track — will accomplish levitation in an actual pod. The magnets generate lift.

The MIT team’s capsule, which is about 8 feet long and 3 feet wide, weighs about 550 pounds. It’s not meant to hold people or cargo.

The next step for the MIT team and other winners is to build small-scale prototypes and test them this summer on the mile-long test track SpaceX plans to build near its headquarters in Hawthorne, California.

The prototype should reach speeds exceeding 320 feet per second.

Pod construction at MIT commences this month. The team will test the pod in its own rigs, as well as in the tube built by SpaceX, prior to the final competition. The MIT team will try out its braking systems and super-strong magnets.

Final assembly must be completed by mid-May. Its 20-second inaugural run will be unmanned.

At the competition, United States Secretary of Transportation Anthony Foxx announced that it was worth considering a partnership between the public and private sectors to develop the Hyperloop concept further.

The program is authorized to award US$72.5 million this year “to support innovative concepts and solutions for meeting our future transportation needs, and to develop the innovative workforce that will make the future happen,” said a DoT spokesperson in a statement provided to TechNewsWorld by department’s Namrata Kolachalam.

“Hyperloop and other creative ideas could be proposed as themes for a University Transportation Center, as part of the full and open competition that will open this spring,” the spokesperson suggested.

The DoT’s support for the Hyperloop project “increases the viability of the result,” noted Rob Enderle, principal analyst at the Enderle Group.

“It should attract more sponsors,” he said, but “given this is the last year of the Obama presidency, it doesn’t have as much impact as it otherwise might.”

The U.S. once led the world in transportation, but “it’s behind in everything except planes now,” Enderle remarked.

The Hyperloop needs government involvement if it is to become the fifth mode of transportation, observed Vishwas Shankar, mobility program manager at Frost & Sullivan.

A 400-mile Hyperloop track between San Francisco and Los Angeles could cost about $16 billion, he told TechNewsWorld.

On the bright side, the tubes used to move the pods “could cost $20 to $45 million per mile — one-tenth the cost of a bullet train,” Shankar pointed out.

Ticket costs alone could bring in return on investment within 18 to 20 years, he said, “but the actual revenue flowing into the system from smart ticketing, advertising, trackside solar panel energy generation, in-vehicle services, and connectivity could accelerate ROI to a few years.”

The U.S. government could expand the Hyperloop “to at least 50 cities in the U.S. with approximately 20,000 miles of track,” Shankar suggested. Although it could cost at least $400 billion, “we could aim to make this money back within the next 5 to 10 years and reap profits thereafter.”

Although consumers would benefit, the Hyperloop project’s real potential “lies far East in markets such as China, where it will challenge bullet trains and high-speed rails,” he predicted.

The Hyperloop could help reverse a troubling trend, noted Enderle, “that has the U.S. bleeding technology leadership positions to Asia.”