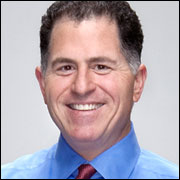 Michael Dell, CEO of the PC maker that bears his name, may be considering a buyout offer from the Blackstone Group — a bid that competes with a deal he put together himself — but only with some serious strings attached.

Apparently he not only wants the company to retain the Dell moniker, but also wants to remain in charge. If Blackstone Group can’t guarantee him the CEO spot, Dell reportedly said he would cash in his shares and walk away. That would mean his 15.6 percent stake in the company — about $4.5 billion — would go with him.

In February, Silver Lake Partners unveiled a plan to buy out the company for US$24.4 billion and take it private. That’s the deal Michael Dell forged. Microsoft is also participating with a $2 billion loan. The proposal soon faced opposition from Dell’s largest outside investor, Southeastern Asset Management, which cried foul over the $13.65 a share price.

Blackstone Group is reportedly offering $14.25 per share, while corporate raider Carl Icahn has called for the repurchase of up to 58 percent of Dell stock at $15 a share.

“He wants it to succeed, and he wants to be the one leading the way,” he continued.

“It’s somewhat ironic that the reason behind his wanting to go private — to escape the scrutiny and microscope of the public eye — now seems to be the force driving the complications today and possibly keeping them somewhat public,” Stice told the E-Commerce Times.

“The most important thing to remember in all this is how deeply invested Michael Dell is in his company — not in the sense of the shares he owns, though that’s a significant point, but regarding intellectual and emotional investment,” said Charles King, principal analyst at Pund-IT.

“When Dell returned to the company in 2007 and began driving what he called Dell 2.0, I doubt anyone expected the rapid, even radical transformation that resulted,” King told the E-Commerce Times.

“Staying on to finish that process — even if Blackstone were to succeed in its bid — would bring Dell a gratifying sense of closure. At the same time, Michael Dell is an able and astute businessman who knows when and how to walk away from a deal. That’s especially the case if Blackstone doesn’t come up with a worthwhile, guaranteed offer.”

Were Dell to walk away, it would make a buyout for any of the three interested parties much more complex.

“By cashing out, he’d take the value of the stock down sharply and damage Blackstone and the investors that remained significantly,” said Rob Enderle, principal analyst at the Enderle Group. “By doing this, he assures that the Blackstone move can’t work without him.”

This could make an employment contract with termination penalties so high that Blackstone couldn’t afford to fire Dell.

“He wants to assure that Blackstone can’t replace him as CEO and then break up the company and sell it in parts in a way that would destroy the company,” Enderle told the E-Commerce Times. “Either they do it with him or they don’t do it, because the alternative would be too high of a cost for Blackstone to bear.”

Michael Dell thus holds a very significant trump card in any deal in the works. It could enable him to preserve the company he built and ensure his legacy.

“Blackstone may or may not have been friendly to him in private, but in public it bandied about the names of some of his rivals as possible replacements,” said Roger L. Kay, principal analyst at Endpoint Technologies Associates.

“That’s not exactly friendly, but Michael could still do a deal with Blackstone,” he told the E-Commerce Times. “This is business, after all. People don’t need to like each other. They just need to do business. A Blackstone offer without him is highly unlikely, since they’d have to up the ante considerably.”

Oracle Co-President Mark Hurd’s name has been floated around as a potential Dell CEO replacement, which could be enough to make Michael Dell extra cautious.

If the Blackstone deal fails to gel, the question then becomes which of the other players could possibly step up.

Microsoft’s investment would be iffy, at best, if the Silver Lake deal fails to close. That agreement precludes Microsoft from participating in any other deal, Kay noted.

“Microsoft’s interest is in Dell’s survival as a major power in the industry and the existing relationship is between Steve Ballmer and Michael Dell,” said Enderle. “[Microsoft execs] are moving to support Dell as much as they can and would respond poorly should the company and Michael Dell part ways.”

Of course, Icahn could make a big move, but he “doesn’t appear to be really in this game all that strongly — though he could be a king maker should he suddenly switch to supporting one side or the other,” Enderle added.

Any Dell deal will likely require the stars to line up just right.

It will be a delicate balance, suggested iSuppli’s Stice: “keeping the investors happy, getting what Michael Dell wants, and doing what he thinks is best for the company.”