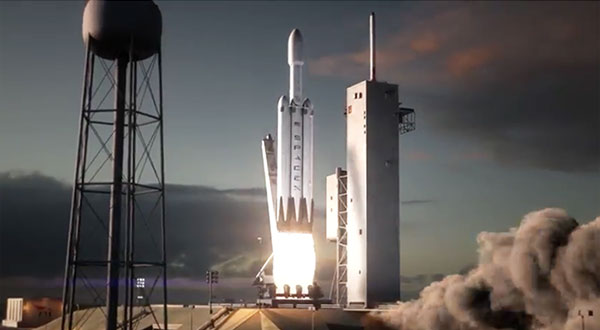 The SpaceX CRS-7 rocket failed minutes after Sunday’s launch, blowing up in mid-air.

Just after T+2 minutes, when the craft’s altitude was 32 km, its speed was 1 km/second, and its downrange distance was 30 km, its flight path apparently began curving downward. Three explosions then occurred.

“There was an overpressure event in the upper stage liquid oxygen tank,” SpaceX CEO Elon Musk tweeted.”Data suggests counterintuitive cause.”

The phrase “counterintuitive cause” bears some examining. If the pressure in the LOX tank was too high, a gasket would have blown and the tank would have ruptured. LOX would have shot out under pressure and been ignited when it hit the rocket flare. How would that be counterintuitive?

“When something like this happens, it will be unclear if the report sensor data is accurate,” explained Jekan Thanga, assistant professor in the SpaceTREx Laboratory of Arizona State University’s School of Earth and Space Exploration. “Such indications could be counterintuitive.”

What is clear is that the breakup happened because of issues with the second stage, Thanga told TechNewsWorld. “The first stage worked nominally.”

The flight path curving downward is for tracking purposes and to minimize aerodynamic drag at critical periods, Thanga said. It’s also due to the Coriolis effect, because the Earth is moving relative to where the rocket was launched — Cape Canaveral.

Following the explosion, the United States National Aeronautics and Space Administration, which had contracted with SpaceX for the flight to resupply astronauts aboard the International Space Station, expressed confidence in SpaceX.

SpaceX had demonstrated extraordinary capabilities in its first six cargo resupply missions to the ISS, NASA pointed out.

“The Falcon line has been a remarkably reliable launch vehicle,” said Mike Jude, a research manager at Frost & Sullivan.

The Falcon 9 used in the flight “is a new vehicle, and it attempts to use new materials to improve cost and reduce weight,” he told TechNewsWorld. “There would be some failures, but I think SpaceX have done a remarkable job in building a relatively reliable vehicle.”

The Pain of Progress

News of the failure drew some derisive comments.

“Did this explode because someone cut corners and was being cheap?” asked Kevin Davies in response to the first SpaceX tweet.

Musk has “launched payloads into LEO (low earth orbit), which is something humans have been doing for 60 years without him,” remarked “Jazz Purist” in response to Musk’s first tweet about the incident.

Many defended Musk, however.

“Start making a contribution to the continuation of the human race, like Elon tries to do then start talking,” Jake Scanlan tweeted in response to Jazz Purist.

Questions that Must Be Answered

There have been several recent commercial space launch failures.

An Antares rocket made by Orbital Sciences blew up shortly after takeoff in October.

Russia’s unmanned Progress 59 space Freighter began spinning wildly shortly after reaching orbit in March — it burned up in Earth’s atmosphere in May.

“Part of the problem here is that there’s a huge focus on cost and frequency of launch,” said Rob Enderle, principal analyst at the Enderle Group.

The failure of vessels from three entities “makes me wonder if there isn’t some common problem such as a shared component, sabotage, or a changed weather element we haven’t taken into consideration,” he told TechNewsWorld.

“This is the price paid for a field to mature,” ASU’s Thanga said. “Launch failures are part of the equation.”

One in five launches is expected to fail, remarked Jude.

The setbacks may not stop the commercial spaceflight program, said Enderle, but “will likely raise insurance rates for the rockets and their cargo.”