Is It Too Late for Homes to Get Smart?

Ten years ago, the “smart home” was all the rage. Almost every company in our market had a concept center or display house that showed the functionality of the digital home.

I remember a visit to GTE’s (prior to them becoming Verizon) offices in the Dallas area, where they had a multiroom digital home display that showed a variety of advanced communications, entertainment and home management features. It appeared that the world was quickly heading to a time in which consumers could expect much more out of their homes.

These mock-ups and broad strategies fell out of favor after the dot-com crash early in the ’00s, as companies tended to focus more on tactical solutions — concepts aimed at one or two main applications around communications and entertainment — and much less on the other smart-home applications around home control or home management.

There are exceptions, of course, but these have typically not been driven by the service providers. Microsoft has had a digital home in the parking lot of the Las Vegas Convention Center for the past few years. HP has had a mock-up in the parking lot of its Cupertino, Calif., campus for some time. However, most companies have tended to focus more on one or a select group of connected products (DLNA type of connectivity) instead of the holistic smart home type of concept.

As service providers withdrew from the smart-home space, the promise of an integrated smart home (providing consumers with flexible and convenient ways to manage their home’s security, lighting and energy management) has languished. So, while we see high penetration of data networks in Europe (thanks in large part to the active participation of broadband service providers deploying residential gateways), the penetration of systems such as home security has remained relatively low. 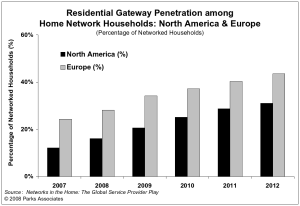 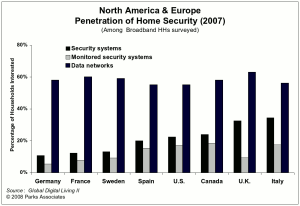 To bring greater lifestyle enhancements to consumers — better management of lighting, security, energy and health — service providers will have to become much more involved in deploying nodes and accompanying services. This list of players will include not only the broadband and television providers who are active today but also energy utilities, security companies, and healthcare providers. The good news is that the European market in particular appears to be experiencing a renaissance in service-provider activity in the digital home/smart home.

The European market for home systems and the smart-home concept in particular appears to be gaining traction because of current efforts by service providers, technology vendors and consumer electronics companies. Mobile giant Nokia is the latest service provider-oriented company to announce plans to engage in this space by focusing on how the mobile phone can help consumers better manage their home systems, including lighting, security, and HVAC (heating, ventilating and air conditioning). On Nov. 27, 2008, the company announced that it is developing a smart home platform, the Nokia Home Control Center. The platform will be the “basis for next-generation security, smart home solutions, and household energy management systems.”

The Control Center will focus on electricity usage control, device control, and monitoring for temperature, cameras and motion. Nokia envisions whole-home systems — such as security and HVAC — being integrated with the Control Center in the future. Users can then control all devices and systems with smartphones and PCs.

Nokia has started working with a number of companies to define and create a solid basis for building the next generation of products that will introduce a new kind of mobile access to intelligent systems at the home. These collaboration partners include Danfoss,Delta Dore, Ensto, Meishar Immediate Community (MIC), and Zensys. The Z-Wave Alliance (which supports the marketing efforts for the communications protocol developed by Zensys) is an active participant in the European market and has received support from the Energy & Climate Ministry in Denmark and Modstroem, a Danish utility company.

Nokia and the mobile phone industry are not alone in pushing smart-home developments. It is encouraging to see companies such as Echelon actively working with energy utilities on a pan-European basis to deploy its Networked Energy Services (NES) Advanced Metering Infrastructure (AMI) system. The company has announced smart-metering projects in Denmark, France, Russia, and Sweden, among many countries.

ZigBee is another core communications technology that is helping a growing number of vendors and service providers deploy energy management solutions in the European market. In addition to announcing support for Z-Wave in its Control Center application, Nokia is also supporting ZigBee, meaning that we’ll see this communications protocol in the mobile-led efforts in Europe as well. There is one announced deployment of a European “smart grid” solution in Gothenberg, Sweden, and the ZigBee Alliance notes that there are trials in several other European locations.

Additional European energy utilities are active with smart-meter deployments that could pave the way for additional smart-home applications. Landis+Gyr, for example, works with energy utilities in the Czech Republic, Finland, Italy, Moldova, Spain and Sweden to deploy automated meter systems.

EnOcean reports more than 500,000 of its self-powered wireless control systems are in use worldwide. Its recent partnership with LonMark International will help sustain momentum in residential markets. WeberHaus, a German home builder, installs EnOcean’s wireless sensors in its line of sustainable homes. Clients build single-room or whole-home control packages from a range of lighting, heating, window shade, security and central monitoring control devices.

Xanboo is another company targeting more integrated home monitoring and home controls solutions, and it is also targeting relationships with broadband and communications service providers. Notably, the company has distribution relationships with Elisa in Finland and security product companies in Italy and the UK.

Are Consumers Ready for the Smart Home?

As consumers grow accustomed to the advanced communications infrastructure coming into their home and mobile devices and the features that can be enabled via device-to-device (and system-to-system) connectivity, smart-home applications will be a natural addition to data, communications, and entertainment nodes already found in homes around the world.

Consumers in North America and Europe already show an interest in more enhanced control of home systems for lighting, security and energy management. It’s interesting to note that consumers in Italy and Spain express the highest interest in these functionalities. Both countries have service providers that have been active in smart-home technology deployments over the last decade. Echelon did early work with Italian energy utility Enel to deploy smart meters and accompanying smart-home nodes. Swedish utility Vattenfall AB has similarly deployed hundreds of thousands of Echelon-enabled smart meters. With the active involvement of these service providers, the consumer mindset about the smart home will be stronger in countries where people can be educated about the benefits of integrated and interactive home systems and smart-home features. 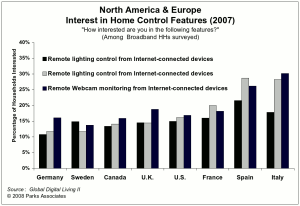 Interest in remote monitoring features is significantly higher among home network owners (and specifically those with wireless technologies) than consumers without these technologies. As Europe leads the way with advanced network deployments, the European service provider community in particular will provide a significant catalyst to the growth of additional home networking features, including more smart-home applications. Service providers have unique billing, marketing, and customer-support relationships with their customers, and they should leverage these to address the significant potential that advanced home networks and connectivity applications have to offer.

Kurt Scherf studies developments in home networks, residential gateways, digital entertainment, technology development in the housing market, and residential and building management and controls at Parks Associates.
Get Permission to License or Reproduce this Article

The Wide-Open Gateway to the Connected Home

How Internet TV Gear Can Stay in the Picture

Social Networks: From Media to Monetization to Multiplatform

Service Providers Compete on Technology – Why Not Support?

Are Web Video Providers on the Wrong Track?

A Fertile Field for Digital Television in Europe