Microprocessor maker Intel has announced that it has developed a research prototype that it says is the world’s first silicon-based optical data connection with integrated lasers. The link can move up to 50 gigabits of data per second — about as much data as that contained in an entire HD movie.

Current chip manufacturing uses physical connections, rather than light, to transmit information from one part of a computer or other electronic device to another. 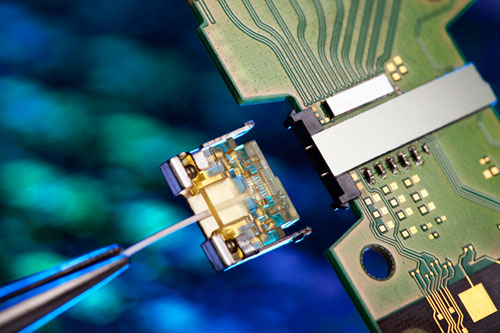 A 50Gbps Silicon Photonics transmit module (left) sends laser light from the silicon chip at the center of the green board, which then travels through optical fiber to the receiver module (right), where a second silicon chip detects the data on the laser and converts it back into an electrical signal.

The implications of such fast and inexpensive data transfer capabilities are far-reaching.

Intel’s prototype is a big step toward replacing cooper cables or traces etched on circuit boards to connect computer components and move data around in individual devices, says Intel. The restrictions of current methods mean that processors, memory and other electronics parts must be places inches from each other. Not so with a system that uses light.

“The kind of change this speed increase could cause could exceed our collective imaginations,” Rob Enderle, principal with the Enderle Group, told TechNewsWorld. “It effectively could make the location of most everything in the technology space irrelevant.”

Where in the World Is … Anything?

Silicon phototonics will have applications across the computing industry, according to Intel. For data-intensive video transmission, this is particularly promising. Recent advances in video applications such as 3-D HDTV could be popularized much more quickly because data bottlenecks would be alleviated.

“It suggests a future,” explained Enderle, “where we could have live streamed HD images from around the world. It suggests affordable HD telepresence where talking to someone thousands of miles away is no harder than looking through a window.”

In addition to far-flung family and friends, though, people could consult in a professional capacity with experts in fields such as medicine, without concern about where those experts are located.

“You could have the best doctor, even if that doctor is on a different continent,” Enderle mused.

Silicon in the Clouds

Data storage has become more decentralized with the advent of cloud computing and the cost and energy savings it promises. However, data-center design still must adhere to the limits of cables to connect devices.

Inexpensive silicon fiber optics, unlike its more expensive counterpart based on rare minerals, will allow data-center users to bypass some of those restrictions. Thus, search engine companies, financial institutions, and other enterprises that store large amounts of data worldwide, may be able to design cloud-based systems that significantly reduce costs.

Up to now, exotic materials such as gallium arsenide have been required for the manufacture of optical fibers. Likewise, telecommunications companies already use lasers to transmit information, but they are too expensive and bulky to be used for PC applications, according to Intel.

The prototype data link uses light beams from low-cost silicon and includes integrated hybrid silicon lasers. It is a step in what Intel calls its long term vision of “siliconizing” photonics. The transmitter chip is composed of four such lasers, whose light beams each travel into an optical modulator that encodes data onto them at 12.5Gbps. The four beams are then combined and output to a single optical fiber for a total data rate of 50Gbps.

At the other end of the link, the receiver chip separates the four optical beams and directs them into photo detectors, which convert data back into electrical signals. Both chips are assembled using low-cost manufacturing techniques familiar to the semiconductor industry, said Intel.

For next steps, researchers are working to increase the data rate by scaling the modulator speed as well as increase the number of lasers per chip. The goal is data transmission rates fast enough to transfer a copy of the entire contents of a typical laptop in one second.