The Japanese government on Tuesday announced it would be allocating US$473 million to help the operator of the Fukushima nuclear power plant, Tokyo Electric Power Company (TEPCO), build an ice wall to prevent water being used to cool it from poisoning the surrounding groundwater.

Currently, it’s estimated that more than 79,000 gallons of contaminated water are leaking from the plant into the Pacific Ocean every day. 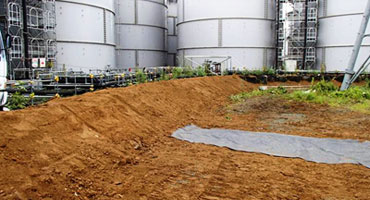 However, the proposed ice wall would be at best a short-term solution to the troubled facility’s problems stemming from a 9.0 earthquake and tsunami in March 2011.

The ice wall would be created by drilling 90-foot shafts into the soil surrounding the power plant and filling them with a coolant. That would turn the soil into a frozen wall that would keep groundwater from mingling with the water used to cool the plant. It would not, however, address the problem of what to do with the contaminated water cooling the facility.

“They’re running out of room for tanks to store the contaminated water,” Akira T. Tokuhiro, director of the nuclear engineering program at the University of Idaho, told TechNewsWorld. Tokuhiro recently visited the Fukushima site.

Reduction in the inventory of contaminated water that’s been accumulating for two and a half years is a major problem facing TEPCO.

“I’m not sure frozen walls are a good solution,” Tokuhiro said.

“They have to massively reduce the inventory,” he continued. “They have to filter off the contamination and boil off the rest.”

The fact that problems persist after more than two years is a sign to Tokuhiro that Japan needs outside help to address the challenges at Fukushima.

“They should reach out to the international community to ask for some expert opinion,” he recommended.

“That’s something they haven’t really done. The people who have the experience and solutions are in the U.S., Russia and France. [Japan needs] to reach out to the international community to identify where the leak at the plant is coming from,” Tokuhiro maintained.

“The technical challenges aren’t untenable,” he said. “There are people with experience handling those challenges, but the Japanese don’t have that experience.”

Seventy thousand gallons, or 300 metric tons, of contaminated water isn’t much compared to the volume of water in the Pacific Ocean, “but if you’re doing it every day and you don’t know how long it will be before it can be stopped, then it’s an issue that needs to be looked at,” Tokuhiro said.

“They should make Fukushima an international cleanup site,” he suggested.

The situation at the nuclear power plant is an unprecedented crisis that is getting worse, Tatsujiro Suzuki, vice chairman of the Japan Atomic Energy Commission, told the BBC.

In fact, it may not get any better for generations.

The long-term impact of Fukushima on the nuclear power industry remains to be seen.

“I don’t think it’s a coincidence that there have been a number of nuclear power plant cancellations or announced shutdowns,” said Shel Horowitz, coauthor of Guerrilla Marketing Goes Green.

“The economics have never made sense,” he told TechNewsWorld. “The safety has never made sense, and now with the public eye on it a little more than in the past, its flaws are painfully obvious.”

While Fukushima was a bad accident, nuclear programs continue to be pursued around the world, countered Eileen M. Supko, a principal with Energy Resources International.

“What has dampened building new nuclear power plants more so than being associated with Fukushima has been the current fiscal environment worldwide and the availability of funding and the low price of natural gas,” she told TechNewsWorld.

“But natural gas prices cycle up and down, and at some point, they’ll cycle back up,” Supko continued.

“I believe there is a value in having a balanced mix in the way we create electricity,” she added. “Nuclear should be a part of that.”