HP’s Web-Connected Printer Could Be a Game-Changer

In a move that could rock the printing world and set Amazon’s Kindle e-reader on its ear, HP announced on Tuesday an all-in-one printer that can connect directly to the Internet.

The device, the HP Photosmart Premium, will let users download content and make purchases from the Internet. Partners for content on delivery include USA Today; Google; and Fandango. 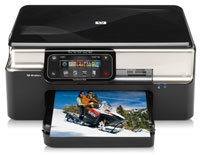 HP also announced the HP Apps Studio, from which users will be able to download apps and content on the Photosmart Premium.

Users can print directly to the device from their iPhone or iPod touch, as well as other devices.

The printer and the HP Apps Studio will be available in the fall.

Like other all-in-one devices, the Photosmart Premium prints, faxes, copies and scans.

It’s a color inkjet printer that has WiFi and Bluetooth connectivity.

Energy Star is an international standard for energy-efficient consumer products. Devices that meet its requirements save 20 percent to 30 percent on electricity consumption over similar noncertified products, on average.

The Photosmart Premium is also equipped with a touchscreen that HP claims is the largest LCD touchscreen of any all-in-one inkjet printer on the market. It has a diameter of 4.33 inches,

Online content for the Photosmart Premium will be available from the Apps Studio.

“The printer’s not designed for you to surf the Web; it lets you access apps we have developed and designed specifically to get the content you want,” Jeff Walter, marketing manager for HP’s inkjet business, told TechNewsWorld.

“For instance, you access your Fandango app and select the movie you want, select the show time and buy your ticket.”

The user needs to have a Fandango account, of course.

Content from USA Today, Google, and the other partners will be available at the HP Apps Studio.

HP is currently designing applications for this in-house and getting other apps from partners, but it plans to throw the application development process open to users as well.

“We’re working on a way for non-tech users to create apps on their own,” Walter said. “We use an open API and SDK.” HP Apps Studio’s API and SDK are based on Java.

The printer will connect directly to a user’s Snapfish account for viewing, printing and uploading photos. Snapfish is a Web-based photo-sharing and print service owned by HP.

Users can also access projects from the HP Creative Studio. This has applications for both business and home users.

Home users can access an online game, print their own 3-D photos, get a new craft every day on their desktop, and connect to Snapfish, among other things.

Wireless Printing and Leveraging the iPhone

The HP Photosmart Premium’s WiFi and Bluetooth capabilities let users print directly to it from devices equipped with either of those communications technologies.

It also lets users print directly from the iPhone and iPod touch, which could boost its acceptance in the market.

“The connection with the iPhone has to help,” Laura DiDio, principal at ITIC, told TechNewsWorld. “It sold what, a million units over the weekend?”

Users who want to print directly from their iPhone or iPod touch must first download the HP iPrint Photo app, which is available free from Apple’s App Store.

Raising the Bar for Printers

The Photosmart Premium’s features change the face of the feverishly competitive printer market.

“We absolutely see this as a game-changing device,” HP’s Walter said.

“Over time, we’ll see its capabilities in the rest of our printer lineup.”

However, HP needs to get enough momentum behind the device before it can reshape the industry, said Greg Sterling, founding principal of Sterling Market Intelligence.

“It’s very intriguing, and if you were to sell 500,000 or a million of them, it could be significant — just like the iPhone,” he told TechNewsWorld.

“It took the iPhone to popularize touchscreens on mobile phones, for example, even though the technology had existed before,” he noted. “Now every new mobile phone has a touchscreen.”

With its capability to print directly from the Internet, the HP Photosmart Premium may provide yet another lifeline for the beleaguered newspaper publishing industry.

“It could be an alternative to getting daily news,” HP’s Walter said. “Over time, you could design an app for yourself that takes and packages RSS feeds and content from USA Today and other publications, and you hit one button in the morning and print out your own paper with only what you want to read.”

That could impact Amazon’s Kindle, which some newspaper publishers see as a savior for their financially hard-hit businesses. The New York Times, The Boston Globe and The Washington Post are launching a trial program in which they will subsidize the purchase of the US$489 Kindle DX for customers with long-term subscriptions, for example.

The Photosmart Premium has a shot at disrupting Kindle’s market, according to ITIC’s DiDio.

“The powers that be at HP have probably looked enviously at Kindle’s success and considered how they can leverage that with what they’re doing,” she said.