Higgs Boson May Be Running Out of Hiding Places

Scientists are getting very close to proving or disproving the existence of the subatomic particle known as the “Higgs boson.”

The list of possible hiding spots for the Higgs boson particle has been narrowed down, according to teams carrying out experiments at CERN’s Large Hadron Collider in Geneva Switzerland.

The existence of Higgs boson — also know as the “God particle” — is key to explaining why there is mass in the universe. It will likely be another year before scientists have enough data to say whether the elusive particle really exists. 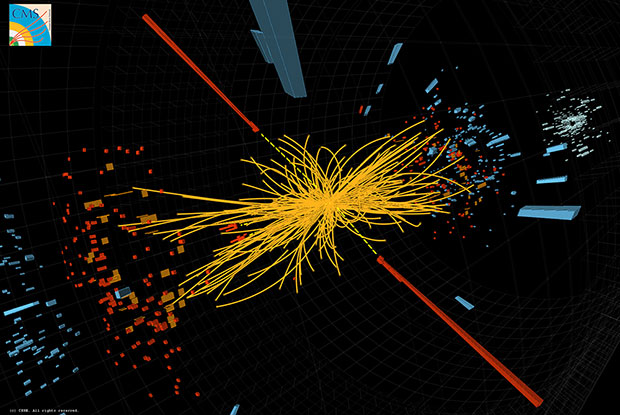 A typical candidate event including two high-energy photons whose energy (depicted by dashed yellow lines and red towers) is measured in the CMS electromagnetic calorimeter. The yellow lines are the measured tracks of other particles produced in the collision.

They have seen “tantalizing hints” in the mass region, but “we cannot conclude anything at this stage,” said Fabiola Giamnotti, an ATLAS spokesperson.

“Given the outstanding performance of the LHC this year,” Giamnotti said, there should be enough data to revolve the puzzle in 2012.

Scientists working on the CMS experiment at LHC also made some intriguing observations, excluding the existence of the SM Higgs boson in a wide range of possible Higgs boson masses, and expect data collected in 2012 to illuminate their findings.

For those who follow LHC developments, there are not enough superlatives to capture the importance of Tuesday’s announcement and the subsequent proof or non-proof of the Higgs boson particle expected in 2012.

“Consider this the biggest question of our time. Higgs boson is believed to be the fundamental building block for the universe, and it is undiscovered,” Rob Enderle, principal analyst at the Enderle Group, told TechNewsWorld. “Proving it exists and how it works goes to the core of why there is a Large Hadron Collider in the first place.”

The discovery of Higgs boson may be the key to understanding how to build matter from energy, Enderle noted.

Its confirmation would be “up there with the discovery of gravity and DNA,” he said. “It is likely even more important, since understanding this particle could change forever how we view reality.”

‘No Higgs Boson’ Would Be Big News

The fact that it may not even exist “in and of itself would be interesting,” said Enderle, “because that would mean some core calculations we use to explain how the universe works are faulty.”

If it does exist, the Higgs boson is likely a very large little particle.

It would qualify as “a massive elementary subatomic particle,” Charles King, principal analyst at Pund-IT, told TechNewsWorld. “It will also reinforce the Standard Model of modern particle physics, including the existence and creation of mass.”

The development and construction of CERN’s Large Hadron Collider underlines the importance of this point, he noted. “LHC’s funding was largely predicated on searching for and finding elemental particles including the HB.”

The biggest surprise might be that the Higgs boson particle doesn’t exist. The impact of confirmed nonexistence could be as great as discovering the particle.

“That point is obviously central to so-called ‘Higgs-less models’ which depend on other mechanisms for mass generation,” said King.

The Higgs boson quest is just one of the missions of the LHC. In another fascinating area of research, investigators reported indications of subatomic particles traveling faster than the speed of light.

If proven, “that would contradict Einstein’s theory of special relativity,” said King.