It’s difficult to talk about the Gxine multimedia player as a separate app fromXine. Both do pretty much the same tasks — let you watch videos and listen toaudio files. Both of these apps hale from the same Linux library of codecs andother gutsy stuff, Xine-lib. The key difference between these almost identicaltwins is the family lineage each one serves.

Gxine is a media player based on the GTK style GUI (Graphical User Interface)with a Mozilla plugin. It plays CDs, DVDs and VCDs in most of the popular mediafile formats. These include AVI, MOV, WMV and MP3 as well as MPEG1/2 andQuicktime files from local disk drives. It also displays multimedia streamedover the Internet.

Gxine played all of the less-common formats I threw at it from my eclecticcollection of audio and video files on several disparate Linux distros. In fact,Gxine performed as well or better than Xine itself and Gnome Mplayer. I didn’tfind much difference among these multipurpose media players aside from somequirkiness in using them on different Linux distros.

The Xine family of media players is fairly standard across the Linux lineup. Inmuch the same way as Microsoft’s proprietary Windows Media Player (WMP) is thego-to program on that platform, Gxine and Xine fill that role in Linux. WhileWindows users pay for that OS, the media player — like all of Linux — is free.

Deciding whether to use Gxine for both audio and video chores or separate appsis up to you. From a convenience factor alone, Gxine gets the job done withouthaving to run separate audio and video apps depending on the type of file youwant to play.

For instance, stand-alone audio players include apps such as AlsaPlayer,Aqualung and Audacious. For stand-alone video watching, apps such xfmedia do a fine job.

Ripping and editing audio and video files are beyond the scope of apps such asGxine and Xine, however. These apps are designed for listening and viewing, notmodifying or managing audio and video file collections. For that advanced usage,you will need something else. Again, all flavors of Linux have a heftyselection of stand-alone apps available for more than just viewing andlistening.

Gxine is a GTK+ based GUI driven by the libxine video player library. See adetailed list of all supported formats here. If this app isnot listed in your distro’s package manager, you can download it here.

Depending on your particular Linux distro, you might have to do some tweaking toget Gxine to play. It has a fairly light requirement. It should run on GTK+version 2.6.x. You will also need Xinelib and its dependencies.

I had no trouble running Gxine in Puppy Linux. It is part of the pre-installed,or base-level, apps. However, Ubuntu version 10.04 was another issue. I installed theapp directly from the Ubuntu Software Center, but until I had all of thedependencies added through the auxiliary deb package installer (not the nativeUbuntu installer), the program would start to load and would then drop out. Thatissue was absent in earlier Ubuntu issues.

This app is based on a series of plugin engines that supplement the Xinelibrary. Its modular, advanced multi-threaded architecture contributes to itsrelatively small footprint and speed. 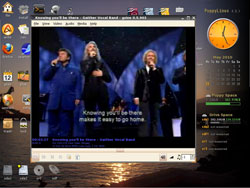 The xine-engine is the core that is responsible for synchronizing audio, videoand the overlays. Input plugins provide data as an abstraction layer for DVDs,files, http, pipes, VCDs. This eliminates the need to build in these routines inGxine itself.

Demuxer plugins provide Gxine with knowledge about the file formats’multiplexing. For example, it tells Gxine if the file has DivX4 video and MP3audio or MPEG2 video and AC3 audio. Decoder plugins get encoded data such asvideo, audio and subtitles and let Gxine display the data uncompressed. Ithandles encoding formats such as MPEG2, MP3, Ogg Vorbis and Windows Media Video.

Think of xine’s output plugins as drivers. By having them talk directly to thesystem, the xine-engine is freed from those details. Some video output pluginshandle several hardware capabilities like color conversion, scaling and refreshsync consuming less CPU processing.

Other plugins kick in to finesse the audio and video results before going tooutput. For instance, Goom is a visual plugin that generates colorful imagesfrom the music being played.

The Gxine interface is typical for a Linux app. The menu bar shows drop downlists for File, View, Audio, Media and Help. However, don’t expect to find anybuilt-in help. As I said, Gxine is typically a community-supported project. Noteven a link to an online help document is provided.

The File menu gives access to media types and playlists as well asopening specificfiles. It also has an extensive configuration panel. I especially like theSnapshot feature that lets me save the displayed image.

The Video and audio menus provide settings for video, audio and equalizerchanges. Other toggles are post-processing, deinterlace and the option toprevent screen blanking in windowed mode.

The most extensive list of choices comes in the Media menu. It is here thatlistening options are selected. An ample listing of musical categories availablefrom the Internet are displayed.

Under the News & Sport and the News & Talk categories is a much broader listingof both European and U.S. stations.

Once you configure the necessities and select the available plugins,Gxine can be a good choice for viewing and listening all in one place. It is designfor compactness and speed.

Gxine does not come with much glitz and glitter, but it gets the job donenonetheless.