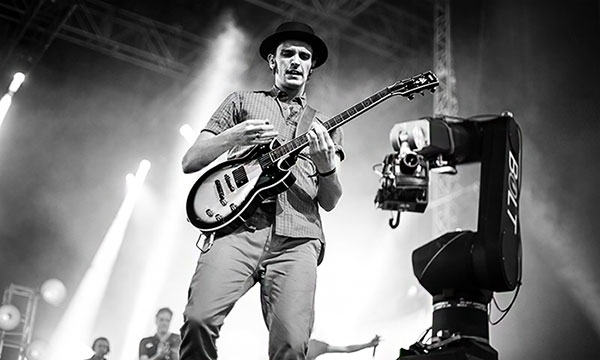 Activision on Tuesday took the wraps off Guitar Hero Live, setting the video gaming stage for a battle of the bands.

Though Guitar Hero’s original developer left the group years ago to work on Rock Band, the series is in capable hands. DJ Hero developer FreeStyle Games has been prepping Guitar Hero Live for its fall release, which may be right around the time Rock Band 4 appears.

The philosophies of the two music games always have been different, and these latest versions are no exception. Rock Band 4 is focusing on backward-compatibility and building on its current community, while Guitar Hero appears to be taking a slightly more forward-facing approach.

The action in Guitar Hero Live will be controlled by a brand new guitar accessory, which will be a step away from past iterations of the game. The game, however, attempts to be inclusive by supporting every major gaming platform: Playstation 4, Playstation 3, Xbox One, Xbox 360, PC, tablets and smartphones.

Further distinguishing itself from its rival, Guitar Hero Live features a first-person perspective to envelop gamers in the experience. It places the player on a stage before a dynamic audience that reacts to how well or poorly the guitar hero is performing, according to Eric Hirshberg, CEO of Activision.

Guitar Hero TV, described as a “playable music video network,” will serve as the other hallmark of Guitar Hero Live. Players can choose from several channels and theme shows to star in music videos, to perform solo or to compete with other players.

The first-person perspective may be Guitar Hero’s winning feature, seeing that it’s no more of a gimmick than rocking out with fake instruments, and it’s just as novel as doing so.

“I think it’s an interesting addition to music-based games to have a first-person perspective,” he told TechNewsWorld. “That type of simulation-type of feel could be a good starting point for Guitar Hero.”

To resonate with players, Guitar Hero Live’s first-person perspective will have to feel realistic, noted Rob Enderle, principal analyst at the Enderle Group. If the virtual audience’s feedback addresses players’ performances enough to shake or massage their egos, then it could be a winner.

“If we don’t believe it’s real, then it may not have that impact on the ability of the gamer to accept that that audience praise that they’re getting is generated,” Enderle told TechNewsWorld. “Players still have to get the same kind of visceral energy that they’d get if they had a real audience.”

As the music game genre is reborn this holiday season, there will be a new wave of gamers who missed out on titles from the last generation. Those new gamers might be easier to attract, suggested Enderle.

“They haven’t been jaded on the concept,” he said, “so for them, this is all new and wonderful. Whereas, past players have seen that and done that.”

Along with attracting new music lovers, Rock Band 4 and Guitar Hero Live both have the potential to win the hearts of parents, Enderle said.

These games tend to get players out of their seats and moving around. They actually can be good for you physically. So if they can trade on that — the fact that they’re active games, rather than ones that keep players sedentary and pounding buttons — they could win the support of parents.

They also can win the hearts of parents by sparking a deeper appreciation of music in kids, observed Jon Peddie’s Pollack.

Music games like Rock Band and Guitar Hero can “be firm stepping stones to towards more serious games like Rocksmith,” he said, “or they could be just a fun activity for you and your friends in the living room.”