Google on Wednesday threw open the doors of its Lenoir, N.C. data center to the public, posting a virtual tour of the facility on Street View. 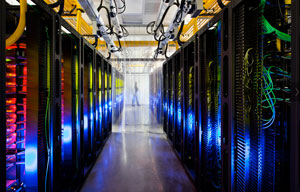 Inside Google’s Iowa network room, routers and switches allow the data centers to talk to each other. The fiber optic networks connecting Google’s sites can run at speeds that are more than 200,000 times faster than a typical home Internet connection. The fiber cables run along the yellow cable trays near the ceiling. Credit: Google
(click image to enlarge)

Meanwhile, a detailed story about the facility by author Stephen Levy, who toured the data center by invitation, is running in Wired.

Add to that a new section on the Google website that contains photos from Google’s various data centers, and you’ve got a regular media campaign.

“This is clearly about getting … publicity that isn’t negative,” Randy Abrams, a research director at NSS Labs, told TechNewsWorld. “Google can’t possibly find enough avenues to attempt to show they’re not evil.”

Recently, Google has had to fend off regulatory heat from the European Commission and the U.S. Federal Trade Commission over the consolidation of its privacy policies.

Or perhaps Google “is trying to get people to open up the insides of their buildings for view and are using this as a way to drive that behavior,” Rob Enderle, principal analyst at the Enderle Group, speculated. The White House is among the buildings with their insides detailed in Google Maps Street View.

The Lenoir data center photos put up by Google could be that of any data center’s insides except perhaps for the scale.

You kick off with shots of the front door and the parking lot.

Once inside, apart from close-ups of cabinets and a step ladder, you might as well be walking through a new box store that’s just been set up and is waiting to be stocked. One shot has ceiling-to-floor blue curtains and a cage.

Google has always been highly aware, almost paranoid, about security. Back in March, Google reportedly built servers in the dark at a colocation host.

Some say Google’s trying to keep pace with Facebook and other companies, which have released information about their data centers to the public.

Or perhaps Google’s not really giving away any critical information.

“There are very few people who would even try to exploit the knowledge of where the data centers are, and those who would can probably obtain the information by other means,” NSS Labs’ Abrams pointed out.

“Google doesn’t have to change any practices, change any code, or demonstrate greater respect for their users by showing pictures of their data centers,” Abrams continued. “It’s all sizzle and no steak.”

The people at Google “have no problem with people seeing what’s inside some of these areas,” Enderle told TechNewsWorld. “Security is about physical access.” Further, Google “can make the inside look like anything they want, they don’t have to show what’s actually there.”

The virtual tour “would help create the image that Google is just as open as they want us to be, regardless of the fact that they really aren’t,” Enderle stated. “One of their historic problems is that they are very private but don’t appear to believe that others need to be.”

That image of openness may well be needed — Google’s consolidation of its more than 70 privacy policies across all its products in March sparked outrage among privacy advocates, and led some users to state they’d cancel their Google accounts.

The EU now is reportedly demanding the company revise its privacy policy consolidation. The French data privacy regulator CNIL, which led the EU’s inquiry into this move, has given Google three or four months to change it or face litigation from multiple EU members.

“Putting a data center on Street View is a gimmick,” Simpson told TechNewsWorld. “It doesn’t reveal anything meaningful about how Google does business. Google says it wants to organize the world’s information and make it more accessible but, when it comes to its own information and procedures, the company remains a black box.”

Consumer Watchdog, which opposes Google’s privacy policy consolidation, praised the EU’s move and called on the FTC to take action against Google.