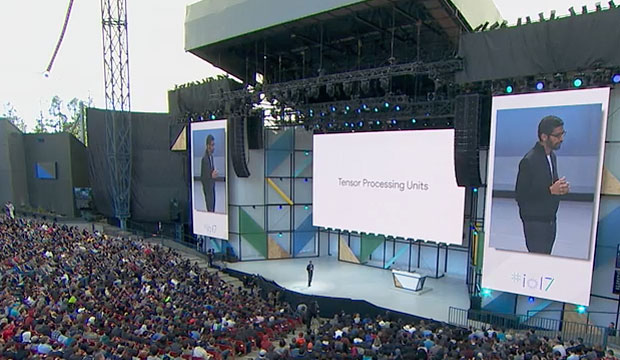 Addressing thousands of developers at the annual Google I/O conference on Wednesday, Google CEO Sundar Pichai outlined the company’s new strategy to transition from mobile first to artificial intelligence and machine learning. The goal is to equip the company’s line of digital assistant products and services to anticipate the needs of users, and comprehend sights and sounds in ways never before possible on a massive scale.

Google’s deep learning and computer vision capabilities have advanced dramatically, according to Pichai, and now impact everything from cloud computing to Gmail, search and mobile devices.

“We spoke last year about this important shift in computing from mobile first to AI first,” Pichai recalled. “Similarly, in the AI-first world, we’re rethinking all our products and applying AI and machine learning to solve human problems.”

Among the major new rollouts, Google Lens technology will become a part of Google Assistant and Google Photos. The technology essentially allows users to convert their smartphones into intelligent devices. They can use computer vision, for example, by pointing at a router barcode. Users can log on to a WiFi network automatically, or point the phone camera or point at a restaurant storefront and find out contextual information about its cuisine and ratings from a knowledge graph.

Following last year’s launch of Tensor Processing Units, which is custom hardware for machine learning, Pichai announced the company’s next generation of Cloud TPUs, which are optimized for training and inference.

Each Cloud TPU board has four chips inside, and each board is capable of 180 trillion floating point operations per second, he said. The cloud TPUs are designed for data centers — 64 can be stacked into one supercomputer.

A ‘TPU pod’ built with 64 second-generation TPUs delivers up to 11.5 petaflops of machine learning acceleration.

The Cloud TPU’s are coming to Google Compute Engine immediately.

The company plans to launch an effort to automate the design of machine learning models, using an approach called “AutoML.” The controller neural net proposes a “child” model architecture, which is trained and evaluated for particular tasks.

Google will be partnering with UC San Francisco, Stanford Medicine and University of Chicago Medicine to explore how machine learning can help advance patient care for heart failure, pneumonia and other diseases.

The new Google Assistant SDK will allow third-party manufacturers to make their products — like speakers, toys or other devices — available with Assistant built-in for the upcoming holiday season, said Scott Huffman, vice president of engineering for Google Assistant .

The service also will be available for the iPhone, putting it in direct competition with Apple’s Siri.

Google Assistant will be available in multiple languages starting this summer, including French, German, Brazilian Portugese and Japanese on Android and iPhone. Italian, Spanish and Korean will be available by the end of the year.

Among its new features, it will be able to support transactions, including receipts, notifications, IDs and more.

Over the next few months, Google will roll out more new features to Home, including hands-free calling to landlines and mobile numbers in the U.S. New entertainment services are coming to Home, like Spotify’s free service, support for SoundCloud and Deezer, integration with HBO Now, and Bluetooth support from any audio device.

In a nod to developer demand, Google announced that Kotlin will become an officially supported language on Android, the first new language added to the OS. Further, Google has entered a partnership with JetBrains to create a nonprofit foundation for Kotlin. Also, Android Studio 3.0 will be shipping with Kotlin out of the box.

The rollout of products and services was designed to establish Google’s bona fides as a company clearly driven by its AI capabilities, and the message was driven home that the company is putting its machine learning expertise front and center, adding more personalization and more contextual awareness.

“Relative to Microsoft and Amazon, I believe Google is far ahead, because it has access to more data than its competition,” he told TechNewsWorld.

“In order for AI capabilities to grow, it needs to train on large data sets, and Google has access to Android mobile services, Google search, Google Voice, Google Photos, etc.,” Krewell pointed out.

“This seemed to be more of a statement of direction, one that places AI as Google’s highest priority,” said Rob Enderle, principal analyst at the Enderle Group.

Still, Google is putting a huge amount of resources behind its AI focus and has enough of a war chest to back it up, Enderle acknowledged.

“Given we are at the very start of this race, it will likely come down to how long AI and machine learning hold Google’s attention, more than anything else,” he said. “Google has a shiny object problem in that they have historically had the attention span of a 4-year-old on sugar.”

However, unlike Google’s subpar efforts with Google+, Glass and Wave, artificial intelligence isn’t unique to the company, Enderle observed, which makes it unlikely the firm will walk away from it any time soon.